Added Antennas Direct VHF Add-On Kit to my Smarttenna. I originally picked the Channel Master Smartenna because it’s size was acceptable to my apartment complex and it seemed to do the job. Then comes the rainy season. My problem is primarily ABC channel 8 in Dallas. It is mostly viewable but sometimes with heavy pixilation. After the rainest Februay in history, I added this VHF add on. I seems to have not only boosted my VHF signals but helped some of my UHF stations also. Only time will tell but the VHF reception was pixilating, I added the add-on and got a good picture.

I will still think about a better antenna but I will see if this $15 add-on helps.

So I almost started of again. I changed my modem/router to seperate modem and router devices so I could have more control over my router. I am in the process of switching from a WD passport hard drive to a WD Elements harddrive. I hope this add-on improves channel 8. Regardless, the playback looks good right now. 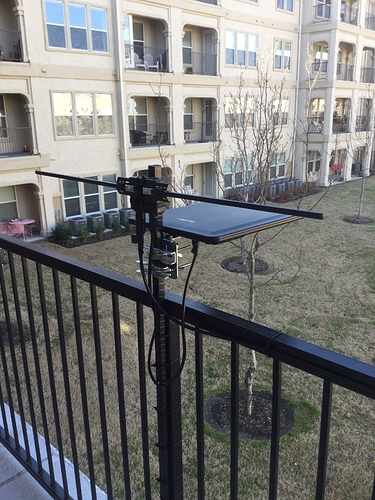 You could try adding an inexpensive preamp ($25) to see if that improves both UHF and VHF reception. One like the RCA TVPRAMP1Z which has separate UHF and VHF inputs. Route the VHF addon through the VHF port on the preamp and the CM antenna through the UHF port. This preamp acts as a combiner so you wouldn’t need the one that comes with the kit. It’s a moderate preamp that won’t overdrive already strong signals. Some forum members have tried it with good results (especially on weaker VHF stations which I believe Dallas ABC ch 8 is). It has an indoor power injector separate from the amplifier unit. The power unit can be indoors and the amp outdoors just under the antenna. Same coax transmits both power and signal.

Thanks, I’ll print the suggestion and keep it mind.

At first I had the Smartenna disconected and the VHF add-on was the only antenna. With just the VHF antenna, my UHF stations were getting as good of reception as they did with the Smartenna. Now I have both antennas connected together through the built-in junction box on the VHF add-on.

Oh and cut down that tree just in front of your balcony before it grows any taller. If you do it at night, no one will know…

All the tv towers are to the south and The tree is to the north. Also to the south is the building and power lines. Satelite was never one of my options, no line of sight. Maybe the trees added to the degrading reception when it got wet. The taller tree to the right is not in the picture. 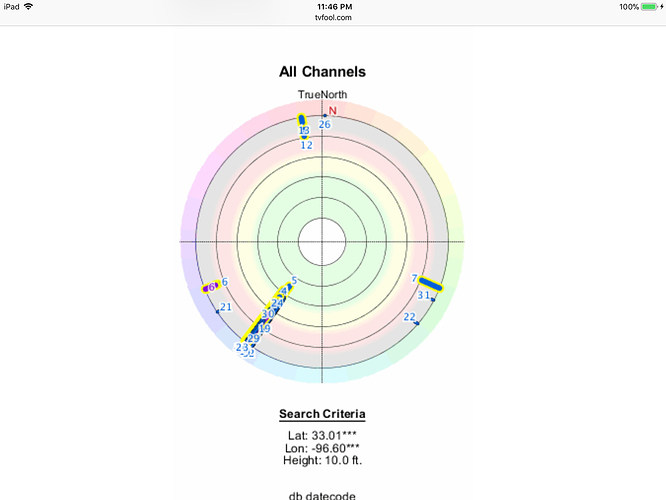 I just installed a WD Elements desktop hard drive to replace my WD Passport portable hard drive. I did a factory reset to clean things up and when I did the rescan, all the stations that I watch, show solid green. Channels 8 & 27 have always been 3 or 4 dots orange. I saw an increase in strength on all my channels when I added the VHF add-on, including an increase for most of my UHF stations. I hope this improvement is not a fluke and it holds true in wet weather. All the major stations are about 30 miles south of me. My apartment faces NNW.

I have a preamp but the VHF add-on has made the best improvement of anything that I have tried. If it works, it is $15 well spent.

Since the house stands between the transmitting towers and the antenna, the antennas in the open may be getting signals bouncing off objects in the area (like the mesh building walls). The CM as omni-directional is positioned to capture signals all around it.

Maybe adding a few more rods will increase the reflection…

Also a VHF antenna can get some UHF signals (not well) and the combiner is adding the VHF antenna’s UHF signal capture to that of the CM’s (if they are in phase). Summing up the signals together increases the signal strength.

Thanks, I just a tweaker. If it works, I ignore it. If it doesn’t work, I try things.

OK, what is the best way to do this? The 72 reading is after adding the foil reflector and the 55 reading was after I removed the foil. I got similar results for channels 4, 8, 11 & 27. I tried a cookie sheet and 2 types of wire cooling racks. Only the foil consistently boosted the readings over a period of time. I had considered ordering a reflector grid sold for use on the clear stream db4 and trying that out at different angles. Appearance is important.

I worry about what will happen to the reception as the trees grow.

Maybe adding a few more rods will increase the reflection…

Some suggestions (and I’ll try to see what others come to mind later):

I bought a roll a few years ago, cut it into three pieces and made a solid back reflector. Works magnificently for one of my antennas. This aluminum sheeting is the same material as your kitchen foil but sturdy enough for the outside. And foldable.

The reflectors pictured (the bottom and top reflectors) are called “trough reflectors” You might even make sort of a “V” or “U” with the foil to go under the antenna and over it but at angles that allow a signal through. It would resemble how someone at the beach uses a sun reflector on their face to direct the sun’s rays onto their face by holding it under their chin: 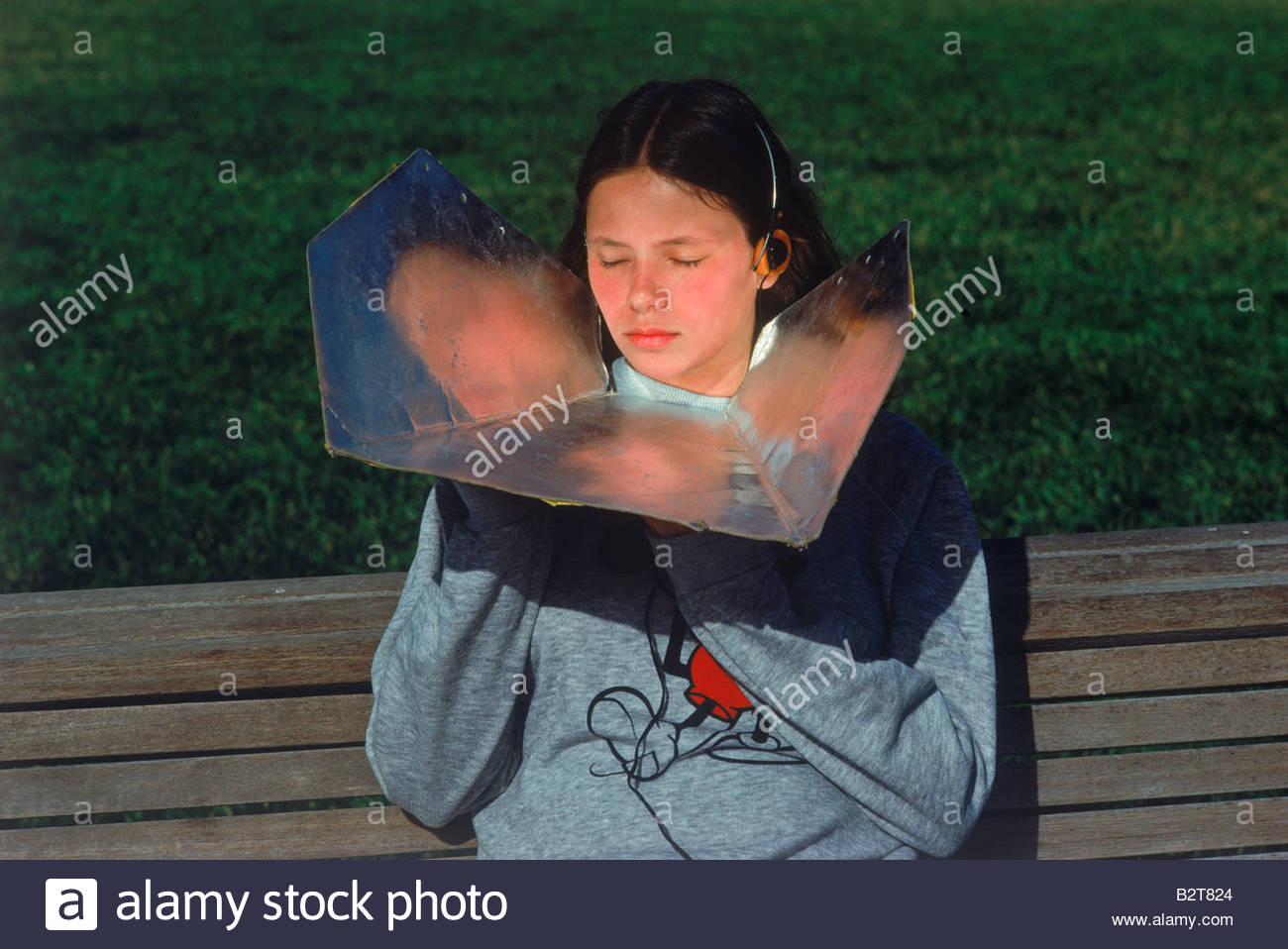 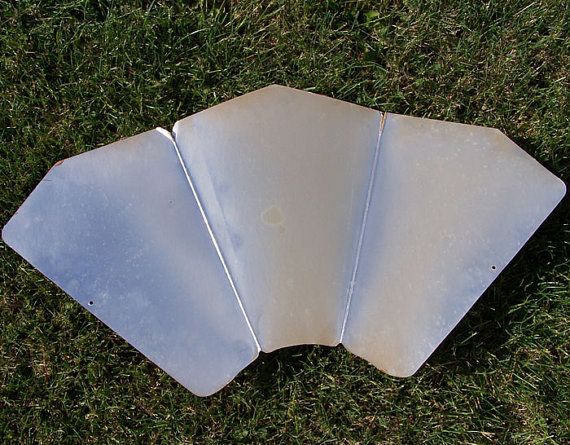 An antenna reflector in effect acts exactly like a sun reflector - to direct and deflect electromagnetic waves onto an object (and the sun’s rays are EM) from different angles. You might have to experiment to see what angles work so as not to block any signals.

BTW type in the words “antenna trough reflector” into Google and when the results come up, click on Images to see pictures of different types of reflector shapes that you may find useful (and aesthetic). Semi-circular shapes are also highly effective.

Get a tube (rubber, cardboard, plastic - any material). A tube like the one the foil comes wrapped around to allow for unrolling. Wind two or three times around the tube the kitchen foil you are using and make sure it stays wound around the tube. You may even want to stuff inside the tube more foil. Then stick that tube where you have the loose foil. Typically a good reflective aluminum rod or tube for UHF signals would be about 32 inches in length and one inch in diameter.

If it gives you the same results, then it means one can roll up some aluminum sheeting the same way to use as a reflector or even get an aluminum pipe (copper would be just as good). One can even paint a rod or pipe to match the color of your balcony railing and the paint won’t hinder the reflectivity of the rod.

Now for a reflector on one of my antennas I used chicken wire I had sitting around in my basement. Works great. But then your neighbors might consider you a redneck

hee haw. But this is Texas, right?

BTW the Clearstream reflector is not a bad idea (or even an old satellite dish which people have used as reflectors). Talking about satellite dishes, the best antenna ever built was the Channel Master 4251 which was one massive dish type reflector and a tiny receiver element (really just an old-fashioned two bay bowtie). The humongous reflector would collect all the RF signals and like a magnifying glass beam them back onto the small Radio Shack type bow tie. To this day nothing beats the 4251. But it is huge! It is the Mona Lisa of antennas - a thing of beauty! 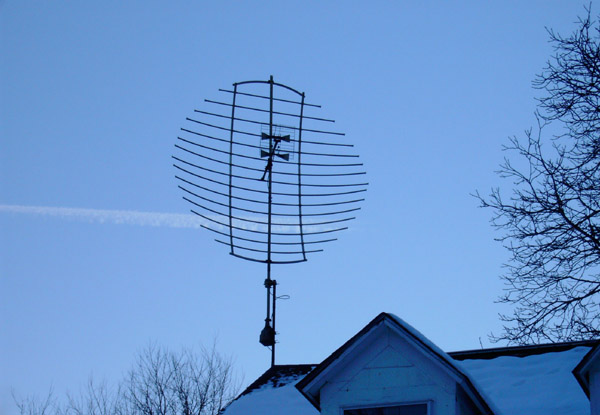 My wife and I were driving around one Sunday in the country and I spotted one on an old farm house. I whistled, “What a thing of beauty!” My wife looked at me and couldn’t see what I was looking at. “You lookin at a woman?” she demanded. No, I said, THAT antenna. She thought I was crazy.

Wonder what your balcony railing is made of. Lower the antenna and use the railing as a set of reflectors…

Wonder what your balcony railing is made of. Lower the antenna and use the railing as a set of reflectors…

Will try railings later in the week but the spacing, maybe too much for vhf but lowering the antenna sounds good.

I’ll play around with the foil on cardboard sheets and tubes to see what I can come up with. I was wadding up some foil that I had been playing with when the thought occurred to move the reflector !ower and point it up. I’ll work on that idea. Thanks.

BTW you mentioned that you had an amplifier. Not all amps are equal. Some amps I have bought from Radio Shack and Walmart were not good. They had high noise figures (6 db and more) and did more harm than good. The ones I would recommend would be Winegard, Kitztech, Channel Master and RCA (some RCAs not all). All these have NFs 2 db or lower.

In some cases a good distribution amp if the antenna signal is split many ways.

I tweaked my antenna today. I tried multiple reflector combinations but nothing made a reliable change in signal strength. I finally turned my VHF addon antenna and got an increase in signal power that has lasted all afternoon. I also removed my distribution preamp for an other increase in the signal strength. Now it is wait for the storms and see what happens. It would be nice if Tablo had a builtin signal meter for monitoring.

Ah yes, a signal meter for the Tablo (which everyone wants).

One way of getting one (but that would be an added expense), is to buy a USB tuner to use with a PC (and many of them come with a PC based real time signal monitor). But that is another $50 to $75.