Back in 2016 I finally got my Tablo able to receive some stubborn Philadelphia VHF channels with a combination of UHF bow-tie and VHF custom-folded-dipole attic antennas connected to a cheap RCA antenna amplifier/mixer. And I thought that was the end of it…

But then, around 2018 many of my 25 channels began to be pixilated and became unwatchable. I chalked it up to tree growth, rain, snow, and new building construction. Over time I also blamed aging equipment, maybe a bad amplifier, maybe even that my Tablo was getting old and cranky… Then about 2 months ago everything fell off a cliff, and watching every channel included audio and video losses in bursts as frequently as every 5 or 10 seconds. Making it even more frustrating, sometimes everything worked perfectly. But whenever I decided to watch the news it mostly became unwatchable.

My first guess was loss of signal. I watch news on Philadelphia channel 6 (lo-vhf actual channel 6 at 85MHz-ish, and difficult to receive), for which I had built a specifically tuned twin-lead folded dipole installed in the attic. So I designed and built a 3-element Yagi-Uda antenna tuned to channel 6 to boost my signal by about 7db. It is a lovely and huge antenna, made out of half-inch copper pipe… Unfortunately, that did absolutely nothing to improve the situation. (I’m an engineer, so building stuff is one of my go-to solutions…)

So I bought a cheapie wide-band signal strength meter from Amazon to see if I was aimed properly. Much to my embarrassment, I was receiving so much signal that the meter was pegged, even at its lowest gain setting… I had obviously gone completely overboard with improving the signal gain while making no improvement to the quality of my TV picture or sound.

So after a bit of research I came across the reallocation of television frequencies, and how 5G cellular was just last year being phased into the frequencies that were formerly used for television in my area. (And that around 2018, 4G did something very similar at 700MHz.) A little more investigation, and I found that my lovely, huge, high-gain, and very directional antennas were looking through a gauntlet of 7 or 8 cell towers almost directly between my house and the Philadelphia antennas… And some of those were 5G, in the 600MHz band, formerly UHF channel 36 and higher… Two of the towers are less than a mile from my house!!!

I purchased two Silicon-Dust 600MHz LTE filters from Amazon, and connected them between my antennas and my cheapie RCA preamp… And, voila!!! I have the best picture I’ve ever seen out of this system, with not a single blip of noise. Better even than it was in 2016 when I was struggling with antenna designs. Even snow on my roof doesn’t make the picture pixilate…

My symptoms were image pixilation and loss of audio that happened in bursts, sometimes every 5 seconds, but sometimes pausing for a couple of minutes. They always seemed to get worse after about 5:30pm, and got better after 10 or 11pm. And the problem was present on all channels, but worse on the weaker stations.

The moral of this story is don’t assume that you’re not getting enough signal from your antenna. In my case, the antennas were picking up the 4G and 5G cellular (LTE) interference just as well as they pick up television signals. (Because they’re the same frequencies as old television signals.) They were passing that signal to my preamp, which was amplifying the noise just as much as it amplified the TV signal. If you use an amplifier, you really need to get rid of the cellular interference before you amplify the signal. With any luck, this little bit of advice will help somebody solve their reception issue without resorting to building custom antennas… The Silicon-Dust 600MHz filters work well for me, and others have vouched for the Channel-Master 600MHz versions as well. Beware of the very cheap filters, since they’ll probably give you performance worth every penny that you didn’t pay for them… Also note that there are still 700MHz and 800MHz filters on the market that may not help you at all…Good luck, and don’t assume your antenna is the only problem that you might be seeing when pixilation strikes.

Great info! Also, depending on your use case, channel master also has some powered splitters with the LTE filters built in.

Thanks! I wanted to post this because I couldn’t find anywhere what the symptoms were of 4G and 5G interference. In my case it closely mimics a poor-signal condition, which was unexpected. I’m sure mine is not the only symptom that people will see, but adding a filter is a relatively painless fix if LTE cell interference is the problem you’re having.

99 times out of 100, reception problems are due to a change in something other than the equipment you have. Unless the dog chewed the antenna cable, or possibly wind blowing your antenna to point in a different direction, the reception problems are due to either the station doing maintenance, changing the power output, etc., or something new going online in the hood (like a new 5G tower).

Would a preamp that has built in 5G filter do the trick? One box replaces the 2 separate preamp/filter: 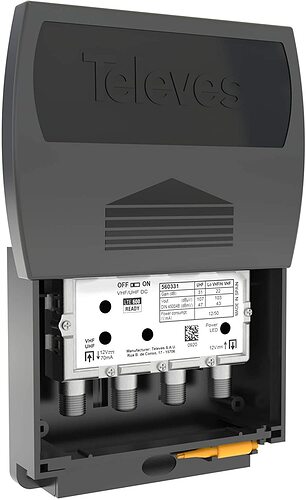 Yep, a newer preamp with the latest bandwidth (filters) would probably do the trick as well. I looked at that particular Televes amplifier and didn’t want to spend that amount of money until I was pretty sure what problem I was dealing with. And I also need to say that their product description of that amp could be better. Since I’m mixing separate UHF and VHF antennas in my amplifier I was trying to figure out how the 4 individual f-connectors are used, and the only information I found is printed on the label. It looks like it would do what I need, but didn’t fill me with confidence. (I spend a lot of my days interpreting 50-page product data sheets for components, so it’s just a personal quirk.)

The actual owner’s manual is even worse. I had to call Ness Electronics to decipher it. Once I got it figured out, it worked well. If you ever get one and need easy instructions, especially if all you’re doing is hooking up 1 antenna to 1 tablo, let me know. I created an easy 3-step cookbook on how to do it.

Edit: I’m about 11 miles away from the philly antennas, and channel 6 should be ashamed of themselves continuing to broadcast on lo-VHF the way they do. Fortunately I’m able to get good reception for the station.

I’m about 25 miles from the antenna, on the other side of the city. I’m not sure I get line of sight until I’m about 15 or 20 feet above my house. Definitely an inconvenient station to watch.

I’ve ordered a new amplifier that includes filters that will be here in a couple of weeks, hopefully I can forget about antennas for another few years after I get it installed. Keeping my fingers crossed.