I am new to the Tablo TV community and recently began running some tests to determine if the Tablo 4 tuner can be part of my solution to cutting the cable cord. I initially setup a Mohu Arc 40 HDTV antenna directly to one of my 4 TVs. I received over a dozen local channels and even a few from beyond the range that I had expected. Once I hooked the Mohu antenna to the Tablo 4 Tuner DVR (only one TV in use), the number of stations that I was able to receive was reduced to about 6-7. I even lost signal on some of the local stations. Since the antenna is in the same location as before and pointed in the same direction, I was surprised at the decrease in performance. I had assumed that the signal, once split among the 4 tuners would be amplified to maintain signal level. This doesn’t appear to be the case. Is this typical performance when inserting the Tablo 4 Tuner DVR into the mix?

And what was the signal strength of the various channels when the antenna was direct connect? Close to the digital cliff?

Maybe a amplifier would help or a different antenna or relocating the antenna even a few feet can help or repositioning the antenna a few degrees can help.

Is the antenna amplified? Tablo has internal 4 way splitter. If you are splitting it prior to Tablo that can be part of the problem.

Also if you’re going with Mohu for a nice indoor antenna, get the Mohu Leaf Glide. It is amplified and has a larger distance than your current Mohu. This should prevent the cliff effect.

I really had no way to measure signal strength prior before or after hooking the antenna to the Tablo 4, so no idea if i went over the “digital cliff” as suggested… Based on some comments, however, I realized that while configuring in the Tablo I moved my WIFI router next to the antenna so that I could hook the Tablo to my router via ethernet,. Perhaps that’s interfering with the antenna signal strength. My ultimate goal is to use a Mohu Sky 60 antenna, in the attic, so this wouldn’t be an issue in my final configuration. In the mean time, for my preliminary testing, I’m going to move my WIFI router or antenna so they are not in close proximity to each other. Thanks for the responses.

Based on several responses, I rearranged my physical configuration to move my WIFI router so that there are several feet of separation between the WIFI router and my HDTV antenna. I rescanned the TABLO DVR and found that the number of channels that I was able to receive was back to where it was when I had the antenna connected directly to the TV. Looks like a WIFI router placed too close to an indoor HDTV antenna can cause issues with the HDTV antenna signal. Who knew?

A large, flat TV antenna with a respected pedigree, the Mohu Leaf Glide failed to perform as expected. There are better Mohu models to be had, such as the nonamplified ReLeaf and the amplified Curve.

Anyone on here actually successfully using one now ?

The only flat leaf antenna I had luck with was the Winegard 5500A (with power injector). But It has a fixed coax cable.

I have a Sky 60 but never had any luck with it unless it was either outside or in a Window.

I’ve had good luck with a clearstream 2V with a power amplified from Channelmaster. But the 2V isn’t made anymore. They seem to have gone with a new model. So who knows.

I also used the Winegard FL5500A, which was decent. My understanding is the FL5500A should perform similar to a Mohu Leaf 50.

I eventually went to a Clearstream 4V, which definitely improved signal strength.

Agree. Ordered Mohy Sky 60 because it is advertised as multi-directional, and when I entered my zip code on the Mohu web page, it indicated that I should have reception for nearly 50 stations from both of 2 nearby cities. When I hooked up the antenna, I found that pointing it in one direction gave me good reception of signals for one of the nearby cities, but poor reception for the other. When I rotated the antenna 5-10 degrees, I was able to get good reception from the other city, but then poor reception for the one that previously worked. I couldn’t get reception from both of the nearby cities from any one antenna position. The total number of stations received, regardless of position, was significantly less than the Mohu web page indicated I’d receive. Big disappointment! Need to find a good OMNIDIRECTIONAL antenna.

Some good guidance here on what to do when you live between two broadcast areas:

Perhaps the distance factors into that equation as well direction when considering feasibility of using a multi-directional antenna?

It does. While most omni-directional antennas should easily be able to handle a spread of 6-8 degrees, it really depends on each unique circumstance. The further away you live from the towers, the harder it is to account for directionality as well.

The best omni/multi directional performance will be from antennas with positional bays like this one: 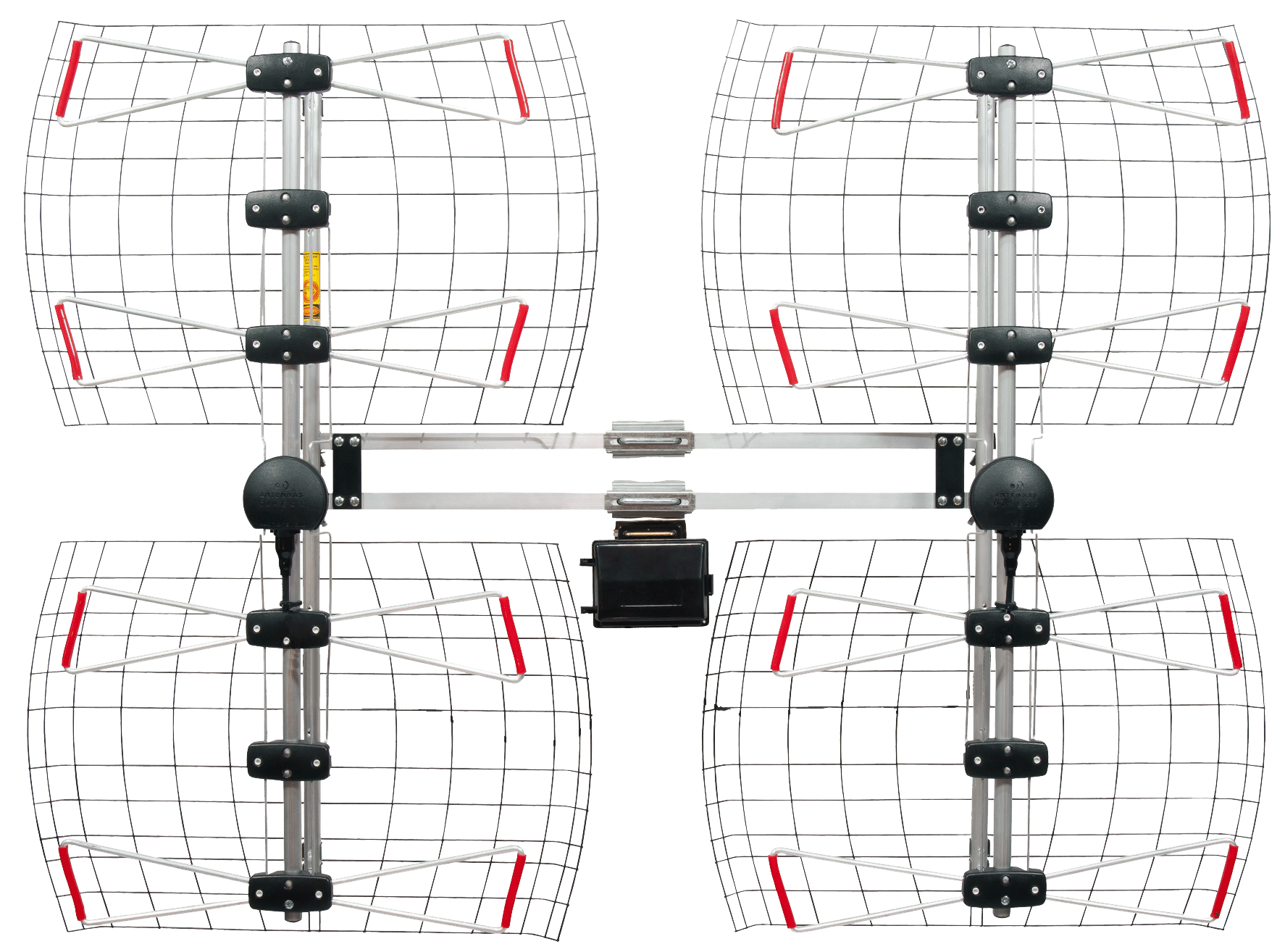 With these, you can tweak the sections for the best possible performance which isn’t possible with the flat style antennas.

This is helpful. Thanks.