Why are there ANNOYING ADS in the TV listings now? I paid for the TV Guide, NOT FOR ALL OF THIS CRAP THAT THEY’RE THROWING AT US NOW! I used to recommend Tablo but I may need to rethink their service if we have to deal with the ads now.

There are no TV listings in the Tablo app unless you’re talking about the Live TV grid.

I don’t see any ads.

What streaming device are you using?

On Roku and the web app they are mixed in with the TV Shows listings to look like other TV shows.

After looking closer, these seem to be several HSN shows using the same image scattered throughout the listings. I don’t remember ever seeing so many of the same images before. I guess I need to drop that channel. Sorry about that.

Can you take a screenshot to show us what you mean? Thought the show name was just text only, no images.

Apparently, HSN uses an image multiple times throughout the day for whatever it is their pushing at those times, jewelry, clothing, cosmetics, etc. I have removed that channel from my listing and they’re all gone now.

These aren’t all the same image, but only 9 of 21 are actually shows… the rest are “paid programing” aka advertisements. 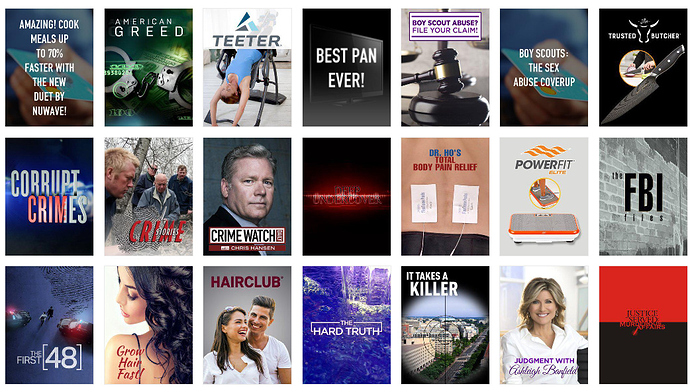 Many of these repeat across sub-networks, their images may have been more intrusive, leading to some misunderstanding.

But these images for actual shows though right? Like a 30 minute infomercial on the Powerfit for example?

But these images for actual shows though right?

Like a 30 minute infomercial on the Powerfit for example?

Most likely actual programing, yes. I’ve never recorded these, flipping through channels I’ve passed over some.

No. I tried to note, the images others may see might be more intrusive – but I’ve never seen any which I’ve mistook as actual advertisements from tablo/Nuvyyo or Gracenote.

They may also have a different meaning for “listing”, and there do appear to be some generic graphics uses, which may be repeated and misunderstood. 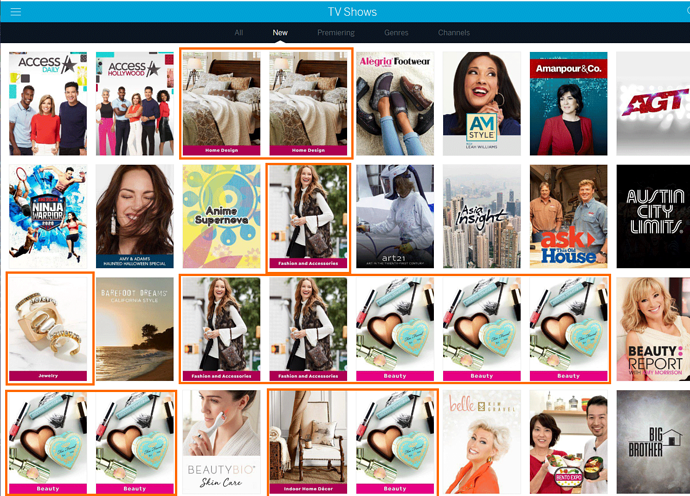 This is what I saw that confused me under TV Shows…New (outlined in orange). Note the duplicate images and the labels at the bottom of each one. This is HSN which I have now dropped from my TV listings.

I bet those are generic images from Gracenote, it the show doesn’t have a particulate graphic for it. If it’s called “home design” you get some home interiors image to fill the void.

I can’t absolutely confirm this, but I’ve noticed some “pictures” get repeated once in a while. Yes, that is a bit of an overload… In perspective of HSN, well then I guess all those shows aren’t so out-of-line.

But, yea, I kind’a see what you mean. Not that I’d see them as ads - they do look like somethings flubbed up.

Looks like we need to update this subject title. Given these aren’t Tablo ads, but are just 30 minute commercials camouflaged as “shows”.