I was wondering if there is a way to activate the Tablo app to behave like it’s running on Android TV on a “regular” Android device.

I have an NVIDIA shield tablet that I hook up to the TV from time to time in “console” mode. It has a game controller that I can control it with. The Tablo app does work, but it’s not really good to use because I have to point a mouse cursor at things on the screen. Looking at the screenshots that have shown up for Android TV on the NVIDIA shield (non-tablet) it looks like there is a totally different U/I that is more controller/remote friendly.

Can I activate that somehow? Or could you detect when I’m running the shield in console mode?
If not, could you guys add a switch in settings to turn this on?

Tablo is not an available source to Android TV. I wonder I put in the Tablo ip address followed by a series if I cold create the equivalent of “Bionic Woman” channel.

I’m not meaning the available source on Android TV - i mean the app is presented totally differently on Android TV. Looking at this screenshot: 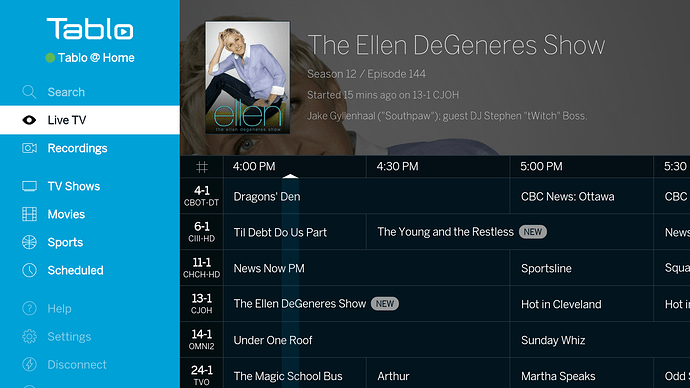 That’s not what my Android app looks like on the shield tablet. The one on shield tablet is not controller friendly at all either.

I just want to activate that interface on shield tablet.

This is what it looks like for me on Android. This was taken on my Moto X Pure Edition, but it looks the same on my Android Shield Tablet (in and out of console mode). 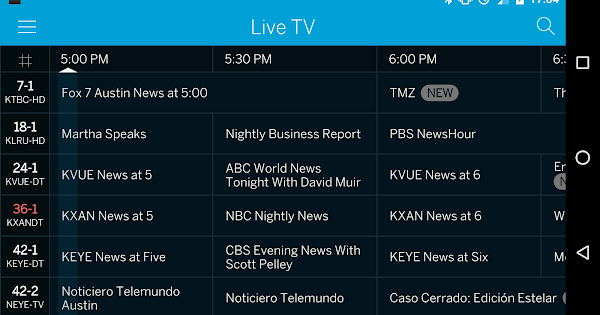 I believe androidtv has a separate Google play store. You might try file manager and send from androud tv to your phone. I haven’t tried that yet but have done phone to np.

I don’t actually have an Android TV system that I can pull the APK from if it’s different.

I’m hoping that the @TabloTV guys can chime in here on what is happening technically. If they’re different APK’s, any chance in merging this particular change into the one that’s at google play for regular android devices with a switch to turn on the behavior or something?

@Mario_Limonciello - We don’t have a Shield tablet to test on here but I’ve asked the Android team if they have any ideas for you. Stay tuned.

UPDATE - There isn’t a way to enable what we call ‘lean back’ mode in the native tablet app, but you can do it by using the web app on your tablet. The checkbox is in the settings screen. Try giving that a shot.

You may need to tell your browser: Request Desktop Site

Oh I just noticed you updated your response with an UPDATE. Thanks, I’ll try this tonight.

So does this mean that technically the apk used for AndroidTV, FireTV and regular Android are all the same but it activates leanback mode automatically based on what device it’s running on? Would the team consider adding a checkbox to force leanback mode and override this detection for cases like mine?

So does this mean that technically the apk used for AndroidTV, FireTV and regular Android are all the same but it activates leanback mode automatically based on what device it’s running on?

They’re forks of each other but they do detect ‘leanback’.

We can certainly explore adding that checkbox back into settings.

I gave the web app a shot requesting desktop mode and activating lean back in advanced. That’s exactly the ui I was looking for but unfortunately running in chrome it doesn’t pick up controller keys properly. Directional arrows navigate, but a and b for selecting don’t seem to do the trick. They close tabs.

So I guess it really needs to be done in tablo app which responds to the controller input buttons. Looking forward to that check box if you can add it to standard app to override the detections.