Just so I’m clear on this, your home Router needs to be capable of doing PAT (Port Address Translation) for this to work, correct? My Router which Comcast Xfinity supplies does not have that capability, only Port Forwarding to a specified IP address.

No, PAT (port address translation) is not required, and wouldn’t work with Tablo Connect anyway.
PAT does not allow a device to initiate a connection from the internet (outside your internal network) to your local network.

NAT (network address translation) is what your router will use, and port forwarding is what you need to set up.

For Example: I can configure an Internal IP Address 10.0.0.x to a specific Starting and Ending Port number to allow external traffic to forward to those ports. You can’t specify the External and Internal Port numbers. Only a specific Port or succession of Ports.

What’s the model number of your Comcast Xfinity cable modem?

Sorry, it’s actuall the Arris TC8305C but most of them are the same in terms of Port Forwarding configuration.

You have to configure Port Forwarding for the Tablo DVR under the Virtual Servers screen.

I have a D-Link router and port forwarding is done the same as with your Arris modem.

Here’s the configuration for my Tablo on my D-Link router. 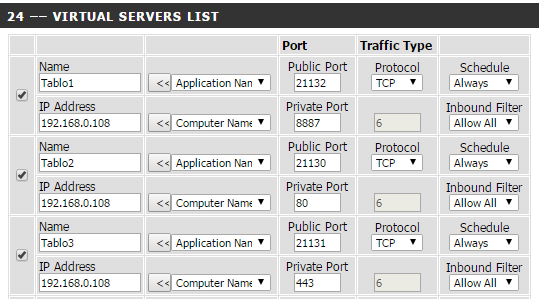 You have to configure Port Forwarding for the Tablo DVR under the Virtual Servers screen.

Nice that they don’t use standard terminology, aye?

It’s not an Arris, I made a mistake on the model. Like I said, it’s a TC8305C Mfg is Technicolor. User manual is out there if you Google it or I can email it to you. There isn’t any Virtual Server configuration on this box. Only the Port Forwarding of the same External Port to the same Internal Port pointing to whatever Internal IP you configure it for. The only other thing it has is Port Triggering. If you use Port Triggering it allows you to specify a Trigger Port From/To range and a Target Port From/To range. I’ve tried that as well and it doesn’t work. Why can’t the Ports that need to be open from the Outside be the same going in to the Inside device? I understand Port Translation is an added layer of security but most devices you only need to specify the same port that maps from the outside to the inside. If you tell me that I’m just going to need buy another Router I’m going to scream.

If you tell me that I’m just going to need buy another Router I’m going to scream.

I’m sorry, but scream.
Your current router’s port forwarding functionality doesn’t allow internal and external ports to be different.
And the port triggering option won’t work, because connections initiated outside your local network are not allowed.

Wait, don’t scream.
I just realized you can set the Tablo Connect Public and Private Ports to be the same by using a web browser, preferably Google Chrome, and going to:
http://my.tablotv.com

Here’s a pic of my example: 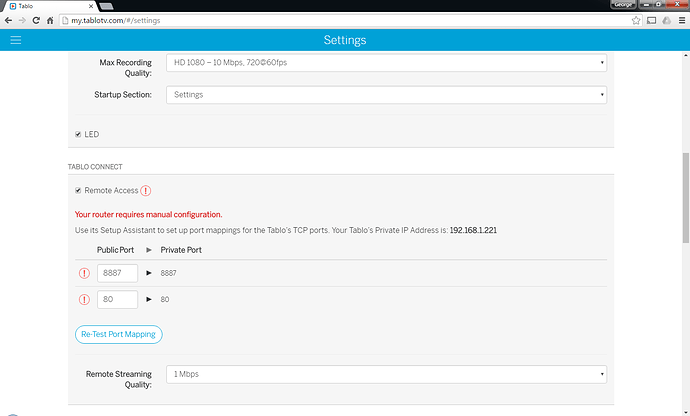 All Tablo Connect devices will use the same ports defined there.
Remote Streaming Quality selection is per device, by the way.

I didn’t set up port forwarding on my router, but I think this will work for you.

You used the words Google Chrome, I screamed. I’ll have to try it on the iPad. My PCs don’t speak Google Chrome (a discussion for another time). I didn’t even think about changing the IP in those boxes, didn’t know you could. Not crazy about opening 80 but I’ll try it when I get home. Here something to think about. This does work if I use the Tablo Channel on my Plex App. Only on Apple devices though. Figure that one out. Android it brings up everything but as soon as you try to play anything it barks and says you lost connection. Haven’t tried that on Roku from the Outside, have to go to my Neighbors to do that.

Just to be clear, this is not a Tablo issue. This is a deficiency in your Comcast supplied router. In the long run, you’ll be much better off getting your own modem and router. Or modem/router combo unit, rather than the POS supplied by Comcast. You’re probably paying $10/mo for it, so a replacement would pay for itself in a year or so.

I sure am. You obviously have never been caught in the typical Commy Cast finger pointing game. The problem is in your Router. We don’t support that. Ha! Yeah, I pay $10/mo for that peace of mind. I’ve only had a problem once in almost 3 years and guess what? I called them and said, it’s YOUR Router, I don’t support that! Fix it! ;

Haven’t tried that on Roku from the Outside, have to go to my Neighbors to do that.

Through Plex? How is it that it works on the Apple devices? I was kinda surprised when it did. To be honest, it actually streams better running through Plex and Guide is much faster. Probably because they scaled down some of the graphics.

Ok, scratch this one off my list. Confirmed. Changed the inside outside ports to the same and it works. I’ll probably remove those 2 port forwards for this since it works through Plex without them on the Apple devices. I don’t really use tablo remotely much but it’s nice to know if I’m sitting at an office waiting or somewhere and I wanna watch the news or something I can. I’m past my 30 day return on this box so I’m stuck with it now and you with me so you’ll probably see me around the community now and then. To be honest, I’ve been on the fence about the product but not enough to make me want to send it back. There really isn’t anything else out there this far along that I know of that can act as a whole home ota dvr and work with this many different devices.

I’m stuck with it now and you with me

Welcome to the party, pal!