I’d like the ability to rename the guide channels, so I can easily see the network names instead of the channel identifiers. This would probably take the form of an alias for the purposes of display, with the original channel identifiers kept in the underlying data and channel scan.

This has been requested and we’re looking at different alternatives to making this happen.

I would love this feature as well. It’s very confusing figuring out channels by the station ID. I would sooner rename to Fox, ABC, NBC, etc.

It might require another field in the database. Somehow your names would need to go to the new listing as the new schedule comes in from EPG.
That might be what the holdup is.

Makes sense. I’m new to the Tablo community, I can be patient. This was always the first thing I did with Windows Media Center and other DVR apps.

@TabloTV This August will make a YEAR since you were looking at ways to add it, but you know what I would like fixed first, and it isn’t 5.1.

Came here just to ask for this! Could we please have labels for channels? They have weird names that dont match the well known stations.

This would definitely be an enhancement

Chiming in here to say that this is a much-needed feature. As a convert from WMC, I assumed this would be available out of the box and didn’t even think to check, it’s such a basic feature. To find it isn’t possible whatsoever is enough to make me return the Tablo and go back to my custom WMC guide.

I’ve been a tablo user for quite a while and this is my number 1 annoyance of what I wish could be done. The guide would be way better if either custom names could be entered or if the station name was automatically populated. Is there any update on this feature request?

I’ve been using the xbox one guide for a while, and without any renaming, it’s showing the good channel name, instead of the cryptic name/number we actually see on tablo guide. I would rather like to see it automatically instead of doing it manually.

And it’s doable because Microsoft did it!

Hey mate, what is a “good channel name”? I think the Tablo uses the official callsigns on the channels. Don’t know where they get those labels.

I don’t know neither how Microsoft did that, but I live in Quebec and in my location I’m able to consume 4 channels. In my Xbox guide, it show as : TVA, VTele, SRC and Tele Quebec. It even shows stats of what most people are watching right now.

And by the way, this guide is completely free… just saying!

I took a photo of what I’m talking about… 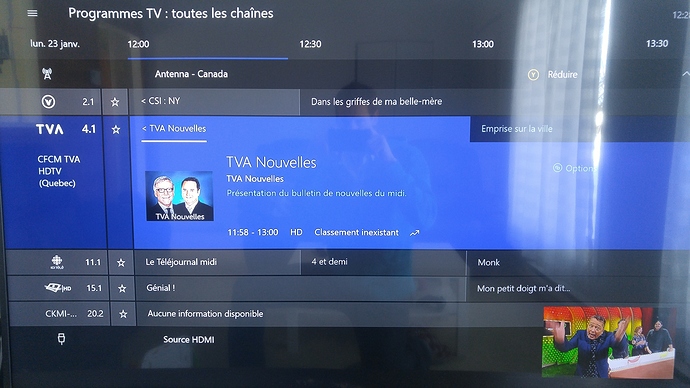 I would love to see this feature as well.

Yes! This would be a great feature, and probably not too hard to implement in a future version, I would guess.

Or icons for each network like a CBS icon or NBC icon. I guess it has to be call letters but in my case WWBT-12 NBC would be nice.

Great suggestion. +1 here too. Would love to see ability to either get the logos of the channels or just to allow us to customize the names. Let us name them ourselves…