Okay, I currently have a Clearstream cv2 I believe in my attic.

I pick up everything except abc. I am considering getting an antenna for just abc and combining it with my current tv antenna for abc.

I do subscribe to Sony vue but that is mostly for soccer with my boys.

I also have solar panels going up sometime this spring. So I’m probably going to have to mount my cv2 on the roof or an eave once that is finished.

Tvfool link at the top, what is the best way for me to get abc going here. I know it’s tough because it’s vhf and low power.

I am open to suggestions…

Your issue is ABC is a VHF channel rather than UHF channel - the Clearstream is a great UHF antenna.

Get a separate VHF antenna.

Which vhf antenna should I get? Any recommendations, and then what’s the best way to combine them to use with the Tablo?

Use this preamp to combine the UHF and VHF antennas. It is installed closest to the antennas. 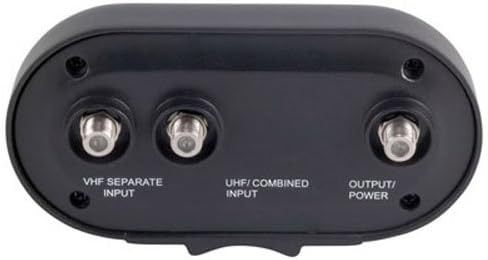 And the Clearstream 5 is a good VHF antenna. 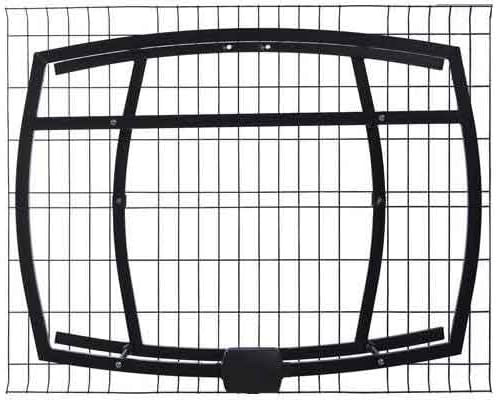 Both of those will likely solve your problem.

@Canons900 — Your situation is very similar to mine, except I’m south of Philadelphia and a little further away. I added a (very simple) second antenna in my attic specifically to receive channel 6. To do this I made a folded-dipole antenna out of old-fashioned 300-ohm twin lead wire. (See this web site: http://users.wfu.edu/matthews/misc/dipole.html ) For channel 6 reception, the frequency is 82 to 88 MHz, midpoint around 85 MHz. To make a half-wave dipole you’d need a 66 inch length of twin-lead wire, with the output coming out of the middle of the wire. (See the website for details.) I bought a 300 ohm to 75 ohm balun transformer from Amazon and attached it directly to the center of the dipole, and use that as the VHF input to an RCA mixing amplifier. This has worked well for me with the dipole antenna and the UHF antenna in my attic. I hope this helps…

How much for you to make me one?

Wow! This is interesting.

I am going to give this a try because ABC in Philly has become my white whale. I am determined that I want to bring this channel into my home.

I could just Vue and watch on demand, but to me this defeats the purpose of getting the antenna. I want all the locals so I can record the few shows I watch on abc, modern family, the Goldberg, shark tank, 20/20, etc.

I’ll buy the beer and food if you wanted to help me build one of these…lol.

I am planning on getting solar panels, how would I mount this outside at that point?

It’s pretty simple to make one, I’d be happy to lend a hand. I think I have a couple of Balun transformers hanging around, leftovers from my adventures… The folded dipole is exactly like to those FM antennas they include with fancy stereo receivers, but the length tunes it for TV channel 6. I have two in my attic, one tuned for channel 6 and another tuned for channel 2.

These things are floppy, like a piece of string. It’s difficult to imagine how to mount one outside, and then they’d also need to be bird, water, and cold resistant too. And solar panels blocking the south side of your attic would definitely wreck your reception from an indoor attic antenna.

I’m sorry to say that receiving low-band VHF television requires putting a long (half-wave-ish length) receiving element up, and it would need to be outside your house if you’re blocked by solar panels. A channel 2 tuned element will be about 8 feet long. This is why old-fashioned television antennas were so big. (And why the new little ones don’t work very well…) You don’t need a lot of directional gain, but the long radio-wavelengths for VHF are a killer.

If you’re going to resort to an outside antenna, then maybe a full-size outdoor antenna is a better choice. Something like an Xtreme Signal HD8200XL, or Channel Master CM3020. These beasts are about 9 feet wide by 11 feet long…

It’s really funny that there are a lot of these complicated 10-element Yagi antennas around, but none of the old big ones that had two to four elements that looked like a box-kite. In your situation you (and I) need the length to receive low-band vhf, but not the complexity and directional gain of a 10 or 15 element Yagi…

Give me a couple of days to play with this and build it and then we can go from there.

I am located in Blackwood NJ just about over the bridge. The Walt is literally 10 mins from my house. From my roof I can see Philly and according to tvfool, I am 17 miles from the towers and Los…

What are you planning on using to combine the VHF and UHF antennas?

Here is a non-soldering approach for a VHF antenna that just requires bending. Essentially it is the same concept as the dipole mentioned above: 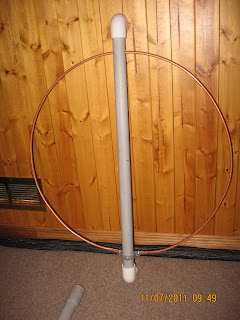 Personal Site of Projects being worked on. Summary: HTPC, Multi-Zoning Distribution, MediaPVR, UnRAID server, and anything in between.

Will also go outdoors. I’ve built one and it gets me all the VHF channels very well.

Doesn’t the Clearstream 2 have a VHF addon kit?

It does but it like I said it is hot or miss and mostly miss. I am liking the loop idea though.

Here is a quick and dirty version of it from the DigitalHome thread\forum:

Reflector is inside the box.

Even hangs nicely on a barn wall with spurs and saddle… 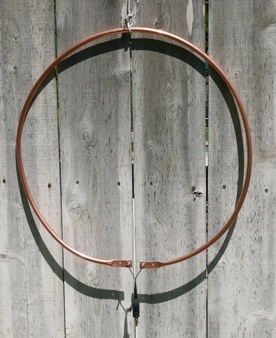 Circular antennas are very much like a folded dipole, but the problem is that the antenna impedance is a function of the shape of the antenna. (Yes, I’m an electrical engineer.) If you REALLY want to bend or solder copper tubing to make an antenna, here’s a site to visit: http://www.changpuak.ch/electronics/Dipole_folded.php This is a calculator that computes the dimensions for a 300 ohm impedance folded dipole, made out of copper tubing. Again, the frequency you want is 85 MHz for channel 6. I think the calculator asks for about half inch diameter tubing with about a 7.5 inch spacing between the two straight sections, with an overall length of about 54 inches… This will match perfectly with a common 300-ohm to 75-ohm balun transformer. (The reason you care about the antenna impedance is that the mismatch of impedance will translate into a loss of signal. Sort of defeats the purpose of building a perfectly tuned antenna.) So, yes, the diameter of the conductor and the spacing matter. The round antennas will work okay, but in this case a folded dipole will work better for about the same amount of work.

Oh, and someone asked about mixing amplifiers earlier… I went on the cheap side and used an RCA TVPRAMP1R that I bought from Amazon for about $25…

If you’re really into antenna construction, here’s a guy who designed three hourglass antennas for channels 2, 3, and 6, with his full antenna analysis. His design includes a 3 element reflector, and would be substantially better than a folded dipole:
http://imageevent.com/holl_ands/loops/ch2ch3hourglassloopreflrods

This antenna would be directional, and give you a bit more signal…

Okay that last post is just WAY over my head. I was totally lost looking at that page.

The circular antenna is definitely doable. But again figuring these calculations is tough for my addled mathematical brain.

I’d love to build it but now I am afraid I will get what I need and not build it to spec!

The thread at DigitalHome referred to above has simple to follow instructions to quickly and easily build an inexpensive loop. See especially the cardboard box version with aluminum foil reflector.

The one I built following those plans gives me 100% signal quality on channel 8 and 90% for channel 11 (I am 30 miles from the broadcast towers). Used 6 gauge copper wire from Home Depot 64 inches long bent into a 23 inch diameter loop.

I will definitely try that. It’s seems fairly straight forward. I really appreciate the help on this!

@Canons900 — Just a bit of warning (I’m sounding like a curmudgeon now), the circular antenna designs I’ve seen here are for “high-VHF” channels… Just FYI, channel 7 is NOT next to channel 6 in the frequency spectrum, there’s a big gap. Channel 6 is at 85 MHz, and channel 7 is about 176 MHz. (Channels 2 = 56 MHz through 6 = 85 MHz US are very close together, and are the "low-VHF channels.)

All of the circular designs I’ve seen mentioned here are designed to receive high-VHF channels. If you want to receive low-VHF effectively, the circular antenna will need to be about twice as large to give you a good signal on channel 6. As I mentioned, the problem with most small commercial antennas is that they aren’t big enough to pull in low-VHF television signals very effectively. It should be about one full wavelength around the perimeter of the loop. (That’s something like 132 inches for channel 6. About double the length of the original twin-lead folded dipole antenna I mentioned, since that’s just a squashed loop antenna…)

It’s going to be tough to get and will take some trial and error.

I know the channel is a bear to get in my area. But I want pull it in, we’ll just because.

It really annoys me it’s this difficult, but I understand why it’s so difficult. This is something totally new for me to try and I would like to show my kids a little something along the way.

Sure I may bag it and buy something, or just use PlayStation Vue to watch abc. But imo that defeats the purpose of what I was trying to do. Which is bag ALL of my locals.

More to come as I ponder all this information. I’ll post more, as I move forward. Today is homebrew day and next my oldest has a soccer tournament. So I’ll plenty of time to ponder my direction.

Of course I am still open to feedback and suggestions.