@TabloSupport I’m trying to use the app from the LG TV app store to see how that works on my TV. 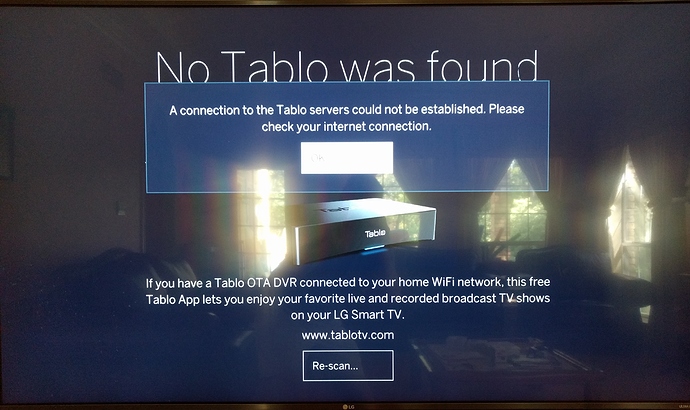 Other apps can connect to the network - Netflix, Amazon and a speed test.

Additionally, a connected Roku has no trouble displaying the Tablo interface.

I did check the network - it seems fine and I’m getting >70Mbps download speed on the LG TV.

I tried deleting the app and re-installing it. That didn’t help either. Any other steps?

I know our LG falls off the WiFi all the time, make sure your TV is still on the network.

Thanks! Initially that was the case, the LG TV did lose the WiFi connection (until a few days ago it had an Ethernet connection). I got the network set up, did a speed test and also tested some of the other apps. They were working fine. I got results from the Speedtest app and could load content from Netflix and Amazon.

Our servers did experience a brief delay in serving up connections around the time you made this post. If you open up the Tablo app now, do you have the same issue?

Thanks, it’s up now.