I’ve been on the fence about this device but decided today that i should just get it and accept the future world without Windows Media Center but at the last minute i saw a review on Amazon that said that this device doesn’t include the actual surround sound audio track. A quick search here confirms that that was at least as 3 months ago a true statement.

I just wanted to confirm for sure, that as of now 1/11/2016 that when using a Fire TV type device that i will not have surround sound when watching live TV or PVR content using Tablo?

That is correct. It supposedly still is possible with the current hardware, but it is highly unlikely to be implemented anytime soon.

Wow, thanks. That is what i was afraid of. I’ve had 5.1 OTA in my home theater since setting it up in 2001. I guess i’ll continue to wait and pray that microsoft doesn’t kill Media Center’s program guide. 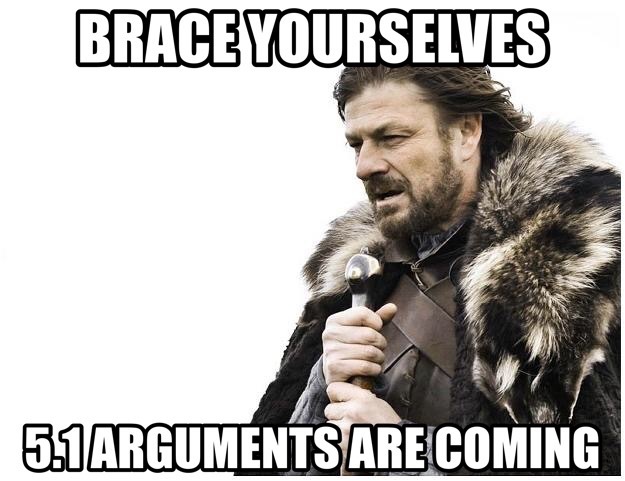 I am currently still in the process of setting up my 5.1 system.

When I finish, I will be sure to join you all in arms.

Has anyone tried having their AVR recode the 2.0 from the Tablo to 5.1? Wondering if either A. The 5.1 data is still there, or 2. If the AVR processors do a decent job of faking it?

I guess that i just naively assumed that it would work since, it’s “always just worked” with OTA HDTV. I mean, it’s in the transport file.

My current (doomed) setup is, an HDHomeRun network OTA tuner which feeds a Windows 8.1 PC running Windows Media Center. Those components are all located in the basement. The viewing room has a front projector connected to a Fire TV and the 5.1 audio (obviously) works just fine there. The network is easily 10x faster than it needs to be to do this, so it never occurred to me that it wouldn’t work.

I guess tablo is transcoding the content before sending it out which might make sense for viewing it on a phone but that’s a pretty out in the weeds bit of (admittedly cool) functionality that would have come a distant second in my mind to base functionality (like, getting the actually data from the OTA device to the viewing room)

Has anyone tried having their AVR recode the 2.0 from the Tablo to 5.1? Wondering if either A. The 5.1 data is still there, or 2. If the AVR processors do a decent job of faking it?

Yes, I use Dolby Prologic II for the recording, and my Yamaha receivers do an excellent job of faking it. My biggest disappointment is the simply the volume level and overall quality. Especially for shows with music such as American Idol, I would much rather watch the recording on Hulu due to better sound quality and marginally better surround sound. For other shows, the Tablo with Dolby Pro Logic II does just fine.

I still think it’s kind of ridiculous surround sound isn’t supported natively, I can’t recall any other electronic device I have purchased in the last 10 years which didn’t support it. Oh well.

I tried stirring up the sh*t on 5.1 in forums here last week, but nobody seems to care anymore, including Tablo. Like you so eloquently said @getcashmoney, “Oh well”.

Exaggerating a bit? Its not that no one cares, its that you asked for a definitive time frame on software development. That generally doesn’t go well.

Surround sound is definitely on my top 3 requested feature list, but considering DPLII is doing a decent job, I would rather have remote Tablo connect login credentials and Android TV voice search and Recommendations support first.

There wasn’t much of a response on the forums - just the usual few voices. And it’s been a long time since Tablo has said boo about DD 5.1 other than “It’s on the radar screen”. So are asteroids careening towards earth, we just don’t know if they’ll hit us and when (kinda like their response to DD 5.1…)

My guess is it’s too hard to do. They are keeping the door open so as to not say “no”, but not taking it seriously. This is the #1 thing causing me pause. To insert a 2.0 device into my 7.3 1080p 3D Projection Home Theater seems like a joke.

DPL II does a decent job in faking it.

Being more vocal about it and beating the dead horse even further is pointless.

Yet here I am…

I’m just grateful I now have a stable experience!

I know that this probably doesn’t help much, but it occurs to me that name of the device is “Tablo” which has the term tablet built into it. It was clear when Tablo came out that the ability to watch on a TV was an afterthought with only the Roku and AppleTV via AirPlay supported. After much discussion here and several surveys, the Tablo team became aware that most users wanted to watch on their TVs. By making the transcoded audio 5.1, would it not ruin the audio on any portable device? Should Tablo eliminate their original use case to accommodate a feature that, unfortunately, has not gained much traction from the two surveys that they have performed? Don’t get me wrong, I have a surround sound system on one of my TVs, and would love 5.1 pass thru.

It’s just too much overhead to deal with. Tablo already has issues with lip sync. I’ve had lip sync issues all along the way. I also use Tablo Ripper to move recorded files to my PLEX server and there are no lip sync issues in the recordings. What that means is, real-time playback uses just about as much power as the Tablo has to offer. There simply isn’t anything more to give to make 5.1 a reality in this device.

I’m just grateful I now have a stable experience!

Is that where the dead horse is kept?

Seriously, I started a thread on this waaay back in the beginning and it’s still very important to me. I’m a Tablo user that simply wants to have a full-featured DVR to replace what I used to pay the cable co for and surround sound is part of that. I might be in the minority in that I don’t care about accessing my recordings from mobile devices or “on the road.” I watch enough TV at home as it is…

What @snowcat said, but sans “anytime soon”. I don’t believe it’s coming. I’m glad to see these threads. It’s important to warn potential users who care about 5.1 that they aren’t going to get it.

Plus I get to chuckle when people chime in about software development and scheduling.