I am starting this thread for discussions of LTE filters and performance.

Although most of the time I have good TV reception, I am always looking for ways to reduce occasional pixilation, which may be due to 4G/LTE interference.

I have had good luck with this antenna. Most stations are >90 on a scale of 100, using an 8-channel distribution amp with 3-db gain per channel:

I do notice its frequency range includes the zone of possible 4G/LTE interference above 700mhz: 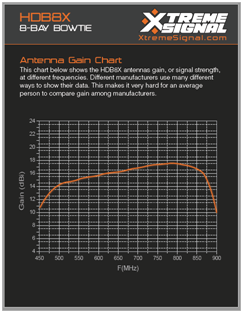 I have ordered this LTE filter from Amazon and plan to test results. This is the least expensive one I have found thus far.
The Channel Master CM-3201 at $25 is a bit too pricy for me:

I hope the images I have uploaded show up in the post. If not I’ll repeat the posts with URL links.

I wonder if a filter will make a difference, given the Tablo’s choice of tuner:

“The MxL603 makes use of MaxLinear’s “super radio” technology to provide superior rejection of out-of-band interference from 4G/LTE, Wi-Fi, MoCA and EoC signals, without the need for expensive external filters associated with competing solutions.”

Doesn’t hurt to try, though, so look forward to the results.

Good info, Dewi. One thing I am trying to avoid is any interference or strong signals above 700 MHz which could be having a negative effect on my distribution amps which are in the circuit before my Tablo and also serve several TVs directly, which sometimes show interference even with strong signals. Could be multi-path distortion, however.

I received today the 4G/LTE filter purchased for less than $8 with free shipping from Amazon.com.

I took A:B readings of all the TV channels I received without and with the 4G/LTE filter in the circuit. Before and after readings were identical, even though the specs called for a 4db insertion loss for the filter.

With an exception of one channel I rarely watch, all other channels read maximum signal strengths greater than 93 out of 100 on my 70" Sharp HD television. In times past I had noticed some occasional pixelation which seemed strange considering the high signal strengths, so I will be interested to see if this filter gives any improvement. My home is on an airport approach glide path so I may be affected by multi-path interference more so than 4G/LTE interference. With less than $8 invested there is not so much to lose in any case. At least now with the filter in circuit I should be able to rule out 4G/LTE interference as a possible cause of pixelation.

I am pleased to state I am seeing a clearer and sharper picture on my HD TV since installing this $8 British LTE filter. Some of the reviewers of the $25 Channel Master filter report similar results. As always, your mileage may vary.

The Channel Master LTE Filter works with all TV antennas to remove growing LTE signal interference from the broadcast signal your antenna receives.

Have fun, y’all, and good luck.

Ordered one. Have been exhibiting symptoms of 4G LTE interference for the past few weeks after having almost flawless reception for a decade. My wife noticed new mobile communications facilities going up in our neighborhood in the past two weeks while driving during the day! She’s seen trucks, engineers, installers, etc working at the streets around us.

What is your setup exactly? Antenna -> filter -> distribution amp -> Tablo/TVs?

What is the make and model if your distribution amp? Are you using a preamp too?

As the channel repack gets going and another slice of the UHF band gets apportioned to mobile communications, there may be even more LTE type interference in the future.

BTW though the Tablo tuner may reject LTE frequencies, LTE interference is particularly harsh on preamps placed before ANY tuners. As well for those splitting the signal between Tablo and TV, TV tuners themselves were never designed and manufactured to filter out LTE frequencies. Most ATSC based devices process the entire UHF band not recognizing that part of that band is now NOT television.

An additional problem is that after the repack has been completed and more of the UHF band is apportioned to mobile communication, existing filters will only work on the pre-pack band. New filters will have to be designed to reject the newly repacked frequencies.

BTW the FCC was aware that the LTE interference phenomenon would occur after the digital cutover but really did nothing about it… In Great Britain people were compensated for LTE interference; companies creating interference were required to supply homes with filters that were affected.

I have only 1-2 bars Verizon cell service at my house, therefore, I have to enable Wi-Fi calling on my phone…could this interfere with over the air reception ?
I have not experienced any 4G LTE interference and symptoms but I was just curious.

It’s mostly homes near cell phone towers or caught between a mesh of towers. It’s particularly felt in areas strong in 3G\4G transmission.

However in doing some more research on LTE interference, I came across this statement by a respected antenna analyzer\designer:

“Our antennas are now picking up hundreds if not thousands of individual cell phone transmissions that interfere with the upper UHF channels.”

So it’s not only cell towers…

This video on YouTube shows LTE interference effects on a scope:

Other videos show the effects of a near cell phone call on cable set top boxes!

It will take me a while to get part numbers and take photos but here is my general “one-line” sequential layout.

My Televes antennas have a built in active LTE filter. I’ve never considered that type of interference before. The antennas performance has been fantastic and there is a cell phone tower almost line of sight between me and the southern tv towers. Maybe the LTE filter is helping?

With a cell phone tower in line of sight, that was a fortuitous choice of antenna! Amplifier makers are now including LTE filters inside of preamps as well.

I’m a mile away from a cell tower and this would make sense for a lot of my intermittent pixelation/distortion/audio dropout issues. Just ordered one of the LTE filters. Thanks for the heads up!

Let us know how it goes. I’m having random pixelation too, not weather related so I may try one of these filters too.

I bought two of these - the Channel Master and the Kenable to see how each one does. I have actually three antennas so whichever does the job and is least expensive I’ll get a third. The first two are on the way.

My house has two cell towers - one a half a mile away and another on the other side of the house a mile away so I’m triangulated by these towers. But as someone indicated, it may not be just the towers but actual cell phone conversations in the area. One of the symptoms of cell phone interference is that these signals are actually quite strong and cause an amplifier to overload a tuner! That video I referred to above shows on a scope how much stronger these signals are than the normal UHF ones. I noticed that one of my preamps was showing overload via a flashing indicator at the time my signal started to flutter. Normally NONE of my TV signals come even close to overload as I’m 30 miles away from the TV broadcast towers.

How ubiquitous have cell phones become? Teenagers and parents now text message each other INSIDE the home. Heck, my wife calls me on my cell when I’m downstairs in the basement - why holler! Another YouTube video shows the effects of a nearby cell phone call on a set top box. Even though a Tablo filters out LTE, the preamps BEFORE it don’t. Channel Master and Antennas Direct have now started to include LTE filtering WITHIN a preamp. Televes and Antop have now embedded LTE filters within antennas.

LTE interference not only pixelates a picture but can knock out entire channels. People have had lost channels restored when inserting a filter.

However I’m also checking my home appliances since these can also be a source of interference - such as a thermostat. Older devices can become a source of electromagnetic interference as their connections wear out.

The question is if LTE interference is a cause of disruption, how many other Tablo problems are being caused by this phenomenon? We tend to hilight Wifi, hard disk errors and antenna performance but should LTE interference also be mentioned with respect to interrupted programming?

Link to one make of LTE filter.

Advertised at $7.14 plus free shipping.

Link to one make of LTE filter.

Just bought it, and thank you for the link.

There are some interesting differences between the Kenable (from Britain linked above) and the Channel Master one.

The CM on UHF blocks frequencies from 700 to 2000 (i.e. channels 52 and up). Since the current American UHF frequency band for TV ends at channel 51 that is perfect.

Tested today the CM and despite the 2 db insertion loss advertised shows NO degradation of signals. However I suspect that a slight diminution of signal strength does not significantly impact SNR (signal to noise ratio) since the two are different though related measures. Signal strength can be different from signal quality.

Will test the Kenable when it arrives. Thus far today with the CM no interference for 3 hours.