I installed 2 Televes Long Range Mix antennas back in 2016. One aimed north and the other south. They have built in amps and LTE filters. I assume the filters are 4G considering when I purchased them. They performed excellent in the beginning before the repack and the introduction of 5G LTE. Even my two VHF channels came in great. Now they struggle with several channels even in winter when the trees are bare. Some of these channels were in the 90 to 100% signal strength in the beginning.

I’ve been thinking they are being affected by 5G towers that are nearby. Looking at a tower locator map there are many between me and the broadcast towers both north and south.

So my question to anyone that may know. If my antennas have built in amplifiers and LTE filters (assumed 4G) would it work for me to add a 5G filter at my TVs or Tablo? From what I’ve read the filter should either be between the antenna and amp (not possible for me) or to place it at the end of the cable run just before it goes into a TV (or Tablo).

LTE filtering parameters changed after the repack I believe. I believe older filters may not be adequate (old filters started at 700Mhz . Newer ones start at 600Mhz). Also, filtering does add a minimal amount of signal loss (even for the TV spectrum). They are pretty cheap, so you could try it without a great amount of investment. I believe you could put it right at the Tablo. 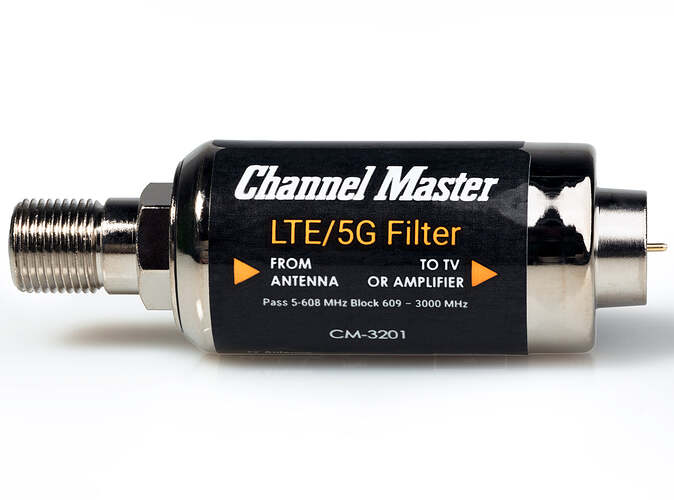 The Channel Master LTE Filter works with all TV antennas to remove growing LTE signal interference from the broadcast signal your antenna receives.

My non-technical understanding, LTE is a trade-name. Or a company which copyrighted/own the technology.

The numbering, often misunderstood as speed, because of the g/G is the different cellular generations. 3G 4G/LTE 5G - as exh new “generation” progressed.

I believe they added or combined the 4G/LTE to be consistence with the naming convention, while keeping the corp’s copyright. (the last part is my speculation)

So 5G may not necessarily be specifically LTE and then it’s less likely to use the same bandwidth or frequencies.

“5G” is different across providers as well.