After 6 months of mostly positive performance, my 4 tuner has been losing its wifi connection randomly a couple times per day. If I unplug the power and rep lug after ten seconds, it reconnects to wifi in a minute or two. Next thing you know, it loses connection again in a few hours. Definitely troublesome when recordings are supposed to happen and it’s not connected and I’m not home to fix it.
I did switch to wifi about 30 days ago. Had no issues first 3 weeks. No easy route to get the unit hard wired while also high up for best reception. I have no wifi issues in that room with phones, tablets, or other products.
Anyone have any tips? Thank you!

Why is your Tablo up high? If you need to overcome any cable distance losses, install a preamp at the antenna. There is about 5 db signal loss per 100 feet. A preamp will easily compensate for this loss (as well as boosting any marginal signals). If distributing the signal to a variety of devices, install a distribution amplifier instead allowing you to run a long cable from the antenna. With the Tablo moved lower, get it off wifi.

Another way to do it…

Both my Tablos are on the Top (3rd Fl) of my house.
Keeping the Tablos close to the Antennas at the highest possible point for best reception, then no extra preamps are necessary.

Tablos are connected to my router in the basement by TP-Link Ethernet Adapters, these get the internet signal to the Tablos through the house wiring.

@MarkKindle @cthompgh
Thanks for the input. My Tablo is on the 2nd floor of my home and the antenna up in the attic to get best reception possible. It used to be on the main floor, but antenna reception was poor. Upon the switch, I got better reception and more channels (still seems to get sketchy here and there which worries me come football season!). However, my older home does not have hardwired options to also move the cable modem &/or wifi router upstairs with it. Running a new line from upstairs to downstairs would be far from easy given the layout.
I don’t know much about the TP Link Adapters or Preamps. With all this being said, would you recommend one over the other? Both? I’d like a little better reception (have a Mohu Leaf 50, and live only 30 miles from major metro), but also not sure on signal strength for WiFi going about 30’ up and over to get to this area from the router area.
Thanks again!!

Firstly, you can get a better antenna in the attic than the one you have. This would improve your reception and signal strength. Get a bigger, better antenna since an attic can accomodate larger sized antennas. The more metal you throw at a signal the better reception!

I can’t speak for the Powerline Adapter Kit since I have never used one.

The Tablo can then sit anywhere below the attic as far as 100 feet away and the signal (with a preamp) won’t degrade (in fact may improve substantially with a better antenna). That’s 5 floors away!

Thanks, Mark. What do you have for antenna recommendations? My yard is lined about 20’ deep with trees before it opens up for the neighbors’ yard. It’s also a slightly hilly area and I’m probably 60% of the way “up” the hill. This is why I liked getting the antenna into the attic. I’m open to a new antenna, as the Leaf didn’t cost a ton upfront anyway. My bigger concern is getting more consistent reception for these providers that are only 30 miles away.

Do you have UHF (channels 14-51), VHF (2-13) or both? These are real frequencies not virtual channel numbers. An antenna type depends on which channels you have. Have you heard of TVFool? Try it and show us your channel distribution:

Also take a look at this thread in this forum (similar discussion):

Looking for some antenna advice. I will be moving, I have an old rooftop antenna in my attic currently, which I may leave behind and replace with something new depending on the advice I get here. I want to mount in the attic again at the new location and I have the ability to have power run to the attic along with my coax. Coax run will go from attic to basement where split (and possibly boosted, unless boosting at the source in the attic makes more sense) and run to the necessary rooms of the h…

Here’s what I got using TVFool:
http://www.tvfool.com/?option=com_wrapper&Itemid=29&q=id%3De2cbcae0d857d2
Even less than the 30 miles I assumed. Kind of frustrating the Leaf 50 isn’t doing a better job given this, no?

Not really because it is not only distance but the path in the report that is significant. You don’t have LOS (line of sight) but 1-edge. This means that the signal doesn’t have exactly a direct line to your location but goes through some terrestrial deviation (like a ridge).

You mentioned trees. Smallish type antennas don’t do well in wooded areas because the signal tends to get scattered by branches and leaves. The larger the antenna, the larger its reception area (signal gathering window). A 4 bay bowtie would do better in the attic in front of trees.

You have one significant VHF station (PBS). That might be picked up by a Channel Master 4221 type antenna though no guarantee since it is UHF oriented. However PBS is close enough to be picked up by rabbit ears; VHF is not as affected by trees as is UHF.

Some people at this forum have had success with an antenna like the RCA ANT751R in attics that does both UHF and VHF well. However a yagi may do less well than a bowtie in a wooded area…

The trees in that 70 degree direction are just a yard divider, but somewhat thick (20’) and are deciduous. My neighbors house (slightly uphill from mine) is probably almost at 70 degrees too which might be reducing reception. I’m not overly worried about PBS, would be nice to have, but it’s low on the totem pole over the typical local channels of ABC, CBS, NBC, FOX. Based on all of this which antenna seems like the best option for me to get the most consistent reception?

Check out also Antennas Direct Clearstream series of antennas. They come in different sizes and are designed for foresty areas. Several friends have them and like them. One can add a VHF retro kit to get VHF with the Clearstream UHF series.

To be honest, I would go with the Clearstream 4 which some people would say is overkill but I hate blips when watching football!!! I hate to see a long pass where one sees a QB throwing the ball, an interruption and then a second later the receiver scoring a TD. So I always go with the biggest and baddest antenna dude for peaceful, trouble free viewing. A Clearstream 2 would do the job but you have things in the way.

A Channel Master 4221 or AD DB4e are also good (the latter also has a VHF retro kit). The Clearstreams are the easiest to install (or mount) in an attic because of their shape and size.

A friend has a Clearstream 4 in the attic in his tree lined property and it does a great job without a preamp 30 miles from the broadcast towers.

If they’re all in the same general price range, I’m all about overkill. I’ve yet to be a “cord cutter” during football season. My well being can’t afford to have reception issues during the season!!
So it sounds like Clearstream 4: https://www.amazon.com/ClearStream-Indoor-Outdoor-Antenna-Mount/dp/B008PBTPOI/ref=sr_1_1?ie=UTF8&qid=1468516357&sr=8-1&keywords=clearstream+4+hdtv+antenna
$122 on prime seems reasonable.
So I’ll just have to mount this, reconnect existing coax up there to this and I’m good to go? That should handle my reception quality/ inconsistencies.
Question after that will be how I should address my Tablo randomly disconnecting and Roku Tablo app not being able to “find” it to reconnect unless I pull the power plug on Tablo for 10 seconds and then it reconnects just fine.

Antenna coax goes to Tablo below the attic. As @cthompgh recommended, Tablo wired into network (no wifi for Tablo just for Roku).

@MarkKindle @cthompgh Thanks for all your help. I’ll probably go with the ClearStream4 in the attic and the 2 TP Link AV500s to get better WiFi to the second floor from the basement router location. Cheers!

I’ve had best buccess with Winegard FL5500A in my bedroom window. Location of antenna makes a difference.

It also prevents anyone from peeping into your bedroom window…

Winegard looks similar to my current Leaf. I placed that one in an upper window too and results weren’t much better. I’m guessing I need a larger antenna size to have a larger catch radius given the deflection from trees, hills, etc in my area.

In terms of gain, the flatwave antennas average between 4-5 db; the Clearstream 4 between 7-8 (almost twice the gain). By definition and measurement the Clearstream 4 will have more signal strength. With 4 loops the Clearstream has two to three times a larger surface area for gathering signals. Attics were built for larger antennas than apartments.

BTW signals are always lower in the summer due to heat and humidity. Measuring signals in July is misleading for the rest of the year. The signal strength will rise by 20% in the autumn.

If in the future you need to get PBS on VHF - i.e. if the Clearstream 4 doesn’t bring it in by itself (it just may), here is the inexpensive add-on kit:

Easily add VHF signals to your antenna with this easy-to-install kit.

If it resembles rabbit ears, that’s exactly what it is LOL. Goes right on top of the C4. Has an in-built combiner to join the C4 with the VHF add-on. 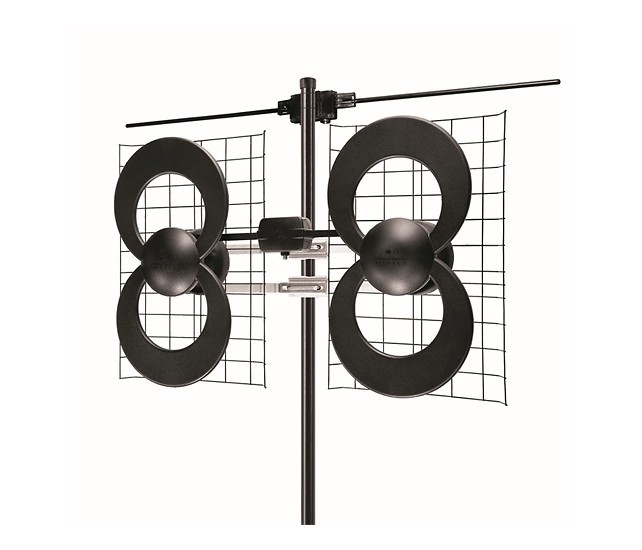