What happened to NFL recording information?

I used to open the folder of NFL recordings and see a list of who played who in the list that showed when it was recorded. Now it just says “NFL Football”. And even when I select a recording, it just shows date / time / channel info - absolutely no info about who played whom… and this is even applied to older recordings which were recorded showing the details of teams before.

What happened? Who in any universe could consider this an ‘enhancement’ to the user experience? I literally have to start a recording to find out which teams are playing in any specific recording now!

And if this is going to be blamed on the guide provider, then it may be time to think about either putting pressure on them to improve service, or find another provider!

Very frustrated by this.

Some info is gone, some is there (might not be visible, but it’s there). Info from guide provider is “there” just not shown anymore.

I don’t see the see the opponent info anymore on the recordings screen, but when I select a recording, it does show the two opponents.

Well, this is what I see using the Windows / Xbox native app (linked on public google drive folder since I don’t see a way to post images here)
https://drive.google.com/drive/folders/0B0aQ-5Ebn5lfdkN3QzlTZFhJeTA?usp=sharing

I do see the teams on the Nexus Player / Android TV app after selecting a recording, but seriously - what happened to ‘episode’ information on the listing screen?

If other programs follow this course, it may be the death knell for Tablo in my house. I can deal with it for football, although not liking it, but the wife is not going to want to open multiple recordings to find a particular episode of something.

Does this appear to be specific to the Nexus/Android app(s)? Does anyone have the same issue on the Roku app, for example?

@TabloSupport Its messed up on the Tablo itself. This is the web view in Safari. 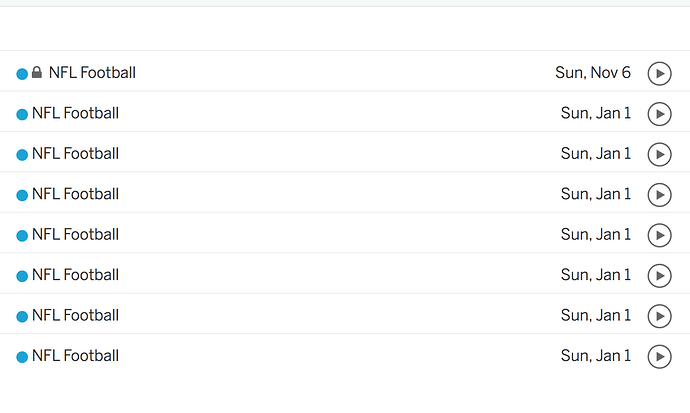 @TabloSupport - I don’t know about Roku since I don’t have one, but it is the same in Chrome browser as Android TV/Nexus Player.

Again, now I have 3 ways to view my recordings, and get 2 different views;

Android TV and Chrome Browser - Select the icon and it is just “NFL Football Date” all the way down, but do see teams when selecting a recording for playback. (added a pic of the Chrom view to the google drive above)

XBox / Native Windows App - Select the icon and it is just “Channel information Date” all the way down, and the only additional information when selecting one for playback is the time - team information is nowhere to be found until you start playing the recording and see the uniforms.

I believe the jsonForClient.description info was removed. The team data is buried in the meta data still through. With that said, it was good info when it was there, but obviously not fullproof. In other words, not quite as accurate as the team data at least for football. But still, it was nice for display and could be valuable for other types of Sports where teams aren’t interesting at all.

I had to make adjustments in SurLaTablo because of this information getting removed.

I don’t know anymore… it was too long ago tech-wise (days). But I checked on my iPad and I do see the teams. So… I don’t know. There was “something” to this… but can’t remember the specifics, too many other issues.