I have a relatively new Tablo Dual LITE and run into a few issues regarding tuners and recording conflicts several times per month. Here’s what I experienced most recently:

Two shows were scheduled to record at the same time. The first show started recording fine, but the second failed with the little exclamation mark. Attempting to tune to the channel to at least watch the live show failed with a no tuners errors. Multiple attempts cycled between the no tuners and poor signal errors. I then attempted to tune to any other station. This failed with the same cycling errors.

The recording that was successfully was less important, so I cancelled it. This allowed me to both tune and record the other channel. Interestingly, the original channel was still blinking red on the guide, but was no longer recording. Attempting to record other channels continued to fail.

After searching these forums for a bit, I came upon the method of viewing tuner status in JSON by browsing to http://tabloip:8885/server/tuners. Even though I was only recording one channel, the JSON showed both tuners being used. No other devices were viewing live TV, or even using the Tablo.

This ties in with my other question and perhaps this is just a misunderstanding of mine. When there is a conflict (legitimate or not) and the little exclamation point is visible on the show’s Info window. As seen in the screenshot I attached, the Options and Resolve Conflict buttons appear, but they are not clickable. The only way I’ve found to resolve the is to hunt the guide for recording channels. Is this intentional? Or should those buttons be clickable in some cases?

In general, it seems like this happens a lot, and the lack of feedback when you’re frantically trying to figure out why your favorite show isn’t recording can frustrating.

Thanks for any help! It’s appreciated! 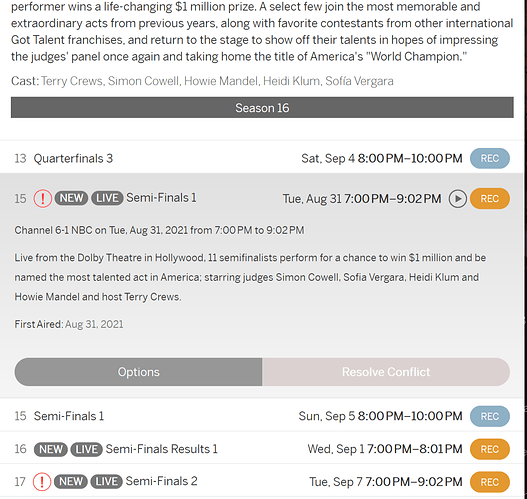 We’ve just sent you a DM with an invite for a remote session, so that we can take a look at your unit to investigate this.