If I can easily (or even automatically) sync my Tablo recordings onto a Plex server, and easily access the Plex server from multiple Roku sticks, that sounds like the best of both worlds.

I haven’t even started to research that, so I don’t even know where to begin.

Go to this forum and check out the various tools to copy the recordings from Tablo to Plex:

My sis and family go caravanning (travel trailer) and are thinking of doing the same thing, but only to watch their recordings and not bother with trying to set up an antenna at the camp. I’m pretty sure it would work if they also take a little router. They would take the Roku from their home tv to use in the caravan tv… Would that work? Thanks for the assist, mate.

Would they also have a live internet connection?

Most Roku devices will not connect to a router that doesn’t have a live internet connection. It fails in the 3rd stage of its connection process.

I think the other folks here are on the right track.

Use the ripper to copy the files to a USB hard drive.

Check with the router manufacturer to see if it can power a USB hard drive. You also may want a router that supports DLNA. If the router can power the hard drive, you can purchase a hard drive that does not require a separate power adapter.

When you want to travel you will just have to move the USB hard drive(and possibly power adapter) from your home computer to the router in the RV. Power down the computer or eject the the hard drive before disconnecting it.

I have tested this with similar devices, but not this exact combination. If someone has, please fell free and offer input.

Not when they’re pulling one of these into the campsite: 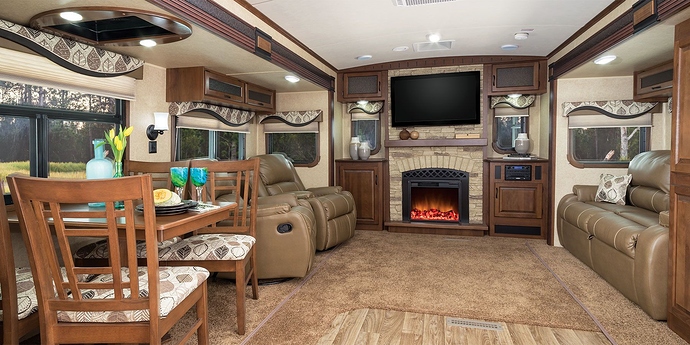 Yep, that’s the only way I am interested in camping…

You guys are hardcore in Canada, eh?.

You guys are hardcore in Canada, eh?.

Actually the giant RV is what I usually see camping in the US! The state park my parents go to even has PAVED driveways on the sites.

Every time I go here in Canada, it’s mostly tents with a few smaller trailers and pop-ups.

Yep. My folks have a big 5th wheel. Not quite like what you posted, but it’s nicer than hotels I’ve stayed in

But does the Roku or tablo require a WAN connection if it’s hardwired.
Many manufactures make pocket/travel routers. Many of these may be full function(DHCP server) with the exception of a DNS server. You would think you could purchase a good 4 port switch for $15, plug the roku/tablo into the switch and plug the switch into the pocket router.

We want to drop Comcast entirely; no phone, no internet, no cable. We will use our T-mobile cell phones for all communications and will periodically use a mobile hotspot to connect devices in the home. We have excellent OTA reception for all major broadcast networks and want a reasonable DVR capability for recording our favorite programs and skipping commercials. Can we: Purchase a Tablo DVR and a Roku device to connect to our TV Install the Tablo and Roku using Comcast internet service Disc…

If I can easily (or even automatically) sync my Tablo recordings onto a Plex server, and easily access the Plex server from multiple Roku sticks, that sounds like the best of both worlds.

I haven’t even started to research that, so I don’t even know where to begin.

Yes, you can. This is the set-up I have at home (but it isn’t moving around like yours will).

I have a small computer (Intel NUC i3) that runs the Plex server on Linux.I have the SurLaTablo.py content ripper (has a thread in these forums) to pull the content from the Tablo (commercials and all) and put it into the Plex media library. The Plex media server is set-up to detect when new files are added and update it’s library.

SurLaTablo.py runs on a scheduled (cron) job early in the morning to get everything that was recorded since the last time it ran.

I use a Roku (old 2 XS in the bedroom, and new Primeiere + in the living room) to play the content from the Plex server.

If I were building a more mobile set-up (like you seam to have), I would look into what media server options there are for the single-board-computers, like the Raspberry Pi. That way there is less power needed for the media server (although less ability to transcode). I would also, probably, connect the media server to the TV and add support for e-mail and web browsing (along with a wireless keyboard).

If I planned a single TV, I would look at connecting the Tablo and media server directly (with a roll-over ethernet cable) and have the media server act as a wifi router for the Tablo. That way I don’t need an AP of my own.

With my experience on my latest trip (my Tablo crashed and I missed more than a week’s worth of recordings), I’m back to leaning towards taking the Tablo with me on our 6-week road trip. I don’t want to risk having it crash again and missing out on potentially a month or more of recordings.

Hi MichaelColey:
We have our 5th wheel permanently parked on a lot which we own so we are not traveling BUT I have basically the same problem you have … Taking our media with us to the ‘cottage’. While my wife likes to read … a lot … I like my movies and TV series … A lot!! Can’t go a weekend/week without my movies, series shows and music.

My solution was to setup my own network in the RV using an inexpensive HooToo Wireless Travel Router. In Canada you can get them from Amazon for $36. It’s a bargain for what it does. 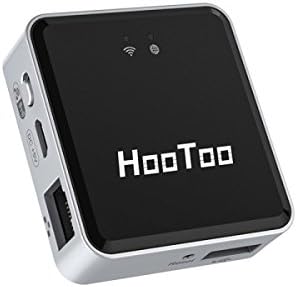 The TripMate is the only mullti-use gadget you need when traveling, and complements your active tech lifestyle.This item can help you creat own hot spot and make you enjoy streaming video/music wirele ...

I haven’t taken out my Tablo yet but I see no reason why you couldn’t connect the Tablo to the local network and view your recorded programs, just like at home.

I connect my laptop and Android Tablets to the network wirelessly and they all see each other, just like your home network.

I invested in an Android app called DroidTV many years ago when the lifetime membership was really inexpensive. I ‘record’ a bunch of different series episodes to my Android tablet then ‘cast’ them to my Roku through the local network described above. Worked like a charm!
http://www.mydroidtv.com/

I also have Playon (on my home computers) which allows me to record just about anything online from sites such as NetFlix, Hulu and your network websites. It also removes commercials. I just copy these recordings to a USB stick so I can play them through my notebook computer or tablet at the ‘cottage’.

Record any streaming video. The only streaming video recorder and media server that lets you stream videos online or offline on your TV, tablet or phone. All-in-one solution for streaming media.

All I can suggest is buying an inexpensive travel router like I did and experiment with it on your next trip (or out in your driveway before you leave). It certainly solved a lot of problems for me.

I hope this helps!!
Dale

Yep, the travel router is definitely part of my plans. I’m probably going to follow the suggestions here and just copy shows from the Tablo to a media server and take that with me.

We’re not ones that have to watch the latest episodes immediately. Even a season later is fine with us (we used to just buy DVDs of our favorite TV shows). We don’t watch TV on a schedule, but we like to have something to watch (and especially something for the kids to watch) when we have some down time.

I’ve already accumulated a really nice library of OTA movies (about 40) and TV shows (thousands of episodes from about 60 TV shows) in the couple months since I bought the Tablo. Taking up about 1 TB out of the 4 TB drive I bought. I think that usage will drop going forward as the episodes fill in. For instance, we have 58 episodes (out of 230) of Big Bang Theory recorded, 136 episodes (out of 221) of The Lone Ranger, etc.

PlayOn.TV sounds neat. I might have to look into that. We watch some things on Netflix and Amazon Prime that we can’t get OTA, and it would be nice to download those when we have good WiFi so we can watch them later when we don’t.

I know some areas we’re planning on going won’t even have a cell signal.