I suppose so, just pressing the envelope a bit maybe for some. Anyway, I am more then happy with what you’ve succeeding in doing for me!

The problem is, if you are running MCEBuddy with multiple concurrent conversions and you have an open slots waiting for titles to finish Ripping (remuxing actually), once you kill the background process, MCEBuddy will fill that open slot with the partially ripped title. You know, I am a power user, might be no one else will even be using multiple concurrent conversions with MCEBuddy, then you idea is a fine one.

I’ll try it. You are right, it is a matter of how fast you can get rid of the partial file in MCEBuddy’s monitored folder. My computer will most likely do the delete fast enough, but there’s also a matter of the OS thinking the file is still in use and won’t delete it right away. I’m at the office, so I might not get a chance to do this until I get home though.

Just had a thought. What if you used a temp area for muxing and as files finish that process, move them to the output folder. Then you can simply delete the files in the temp folder when background processing is stopped. MCEBuddy would never see anything but fully muxed files that way.

@marjamar
You’re so right - that’s the standard solution to a common problem. Wish I’d thought of it first (you beat me to it).

Please pick up the latest (version 1.1.5) and give it a try. And remember to uncheck the MCEBuddy option for “monitor subdirectories” on the “monitor location” screen.

I don’t see that it is doing anything different. Still seeing the files start in the output folder before they are fully muxed. You would need to only have them transfer there after they have been muxed in a temp folder.

That is what I did. It was only like 10 minutes old or something when I downloaded it.

Maybe I messed up? It’s been known to happen. I’m going to bump the version number, build, and re-upload.

Edit: Version 1.1.6 is “there” now. Please pick it up. What you should see is a “tmp” folder created below your output folder, and the .MP4 will be created there, then moved to the output folder upon completion.

Thanks CycleJ for fixing this little issue with my setup. Much appreciated.

It occurs immediately upon trying to launch it. Here is a screen grab of the error plus the installation, which appeared to have run without anything unusual. 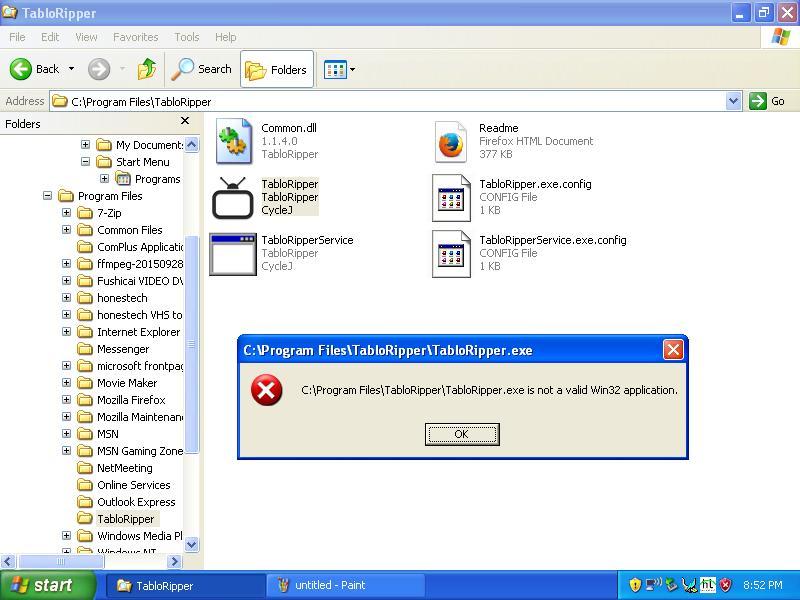 The screen he showed is XP for sure.

@Cutter
The answer appears to be that if you’re running an old copy of XP, and can get .Net 4 installed, you might be able to run the 32-bit version of TabloRipper.

Thanks. I’m working on it now. Will keep you posted.

I’ve installed the .net 4 framework, but had no change. So I tried getting the .net 4.5 one, but it tells me that it isn’t supported on my system (looks like it won’t install on XP. Any other suggestions? FYI, I notice that TabloRipper.exe.config specifies that it has to have 4.5. Am I reading that correctly?

For whatever reason, part of my system defense (Kaspersky Total Security) blocked Tablo last night. Tablo tried to reach my system 4 times using the same IP but 4 different ports. After the 4th attempt, it was blocked fully.

I don’t know if this is a full fix or not, as this is the first time it Kaspersky blocked it. It would be part of Tablo Ripper or it’s calls to other software that caused this I’d expect.

Thanks for getting .net 4 installed on your XP system and giving it a try, but I really can’t support XP going forward. Perhaps you can upgrade to an old version of Windows 7 32-bit?

@marjamar
That’s annoying, and I hope you find a way around it. Since the certificate authorities decided everyone needs to pay for the privilege, I’ve been unable to locate a reasonably priced “individual” option.

I’d hope by manually raising your software’s status to “Trusted”, everything will be fine. Don’t blame you for not wanting the certify Tablo Ripper. It’s a free program and there should be a process to certify free programs for free or just about free.

Well, after deleting all of my Tablo Ripper “Rips” about 3 days ago or so, I am now back up to 1375 recordings that have been successfully ripped, de-commercialed (pretty well), and transferred to my PLEX server! Aside from a few issues with PLEX not always finding or correctly finding need metadata and cover art, PLEX now has my TV content filling my my drives. Once this HD is fully ripped, I have 2 more to do. It will be a bit of trial and error as I’m not sure how well Tablo Ripper will like working with older content that will not match what Tablo thinks it has on the HD. We’ll see how that goes then.