I want to order an OTA DVR for my daughter and the Quad looked good but as an engineer I am concerned about all the HEAT on the HDD or SSD drive. That can’t be good and it poses a potential fire risk. Does anyone know if all of the Tablo tuners/dvr’s run that hot. We were looking for a 4-tuner model rather that the less expensive 2-tuner model. It appears that they may not be making the 4-tuner Tablo OTA DVR anymore as only refurbished ones are available. I wonder if those ran hot also?

I have two of the original 4 tuner models and yes they both run hot. I have both units sitting on a laptop cooling pad and that keeps the units at a comfortable temperature. The units temperature is dependent on the number of tuners in operation. With all 4 tuners in operation, my original unit would get uncomfortably hot and I experienced recording problems. Since adding the cooling pad, I haven’t had any heat related problems. My original unit is now over 4 and one half years old and working as well now as it did when it was new.

Thanks: do you know why the old unit they say 4 tuners and the new Quad they say can record 4 stations. Are there NOT 4-tuners in the Quad?

Actually, safer to say 4 tuners, as there are scenarios where multiple tuners are occupied and not really apparent that they should be.

I was just wondering what the difference was since the newer quad doesn’t say 4-tuners. Wondering if they do something different than the older unit.

Wondering if they do something different than the older unit. 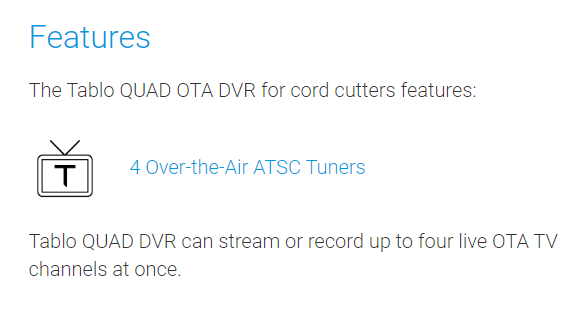 The internal SSD in my Quad got uncomfortably hot even when the unit was idle forever and it made the unit that much hotter. My concern was the effect heat might have on the lifespan of the Quad and the expensive SSD rather potential fire, especially given the internal heat sensor it’s reputed to contain. Again, I find the AC Infinity MULTIFAN S3 pictured in my earlier post, placed below the unit and on the lowest speed, to be a good solution.

I should stay out of this thread. However as to the 4 tuners my Quad came with two heat-sinks glued to the bottom of the board under the tuners to draw heat away. Also one tuner had a sil pad going from the chip to the RF shield top lib. I’ve since added sil pads going to all 4 tuners. Not sure it mattered much. I’m done with debate, however I’m happy to give some technical observations. My quad with no external fans now runs the internal drive barely warm after 24 hours use.

Fella’s thanks for all your feedback. If this were mine I wouldn’t mind some fan’s etc. but it too risky at my daughters house with a toddler around so I’II have to look for another solution/another manufacturer. If anyone has some Idea’s I’m all EARS. <. : ). It doesn’t seem that there are a lot of good choices out there which seems strange given that so many folks want to get away from the overpriced; combusts, charters and probably FIOS also.

Any concerns pretty much go away if you run an external drive. The Quad itself is engineered pretty well with lots of aluminum pulling heat away from the CPU and the board itself. The problem really is that one of these heat-sinks is a metal plate right above the hard drive bay which just soaks the area with heat. Eliminate that heat-sink add a 40mm fan and problem solved. The heat-sink in question appears to be pulling heat from what looks like a Kingston flash memory chip. I didn’t bother to look up the PN. I added a small heat sink with good fin density to that chip Sil pads are used to bound all the heat-sinks to the aluminum.

I’m happy with the device as I have it now. And I never would suspect any risk of fire with the stock design.

So it is just the internal HHD or SSD that gets so hot in the Tablo Quads? IF an external one is used the Tablo itself does not Over-heat?

Corrrect, Technically I’ve never had my Quad ‘overheat’. The Internal HDD or SSD drives temps are what’s up for debate. Run an external and your good to go, the device itself is more then fine at the temps it runs.

Would have loved to see pics of your mod.

I can do that, the way I have the fan wire run at the moment is messy so I hesitate to take photos.

I’ll get some in the next couple days.

There’s no need for an expensive SSD, and it provides no gain over an inexpensive…
https://www.tablotv.com/setup-networking/#harddrive

I have a 1 TB Samsung 850 Pro sitting around collecting dust, I originally was going to use this in the Quad until I discovered what allegator1 did. Not because of speed related issues, more just because it’s sitting around doing nothing. The only other 1TB drive I had in 2.5 inch was a 1 TB Toshiba which is what I’m using now. It was brand new.

Thanks, but only if it’s not too much trouble. Am curious to see how your 40mm fan fits in.

I’m mostly deaf. Send all your hardware to:

Good SSD’s are less prone to failure, cheap ones…not so much. I’ve had hard drives run 15 years and still be fine. Then again I’ve had Seagate drives specifically die in months or less at least on the consumer level, their enterprise stuff fairs better…mostly.