@MarkKindle: I think I could try the CM-3412 with an FM filter. Any FM filter you would recommand?

Being in the US, I order them from AntennasDirect. Radio Shack used to carry them. Any one will do really - they’re all the same.

Looking at your antenna, the VHF portion can be strengthened. It appears to be an open rod. You could double its size by getting something like copper refrigerator coil, cutting it to match the size of the VHF rod, and inserting it at both ends to form a semi-circle. Like this: 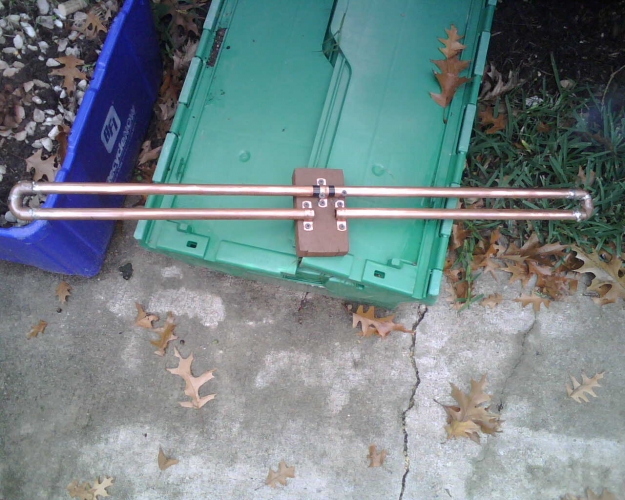 Just out of curiousity do you get any Vermont channels?

For some reason I thought you were in Montreal until I looked at the TVFool report and realized you weren’t getting any Montreal channels. My advice would be to get the CM-3412 and not get the FM filter. See if the signal strength is smooth from just the CM-3412.

TVFool also runs FMFool which would show you if there are any strong FM stations near you.

BTW are you pointed to the 4 stations closest at about 88 degrees? Or are you trying to get those stations also at 190 degrees?

@MarkKindle: The FM stations are probably in the same towers, here is the results from FMFool:

I pointed the antenna noth-west at about 90 degrees. I admit that I didn’t know which one I should use (azimut (true) or magn?

Thanks for your help, I really appreciate!

Try magnetic north (103 degrees). In an attic installation every degree counts. Also different places in an attic may give better results. Try not to point through aluminum ducts. I’ve used my cell phone using its compass app.

You can even try augmenting the VHF rod by adding aluminum foil to it. Sometimes that works to strengthen a VHF receptor… Another trick - put a long rod or pipe (40 to 60 inches long) behind the VHF rod to act as a true VHF reflector (this may add as much as 3 db to it). You can just tape it to the screen behind the director elements directly behind the VHF element.

Thanks, I will try it this evening.

Strange thing is that my VHF channel is the stronger (98-100%) according to my TV Tuner (frequency meter).

Will the foil help for signal strength or quaity?

The foil was to help with signal strength. However if the VHF signal is already at 90-100%, that is strong enough. Something else may be interfering with it. However you say the pixelation is only on the Tablo and not the TV tuner?

If it is OK on the TV tuner, then somehow the Tablo is either losing the signal strength or something is interfering with the signal WHEN it enters just the Tablo. Even if the Tablo splits the signal 4 ways, the initial 100% should be sufficient for a 4 way split.

If the cable goes directly into the Tablo and there is no split, does it still pixelate on the Tablo?

We’ve seen at this forum, when the Tablo isn’t sufficiently ventilated, as it grows hotter and hotter, it screws up the incoming signal. How hot is your Tablo?

I’ve seen pixelation from the TV Tuner too, but it is worst on the Tablo. That’s why I thought that maybe the splitter was part of the problem. But I know for sure that there is some kind of interference, I will check again the antenna position first.

The cable is directly into the Tablo. I tried putting the Tablo on blocks to help the ventilation, but no effect. Maybe I should try stopping the Tablo for a while and boot it again and see what happens.

Are there any metal structures such as pipes or air ducts or a furnace in the attic near the antenna that could reflect a signal and cause multipath?

Degradation of ATSC signal in summer is normal/expected.
Humidity in the air as well as live/wet leaves on the trees are contributors.

Amplifying is unlikely to help, especially at 8 miles from towers.

I’d say “just wait until late fall and the signal will be fine” but obviously that is not really a solution. You could try pointing the antenna horizontally a couple of degrees away from the troublesome transmitter. This will reduce multipath interference as well as overall signal strength - you may find a “sweet spot” . Additionally try pointing the antenna slightly upwards by a couple degrees - (same idea, try to find a sweet-spot).

I’ve tried all the above antenna pointing stuff in summer, as well as preamplification. Nothing solves the problem reliably for me, but I am about 50 miles from the troublesome xmitters. So my “solution” to this same problem since 2001 has been to subscribe to comcast TV service, without renting any equipment from them (they provide a cablecard for free).

Luckily I have a newer Sony that can display signal strength, signal-to-noise ratio, and errors.

I just moved my antenna a few degrees to get one channel’s hi-vhf signal-to-noise ration from 17db to 20db. Thus reducing the uncorrected error rate to almost zero. Of course this can affect the other channels.

ok guys, I am confused…

Now the cable is connected to a splitter and then in the TV and Tablo.

Watching the same VHF channel… TV is fine, Tablo has pixelation. Same thing on iPad, iPhone and Roku. But TV from antenna is fibe.

What should I do?

Could be the VHF antenna is strong enough without amplification for the TV - usually a TV tuner is better than a DVR tuner. Maybe try adding the CM distribution amp before the internal 4 way Tablo split (with a 30 day return policy for the CM-3412). Or strengthen the VHF antenna receptor as I mentioned before.

At 8 miles out, an old fashioned rabbit ears VHF antenna for $10 would be sufficient. You can even try that separately from your UHF antenna.

swap the cables leading to both halves of the split signal. the one leading to tablo could be nonoptimal.
also how long are these cable runs? (especially if it’s a longer run, and if it’s RG59/58, then consider swapping to RG6?)

if removing the splitter and going straight-thru to the tablo results in any improvement that is consistent with addition of preamp maybe being helpful. or the particular/original splitter being faulty. or both.

another alternative, wait until winter dry air and leaves-fall and the problems may disappear.

at 8 miles there ought not be any signal strength issues. I can belch further than that. take my word for it or surf to belchweb.org and PM me the angle.

I just received my CM-3412. I installed it and my problems seem away! But I had to change my antenna position. Before the amp, I was pointing 103 degress NW and had all green dots for my 4 channels.

After installing the amp, I only had 2 channels, 8.1 and 13.1. The others went away. I suspected some kind of tuner overdrive, so I put the antenna 15 degrees and all green dots were back.

At this time, I didn’t see any pixelation. Crossing fingers that my problems are finally gone!

Thank you all for the help and tips!

What this proves is that the Tablo tuner (not the TV tuner), after its internal split, could not deliver a solid VHF signal on that one channel. The overdriven UHF channels did not need the amp but 8.1 did BUT only for the Tablo.

The question then is - what use is the Tablo’s internal amplifier? It doesn’t seem to deliver good results in doing the split. If I were Nuvvyo I would take a look at how effective its internal amp really is…

Maybe the problem is that the amp needs to be directly close to the antenna and not in the Tablo?

No, your problem is that only the VHF channel needed amplification. That VHF rod on your antenna is not that good. The UHF channels are being overdriven by the amp but not the VHF one.

One solution would have been to have a better VHF antenna separate from the UHF one. I rarely recommend combined antennas. It is known that a VHF component on a UHF antenna will cause the UHF portion to lose signal strength. Better to have two separate antennas (UHF and VHF) and join them via a UHF-VHF combiner.

Where your distribution amp is OK. By moving the antenna several degrees away from magnetic north you lessened the strength of the UHF portion thus lessening the overdrive. In any case you have a solution for the time being but it does point out some problems with the Tablo internal amp (on every Tablo box not just yours). The Tablo’s internal amp when coupled with its internal splitter is just not that good. Many people have noticed that and were also forced to buy an amp to compensate for Tablo’s inefficient signal split inside.