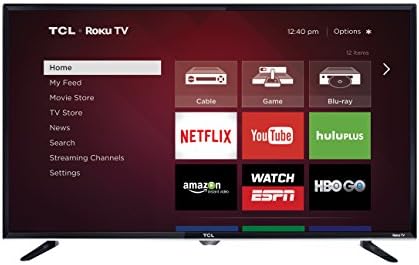 TCL, one of the world's best-selling TV brands, and Roku, America's most popular streaming service have come together to bring the latest in technology and design. We've simplified the smart TV so you ...

I bought the 32 inch on Black Friday from Amazon for $125. It was originally $225 when I added it to my wishlist. The price then dropped to $179. I missed that opportunity because within a week it went up to $299. Then on Black Friday it dropped to $125 and made the purchase. I loved it so much I bought the 48 inch version a couple of weeks later for $369. Amazon now sells it for $383

In my opinion $169 is a good price for the 32 inch and the Roku Tablo app works great on the TV.

Bought this for my daughter’s bedroom. Great little TV. Love that Roku is integrated.

We have one of these in our kitchen and love it. You can not say enough about only having 1 remote!! I forget what we got ours for… It was on Woot.com for somewhere between 125-150 I think.

I will note that the Roku hardware is somewhere around the old roku 2 range. So its not the fastest thing, but for what we use it for it is great.

Later this spring TCL will be releasing the first 4K Roku TVs.

The first 4K Roku TV is coming, courtesy of TCL

Roku TVs, which build our favorite smart TV suite right into the television itself, are finally 4K, starting with a series from Chinese brand TCL, launching this spring.