One of my favorite TV shows is Sherlock, staring Benedict Cumberbatch and Martin Freeman. A new episode is finally being released on New Year’s day, but it took some investigating to find it. You won’t see it by searching for “Sherlock”.

It is located under “Masterpiece Mystery”, episode 29, on your local PBS station. The episode title is “Sherlock: The Abominable Bride”, so I do wish the Tablo would search by episode titles as well as show titles.

I hope this helps other Sherlock fans.

Thanks for the heads up! I hadn’t been able to find it. It’s one of our favorites, too.

This is the problem with the anthology series like Masterpiece Classic and Masterpiece Mystery. I have both set to record all new episodes, even though I only watch certain shows. The same problem exists for Downton Abbey, the new season of which debuts January 3rd under Masterpiece Classic.

Ooh, Downton Abbey, you just made me a hero to the wife! Now when she asks, I can say ‘already done’ and score big points…

This is the problem with the anthology series like Masterpiece Classic and Masterpiece Mystery.

The same problem exists in Roku Search for PBS episodes. Sometimes one has to search for “Masterpiece” and then find out what content is playing under “Masterpiece.”

Pbs also has a channel available where you can watch episodes of all their shows after they air. I know its available on Android TV, I assume it is on Roku as well. 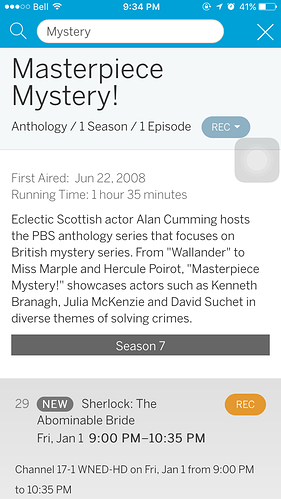 Some time ago (12+ months) when I was researching OTA DVR options, I came across someone complaining bitterly about this on some forum (not this one, but sorry, don’t remember which). Ultimately, it is because PBS wants to brand everything under Masterpiece Theatre, Mystery!, etc…