POLL: What Type of Antenna Do You Use with Tablo? 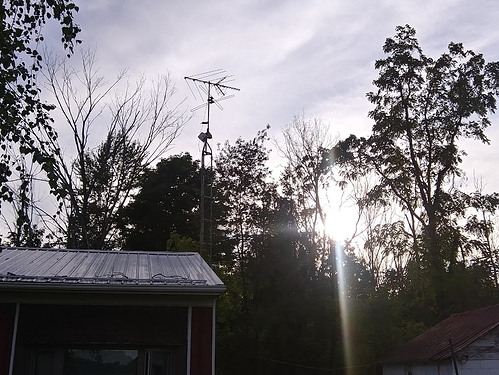 These antennas, I guess, were before the era of leaf interference. Though a small plane flying by may cause a moment of interference. It doesn’t have a name. It’s survived brutal storms for about 25 years (unclear how longs it’s been there, it wasn’t a memorable event)

The antenna on top is a traditional Yagi - I have the same or very similar in my attic and connected to my Tablo. It provides about the same performance as my ClearStream 4V, both are very good but not perfect. I’m still considering getting an Antop but that would mean a nasty trip up in the attic

.
I’m not sure what those elements are below the Yagi.

remnants of an FM antenna. The connections gave way some time ago. Below that, an original Radio Shack pre-amp. Didn’t last long, since I was still capable of getting up there to by-pass it. At the top of the tower (in front of the rotor) is the radio device for my wireless internet, this one uses LTE technology.

Prior to this, I put up 2 real big antennas… I guess I didn’t know what I was doing since they didn’t survive. Young 'N dumb, thought bigger was better, till a storm passed though. (initially I had a steel tripod tower, rusted out at the concrete base) 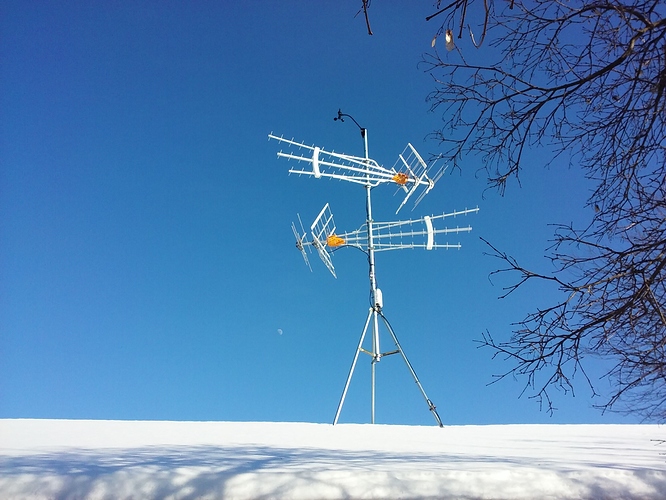 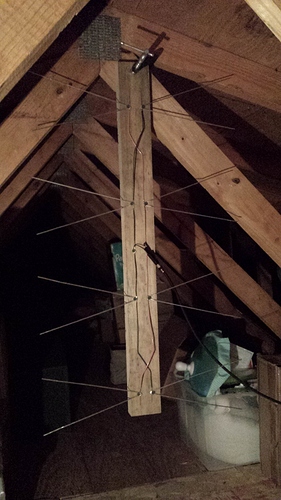 I have a directional yagi type that can pick up both VHF & UHF. When I was searching for antennas, I had to get one that could pull in both types of frequencies. At the time, it was really hard to find ones with a small footprint (ie Antop) that could pull in both UHF & VHF well. I tried an Antop antenna once, but the amplifier and circuitry failed on me. So, I bought an RCA directional yagi antenna.

I am lucky enough to live in an area where most of the channels I wanted are in one particular area (Northwest). There was one PBS station to the northeast and one CW to the south, both of which are retransmitted (under different call letters of course) in the northwest location. As an unexpected benefit, I can receive additional channels that are a good 80-90 miles north. That’s where I can get my Stadium and Heroes & Icons channels. WooHoo!!!

Antop set up in third floor window. Can pick up channels from 60 miles away. Haven’t had to fuss with adjusting the antenna in months. I was very skeptical at first but it’s been a good investment for sure.

Would be better on the roof but wife made it clear that I’m not getting 50 feet up on the roof.

I responded “Indoor…” But it’s actually an Indoor/Outdoor antenna in the attic (Indoors?)? Should that have been “Other”?

Marathon Indoor/Outdoor Antenna similar in appearance to the Antop AT-400B? Have actually considered picking up an Antop and doing an A/B comparison scanning with each in the attic 5 times and seeing if they perform any different from each other?

Pure curiosity, maybe when I have some spare cash?

People have found that using a Winegard LNA-200 instead of the native Smartpass amp supplied by Antop enhances the AT-400B’s performance.

If I were to buy an Antop, it would be the AT400 (not AT-400B) which comes without a preamp. Then I would supply my own preamp.

I responded “Indoor…” But it’s actually an Indoor/Outdoor antenna in the attic (Indoors?)? Should that have been “Other”?

The question is, what TYPE of antenna do you have. Not where it’s installed.

The answer can be Other.

Some companies that sell antennas have antennas classified as attic. Others as indoor/outdoor versus outdoor.

I have a mid-range RCA Yagi antenna mounted in my attic. Fits in a small space and provides good directional reception up to around 35 miles. The side lobes pick up some stations I wouldn’t normally get. Too bad attic mounted outdoor antennas weren’t one of the options to choose. Works great with the Tablo. Whole house coverage via wi-fi with only one drop to the Tablo.

So… how’d you make out reception-wise? My reception went to near perfect when I stopped fooling with indoor (even attic) and went to roof-mount. Went from 30 channels to 48, and the ones that used to be iffy are now solid. “Why Indoor Antennas Do Not Work Well” https://www.youtube.com/watch?v=pXLHJ9vlctc 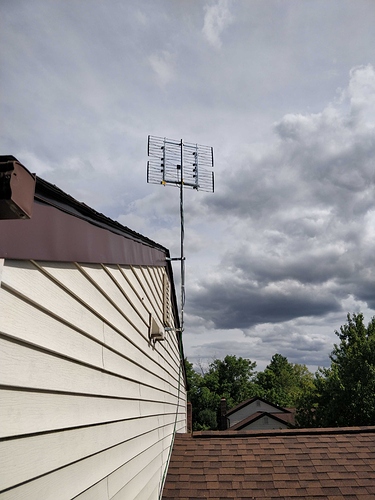 Did you do that yourself or have a professional install it? That seems like what I need as upgrade from my indoor Mohu.

And what model is that?

I did it myself. It is well grounded with #6 gauge copper ground wire, and there is a lightning arrestor on the coax right before it enters the house.
It’s a Channel Master Extreme80 CM-4228HD. I used two 5’ mast sections. Unfortunately those were out of stock at Channel Master, but I ordered the exact same items from Winegard via Home Depot. I used 8" standoff brackets which I got online from Solid Signal [https://www.solidsignal.com]. 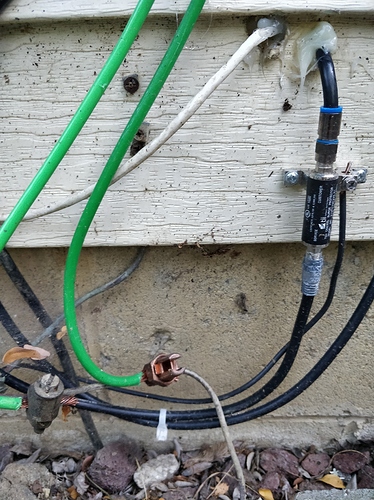 One more thing. This antenna has a directional reception field of 180° which works for me because all of my stations are NE, E or SE from my house. Use [ https://antennaweb.org/ ] or similar to determine where your towers are in relation to you.

I have two large Radio Shack antennas in the attic. These are the ones that are 6-7 ft long and 4-5 ft wide and most everything folds out after you get them up there. They are about 45 yrs old and cost about $20 dollars and I think they were advertised at 75 miles. I am only about 8 miles from the antenna farm that sets about 1500 ft higher than my house. I get 80+ channels and all are strong. One antenna feeds the living rm tv and Tablo, and the other the bedroom and man cave tvs. All this was installed about 45 yrs ago before cable and sat TV was available - Seems to be the perfect setup for me and Tablo!

I’m using an antique (30+ years) VHF/UHF/FM antenna mounted in my attic. Maybe a Radio Shack brand. It’s about 5ft long with the widest element about 6ft.
This works well for me in the DFW area as channel 8 (ABC) is broadcasting in the VHF-HI band (180-186 MHz).
My mother-in-law has one of the flat UHF only antennas mounted in the window of her apartment. She can’t receive channel 8 at all with this antenna. But she’s OK with that. “There’s nothing I want to watch on that channel” 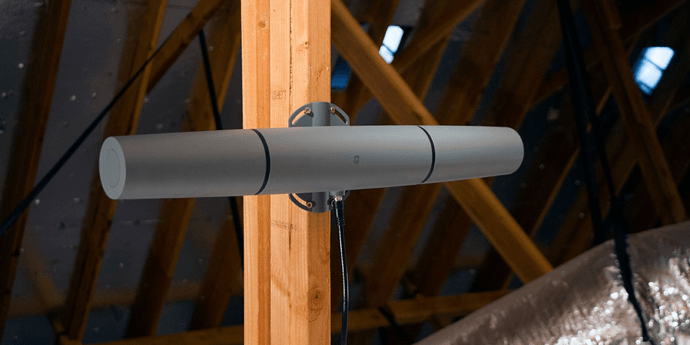