POLL: Most Recent on Roku - How do you want it to work?

If you’re not one of our beta testers, you may not know that one of the most popular feature requests for Roku - recent recordings - is coming soon. 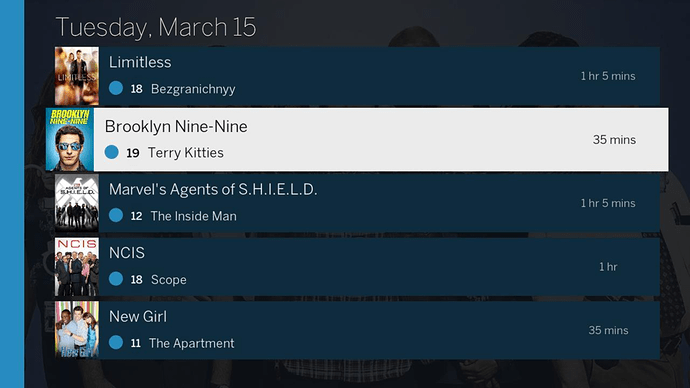 Before we roll it out to everyone, there’s a bit of a debate internally on just what recordings should be shown in this screen.

Check out the poll below, and vote for how you think this screen should work.

I think the ‘Most Recent’ recordings screen in Roku should show:

Make sure to put your 2 cents in ASAP!

Maybe “unwatched” could be a separate filter option.

Here’s why I want ALL in the list:
If I am done with it, I’ll delete it. If I might want to watch it again, I’ll keep it. If you filter it, then it’s harder to find and watch again. If I partially watch it, now you have a dilemma. Just show all recent and keep it simple.

I am also a fan of preferences, so if you can give us a choice, that’s even better.

I am also a fan of preferences, so if you can give us a choice, that’s even better.

If both choices were an option, we’d certainly try to do that, unfortunately we have to choose. Thus the poll!

If you want a suggestion. Look at how Plex does it. It’s pretty good.

Me personally, if I am looking specifically for “most recent” recordings, I am trying to find what is new. If I’ve watched it, it is not new.

Of course, devil’s advocate, if one of my kids watched it, then it would still be new to me. That doesn’t happen in my house, though. And if I’ve watched it, I have also deleted it. So it wouldn’t be there to start with. Hmm. I may have to change my answer.

I prefer ALL. Since multiple family members are using the device, they should see all recent recordings - even those someone else may have watched already. I think it’d prevent a lot of “why didn’t my show record!!” complaints.

The screen shot above shows the blue circle indicating ‘unwatched’. If that’s accurate (and would be a half-circle for partially watched or no circle for watched as it is when looking at episode listings within a series), then showing ALL recordings would still be pretty easy to scan for unwatched content. The downside (I always suspect there’s a downside) is - is the number of shows listed in recent limited to a fixed number (e.g. it only shows a maximum of 10 shows from today, even if there have been 15 recorded)? If the listing is limited, that might tip me over to wanting it to only be UNWATCHED.
Hmmm… waiting a few minutes before I vote to see if @TabloTV has a clarification.

is the number of shows listed in recent limited to a fixed number?

The list is NOT limited by a number of recordings per day.

Show all. Use the blue circle indicator to show if it’s been watched or not

I love that idea!
Wait, it already works that way.
Doh!

@TabloTV - why not create both views? “Most Recent” and “Most Recent Unwatched” - then each person can use the option that works best for them.

But, your screen shot causes me concern. I hope I just don’t understand the context, and perhaps this is a special screen…

Most excellent! Then show all is my vote

The horizontal bar per “recordings” and not episodes is rather lame in the context of the WEB or Roku app. Of course the more they diddle around with the app the more users should compare the useability of tablo UI versus the Tivo UI.

I hate the tiles with all episodes view. Hate it. Seventeen hundred clicks later you get to watch your latest episodes, that is a terrible UI design.

I would wager that if you had a 3rd option in the poll that read “default to option 1, with the option to switch to option 2 in the settings menu”, you would see most go with option 3.

I voted for displaying the actual Most Recent, watched or not.
For me, I somtimes watch a show that is recorded on Hulu, or on TiVo…so my ‘watched’ status in Tablo isn’t necessarily accurate (I realize this is probably a fringe case). And there is already the option to drill down to all episodes from the Most Recent, if I want to see any prior episodes.

If you want a fine example of what how your player should ultimately filter and sort recordings, look at the players from Plex. They are miles ahead of any of the Tablo players.

@luker I agree the UI could be improved. Way to many clicks to get to a show… But the tiles look nice, and give you a chance to see more shows on one screen.

So, for me, the issue is with the UI design, not the tiles…

I DO prefers to have all shows under one title as a folder, though.

In a perfect world (for me), I would click the tile of a show I want to see. And then it would immediately go to the oldest show I haven’t watched as the next screen. And then I would click one more time to have it play…

And the seasons would be folders, not lists…

So, let’s say I had 3 seasons of recordings… I click the tile, and it would show 3 bars… One for each folder…