Not able to initiate recordings via Roku App

Do you have a subscription, mate? If so, just hit the OK button when you are on the show to select it and then you can record whatever you want. If you want to record the all or new choices, hit the star button on the remote.

JohnLuther, Thank You for the response. It’s funny that you mention the subscription, because I just filed a separate post around the fact that the latest firmware release has begun to make it harder to record without a subscription. I do not have a subscription. And I would never have known I needed a subscription to use the most basic feature of a system I paid for including the tablo unit and a separate drive that is marketed for recording OTA media. Sadly, it appears that Tablo is making it more difficult to use the hardware by crippling the recording feature. As a contrast on the Roku app, I don’t need a subscription to play back recordings, I also don’t need a subscription to view my scheduled recordings. BUT, I just can’t initiate recordings. I’m sure that isn’t an accidental ommision. If Tablo said in their marketing: Here is the deal: You buy the all the hardware necessary to perform recordings and you pay us an additional fee to be able to consistently use the record feature, I could at least make an informed decision on purchasing. And I might say, yes, I should definitely pay several hundreds of dollars for the combined hardware and a recurring fee to completely use the record feature across all systems.

If you go to their purchase page, nowhere on that page does it say: Requires additional service fee to use record feature on all platforms. (https://www.tablotv.com/store/)

BTW, I just decided to go through all of the current version of the website, which is different then when I purchased my tablo equipment. Buried a few levels deep is a reference to subscriptions, and even then there is only a few words in a large paragraph for using record on other devices. It’s not even in the feature checklist. And nowhere is the subscription link provided on the primary call to action buy button for the site. Of course the desire is to lock you in to a hardware purchase and then kindly direct you to a recurring fee base.

Why not do what every site in the world does. Provide a single pricing page that shows product/hardware purchase plus recurring fee?

Lol when you click on “Products and Apps” it is very clear the Tablo has a subscription. It is literally the 2nd thing listed in the same size front as the physical units - I would hardly call that “buried”. 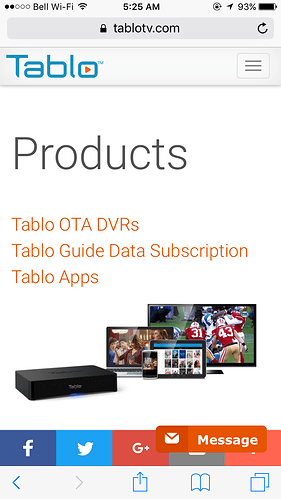 I actually don’t think they have left it off the Roku on purpose… Building a channel for the Roku is not easy as it has its own programming language. It took quite a while for the Roku channel to have half of the web features, I’m sure its on the roadmap just not high priority as I would guess most do the subscription.

For me, I just did the lifetime anyway, I HATE monthly subscriptions, I knew I would have this long enough to pay for it, especially since I have two Tablos on the one lifetime subscription and the $150 lifetime is less than I was paying for ONE MONTH of Dish Network…

A lifetime sentence, hunh…got you all locked up…

Plus buying multiple Tablos under ONE subscription is very cost effective.