NEWS: If Your Wi-Fi Is Terrible, Check Your Router

We don’t often share news stories on the forum but we’re making an exception for this because it’s such a great piece. 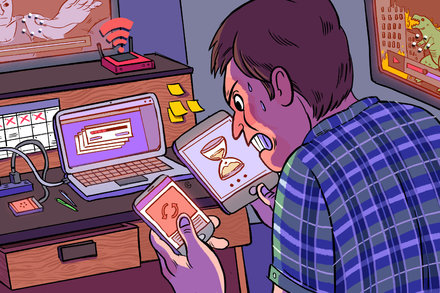 If Your Wi-Fi Is Terrible, Check Your Router

Many frustrating speed bottlenecks at home can be traced to that dusty old box in your basement.

If you’re not router savvy, this is a great overview the technology and terms you need to know as well as offers a suggestion for a good quality WiFi router at an affordable price.

Several Tablo fans on Facebook chimed in to say that they love this router (the TP-Link Archer C7) and that it really helped improve their cordcutting experience.

Long story short, if you don’t know anything about routers, you should check this article out.

I bought the Archer C7 as well a few months ago, and it is by far the best router I have ever owned. Buffering on Tablo decreased, and I havent had to reboot it , compared to my old router I had to reboot at least weekly. My speeds increased to about 2x what they were before. Best part is - I got to throw away (edit:sell) my old Powerline adapters because they were actually SLOWER than my new WiFi connections. Highly recommended.

You just threw them away? I’m sure some of us could find good use for additional power line adapters

I also bought the archer c7 a couple of months ago and have had no issues so far. I haven’t had to restart it yet, other than changing settings and setting up reservations. Like @getcashmoney I was having to restart my old router at least weekly. I’d highly recommend this router for a network including a tablo. I found it on Amazon for $79.99

Let’s not forget what is in front of the router. You do NOT need to be renting your cable modem

After researching nearly 100 cable modems over the past four years, here's what we recommend instead of paying rental fees to your Internet Service Provider.

I have the little brother to the C7, it is the TL-WDR3600 and it works great with the Tablo for streaming via the 5 GHz band.

I’m sending the piece of junk back to Amazon and going to try another companies adding AC to your router. You DO NOT want a TEW-820AP. The directions included in the box said just run the setup wizard. The only thing is it needs to be elevated, and no way to right mouse click on it to run as administrator. So I called the helpless support. It sounds like China in the background. He was getting it set up, but never answered why they could not write better directions. I could not figure out how to change SSID, or DHCP reservations. They call the piece of JUNK an EZ upgrade, but it is anything but. I ordered the replacement and if it does not work, I’ll just get a new router.

Ok, So if im reading this right this TP-link Archer AC1750 is the best router for Tablo. I’m on my 3rd router combo different brands all. 4th technically cause i had comcasts one for an 1hr that didn’t work at all.
I like the combos and they make a combo version cable/ wifi router should i try It?
My best so for has been a Netgear N600 WN2500RP wired to my Tablo and Fire TV works fine maybe a little slower then id like but the wireless is terrible it can’t give me full speed in the next room with a line of site to the computer.
HELP Please im getting really feed up.

I got the TP-link Archer AC1750. Everything is connected using WIRELESS on 5 GHz (only Roku 4 supports AC, but other devices support 5 GHz, including Tablo. Everything just works. I have stopped trying to fast forward thru commercials because it takes so long to resume playing.

What hype. I don’t own a TP-link archer 1750 and have no problem throwing anything tablo can output over 5g to a roku 3 4200. There is any number of wifi analyze tools that will measure wifi throughput.

You would probably be surprised that when used on various devices the chip in one device may max out at 50 and another 80. And that’s if you are holding the device next to the router.

Other routers are good too, such as Links and Netgear. Some models are cheaper and sone have more bandwidth. If you arent having problems then you have a good router.

I still have issues getting the TP-LINK RE200 AC750 Repeater set up ( I think I am going to have to resort to a cable instead of WiFi to set it up ), but it appears that I might not need it anymore. The C3200 works great ! I had been getting “drop-outs” with the old 3600 where I had to reboot it.

Here’s the incredible part : When I got to work today, my tablet ( which was at work all night ) is still paired up !!!
Yes, I did set up DHCP Address Reservation. The Tablet is an Amazon Fire HDX 7". This was using both the “Silk” browser, and the Tablo app.

Those repeaters are great. I recently got about 4 of the RE210 model for my house as well as my fathers, and they have eliminated any dead spots we had, and increased streaming reliability. Did you try plugging it into a wall right next to your router and using the WPS pairing? That is what worked for me.

Nah, It’s on top of the Entertainment Center with a extension cord. I just unplugged it and re-plugged it back in and tried to go through the setup that way. I “kinda” got in, but lost connection at some point. Over the weekend, I’ll play around with it, but last night, I just didn’t want to climb up on something to get it. That “something” should be something robust, but it’s usually a chair or stool or something. If the kids were still little, I would just pick them up and get them to scrounge around up there to get it down.

So, I did the WPS pairing procedure. It does indeed work great and easy. It defaults to calling itself the same name as my main WiFi Router. The other, manual method added an “_EXT” to the end of the name(s). The RE200 does not have a way to reserve DHCP addresses, so I have to reboot in a different manner :

In the past, the Tablo was connected to the Main Router, and was located close enough for a good connection. The “_EXT” signals were only used by my portable devices for when I was in a far corner of the house.

Using this new method, it seems reasonable to expect that the Tablo will first connect to the “Main” router. When the Extender is booted, the Tablo will switch over to it, since the RE200’s signal should be stronger. This seems to be working OK now, and my DHCP addressing is preserved.

Does anybody see a flaw or that I’m overlooking something ???