The 2.2.22 firmware is now available for everyone!

If you don’t see an in-app notification, quickly press and release the reset button on the back of your Tablo and head over to the web app at my.tablotv.com to process the update.

Even though we’re still waiting on Roku to release the update to the Tablo channel, you can still use Surround Sound on all current Roku devices.

If you’re having trouble with your Roku after updating to 2.2.22 and turning on Surround Sound, one of two things is happening:

2 - Your Roku’s sound passthrough settings are not correct.

Get tips on correct setup on the Roku here: https://roku.zendesk.com/hc/en-ca/articles/208754498-How-to-set-up-your-Roku-streaming-player-for-surround-sound

Setting my Roku to Dolby D instead of auto (which was stereo) fixed my playback issue. Thanks!

Just wanted to let Tablo know the stuttering workaround is not working.

I have tried the Tablo app, the Tablo Preview App - still stutters. The stuttering is not as frequent as it used to be, but still freezes every 15-20 seconds for a second (gives the buffering symbol).

I am surprised at how long Tablo is taking to get this problem fixed. I know Tablo will say it is Amazon’s fault, but given basically all other streaming services/devices are working just fine, there is obviously something that Tablo could do to take care of this. The stuttering issue on newer FireTV devices has been going on since the end of last year - it is almost like Tablo wants you to go to another OTA device like HDHomeRun. The new Fire TV devices will continue to become more common and Tablo can’t get their product to work with it. Very frustrating.

I have tried the Tablo app, the Tablo Preview App - still stutters. The stuttering is not as frequent as it used to be, but still freezes every 15-20 seconds for a second (gives the buffering symbol).

In this case, it sounds like TRUE buffering vs. the stutter that we were seeing.

Can you try reducing the Live TV quality in your Tablo’s settings momentarily and see if there’s an improvement? If so, then there must be a bottleneck in your home network.

If not, try one more thing… Disconnect your hard drive from the Tablo and then try to play a Live TV stream. If there’s no buffering it could be an issue with your drive.

It would be sweet to have the ability to convert a recording from surround sound audio to stereo, after the recording has already completed.

Seems like that would be a do-able thing especially since it wouldn’t be a global thing, but a user-initiated activity. It would basically be doing what it did before 5.1 support was introduced wouldn’t it, just on demand re-processing a show that way.

It would be sweet to have the ability to convert a recording from surround sound audio to stereo, after the recording has already completed.

There are a lot of ways we could/would like to make this feature more flexible and user-friendly moving forward.

If you have suggestions, we’ll be doing another user survey next month so start noodling on ways you’d like to see Tablo get more awesome and make sure to share them with us then.

Since I’ve installed 2.2.22 my 2-tuner has seen an increase in the number of recordings that don’t generate thumbnails.

With football season upon us and overtime plays always a possibility the extension of live recordings needs to be revisited.

It appears checking the “Extend live recordings” box does not add 50% more time to the schedule as it did on the past. While watching a football game recording the fourth quarter barely ended before the recording ran out. Glad it did not go into overtime.

It would help if the Tablo menu could set a reminder flag for live performances to suggest a manual time extension to cover any overtime periods.

I am an old dog and don’t like to learn new tricks but I am going to have to force myself to remember to add an ending buffer to any scheduled sports events. 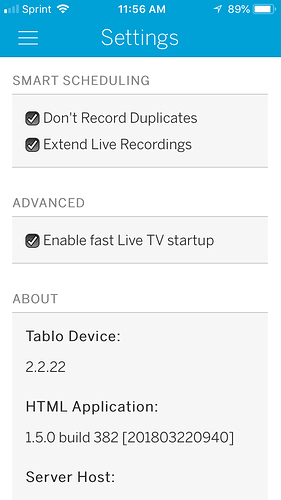 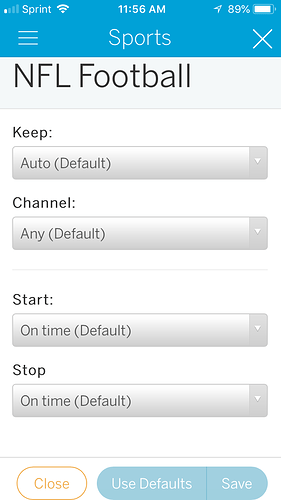 It would help if the Tablo menu could set a reminder flag for live performances to suggest a manual time extension to cover any overtime periods.

I don’t see how it could do that if it doesn’t know the event is actually live.
I suspect the football game you watched was mistakingly flagged as not live in the guide data, which is what the Tablo relies on to determine whether or not to extend recordings past their scheduled ending points, unless it checks for key words, like ‘football’, ‘baseball’, ‘sports’, …

They didn’t mention if any additional time was added. And since we are talking about football any regression would most like have been introduced in 2.2.20. That is when all the extra extend options were introduced.

While I normally have seen Live shows have extended time I think I have seen a regression in default options in release 2.2.20 and 2.2.22.

Here is an example:

I’m not sure that’s how tuner allocation functioned before 2.2.20.

It appears checking the “Extend live recordings” box does not add 50% more time to the schedule as it did on the past.

It still indeed does if marked LIVE and you haven’t chosen a different start/stop time which will override the extension.

Did you set the recording via the web or mobile?

Here is an example:

Extended time WILL be pre-empted by other recordings. If you want to be sure you get extra time, you can change the ‘stop’ time.

Mea Culpa. I overlooked the possibility other programs might be scheduled for recording towards the end of the scheduled ball game which took precidence over the live schedule extension. When I reviewed recent recording times I confirmed that to be true.

I need to now remember to manually add extra time to ballgame schedules and then check the conflicts tab to see what other programs might be affected by the extension.

It would be handy if the Tablo could indicate it projected to add the extra time automatically to the live recordings. Then all I would need to do would be to check the conflicts tab to see if it would be necessary to remove other scheduled programs to allow the live extension to proceed.

I guess bottom line I have been overly aggressive in scheduling recordings since I am blessed with a four-tuner Tablo and an 8 Tb usb drive and a boatload of local TV channels.

Maybe what tablo needs is to be a little smarter when assigning tuners.

If you have two(or more) back-to-back scheduled recordings on the same channel does it really make any sense that tablo would assign 2 tuners for the 30-60 seconds of slot time it’s software added to the end of a scheduled recording.

It’s not like tablo builds a 6-tuner model just to compensate for the slop time.

Remember I started a few days ago with a factory reset of my unit. Now after purging old sync data I cannot get a sync to complete with either the IPhone app or the web app. The progress bar goes to about 20% complete then stops, and the thumbnails keep moving on until the process stops with an error message.

I will try resetting the Tablo in a few minutes and see if that helps. Otherwise I may have to ask Tech Support to have a look at the unit.

Roku app seems to be OK so far. 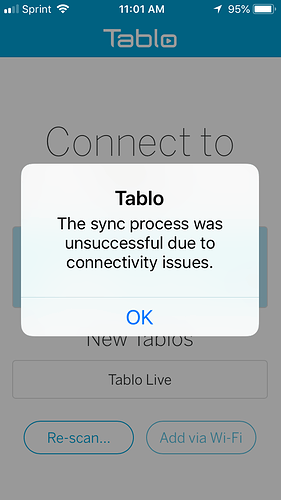 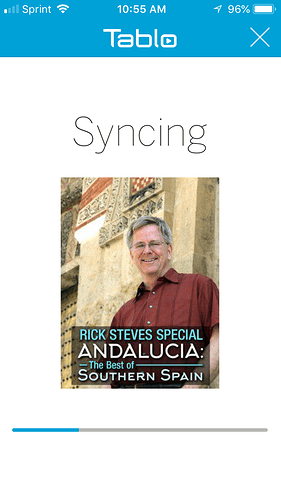 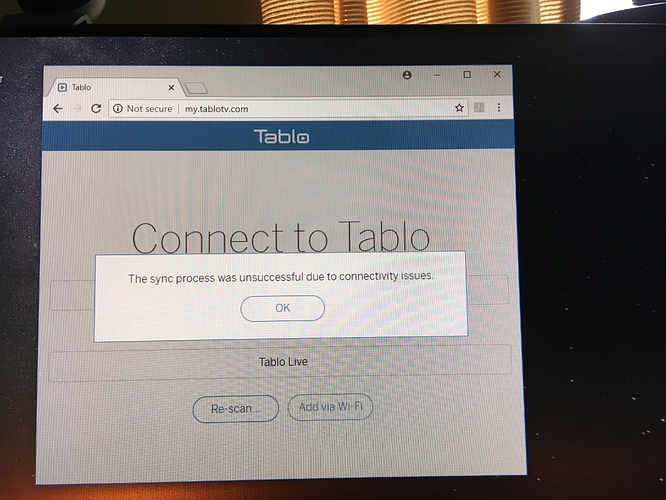 OK, soft reset and full power reset did not help. I will see if the nightly database cleanup helps. If not I’ll check with Tablo Tech Support and see if they want to look at my unit. If not I guess I’ll go with another factory reset and try not to schedule so many programs.

Meanwhile both the Roku and the Windows app that do not require a “sync” seem to be working OK for the moment.

It does seem like over the years when problems did arise it seemed it was mostly for those apps that require a “sync”.