Yeah, I’m going to pass on that. If it were only one device, I might see that being worth a try, but since both are doing it I have zero confidence it will do anything other than make it impossible to ever install the non-preview app again. I do hope the Tablo team reaches out to Amazon and digs a bit deeper to find the issue.

I would rather take a hammer to the device.

Of course I do find it interesting that my amazon account for the fire tv stick has 3 tablo apps: tablo, tablo preview, and tablo for amazon fire tv. 3 different ASIN numbers

will ‘unstick’ the app’s ability to get to your Fire TV devices.

It should be available sometime before Sunday afternoon (ET) so keep your eyes peeled.


If you’re on Android TV, there will also be an update but mostly so we can stick to the same version #s.

I’ll wait for jaye to declare victory. I normally don’t use fire tv stick for tablo. The fire tv stick app is mostly a backup just in case the Roku app starts to eat dirt.

But I usually do keep the app up to date and jaye’s post reminded me to check the device to see if it had been updated to the new version.

Thus I hopped into the cesspit.

The update should be available now.

Here is the good news.

I woke this morning.

I thought I would look to see if 2.1.6 was delivered over night. Yes it had been.

I have 2 OG 2-turner turned on. When I launched the app I didn’t get the 2 turner choice with the search message below. It just loaded into the lowest tablo with the launched menu “settings”

Using the fire tv stick uninstalled the 2.1.6 app. went to amazon account had 2.1.6 (re-)delivered. Went to the fire tv stick had it install and open the app. I got the 2 tablo’s icons with the search message. When I select a tablo it launches into the settings page with the spinning wheel of death.

But I can move up the main menu to the other menus and they appear to work.

Oops spinning wheel of death has been going on so long the fire tv stick screen saver engaged.

Pretty much the same results as Zippy. I noticed there was an update, so I installed it. That alone took an unusually long time, but whatever. I attempted to verify it was 2.1.6 by going into the settings and it just spun forever.

But going to the Settings “tab” to verify it is 2.1.6, and you know, the usual stuff needed to update the guide or rescan, etc. and was again met with a spinning circle. I let it sit for at least 15 minutes, it is never coming back.

Tablo might want to consider rolling back this change, because if a new customer gets this they won’t be able to set up their DVR at all. 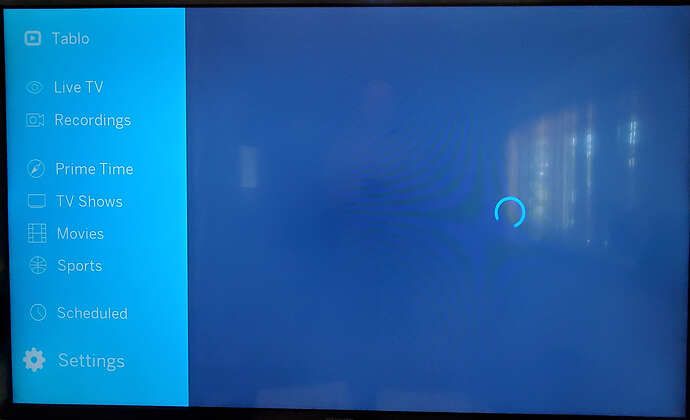 Many of the newer users have never experienced the spinning wheel of death.

Of course if you have multiple tablo’s units and since the disconnect button moved to the settings page, it might be helpful to fix it.

Using the fire tv stick app search by categories, the 2.1.6 tablo does now appear under the TV&Movies category.

@Jaye Thanks for letting us know.

We’re pushing a patch (2.1.7) that should allow you and others affected by this to access the SETTINGS screen. It should be available by Monday afternoon at the latest.

I guess it’s a matter of what you define as an older model.

I’m sure there aren’t very many gen 2 units still being used.