I have a new Tablo 4-channel tuner. Got it Sunday.

Yestersay I noticed that it was kind of hot. Read up on it and I found that it is within spec to be up to 125 degrees F. Today I used an IR thermometer and measured the bottom of my Tablo, since it was uncomfortably hot when I was arranging devices on the shelf. THe bottom of the Tablo is measuring 135F.

It is on top of a credenza in an open room, subject to normal ventilation.

Any comments, advice or suggestions? This is by far the hottest (and I don’t mean that in a marketing sense) device I’ve ever owned and I fear for it’s longevity, since it’s not exactly cheap.

I run my 2 tuner on its side to help with the heat. Some people here put their Tablo on top of a laptop cooler.

Honestly, I’m not planning to spend more money remedying what I consider a design defect… It’s my expectation that people should make devices that work. It’s already burdensome with the external HDD. The Tablo website explicitly mentions that they designed it to be fanless. So it’s then disingenuous for them to suggest I should put an external fan on it.

I’d like for them to account for the excess temperature (10F) on an already excessively hot device. Did they do all the testing for this in wintertime in Canada? (I live in Texas, my house temperature during daytime is 80F.)

I have two 4 Tuner Tablos, both get very hot though I have not put an IR thermometer on them.

The 18 month old one is actually in a hallway that is not directly cooled during the summer. 80 degrees is common.

Never an overheating issue with either

You asked for suggestions from the forum.

We Suggest a Laptop fan.

You can argue with Tablo all you want about the design flaw, but we’re telling you what works.

Laptop fan… under $15 from Amazon.

Have both my Tablos on fans since it was discovered heat was a problem. No heat problems now.

what I consider a design defect

Why do you believe this is a design defect? Does it really matter what temp Tablo is getting to as longs as it performs is designed functions. What is the normal operating temp for Tablo? Is 135* within the specs?

I have my Tablo is a completely different room than my TV’s. I have walked by it and touched it, and yes it is warm but unless there is an actual problem caused by this heat I see no issue. Just because something is hot doesn’t mean it is not working within its normal operating temperature.

Like @snowcat I keep my Tablo on its side since it looks like it vents the heat from the underbelly.

You asked for suggestions from the forum.

We Suggest a Laptop fan.

and thanks. I assume that the “laptop fan” is really the laptop cooler that snowcat referenced? Does those run off USB power? I just love it when I have to buy additional gadgets to enhance current gadgets. oh wait, if I hook it up to the spare UBB port on the Tablo, that will cause the Tablo to run hotter due to the additional power drain?

Additionally, I’m all out of power outlets. I have two power strips in that room already to support the myriad of gadgets. (ISP modem, Router, switch, NAS, Ooma, Tablo, antenna amplifier, phone, Tablo, several USB drives, and the laptop I use for configuring stuff) Most of these devices have power cords that take up more than one slot.

Does those run off USB power?

You should be able to run a fan off the USB power. I couldn’t image these low powered fans causing the a device to heat up more than fan’s ability to cool said device. That would probably defeat the purpose of those fans.

I have two 4 Tuner Tablos, both get very hot though I have not put an IR thermometer on them.

The 18 month old one is actually in a hallway that is not directly cooled during the summer. 80 degrees is common.

Never an overheating issue with either

Good to know. If you can find the time, I’d like to know what temps you’re seeing. The over-spec temperature is of concern to me.

Maybe i the fullness of time I’ll just get used to having over-hot devices in my inventory and trust that they won’t catch fire and set the house ablaze (as poor quality power supplies can do!

I guess as soon as I get these devices arranged in an aesthetically pleasing and tidy manner I’ll stop going there and noticing how hot they are when I pick them up to rearrange them.

You should be able to run a fan off the USB power. I couldn’t image these low powered fans causing the a device to heat up more than fan’s ability to cool said device. That would probably defeat the purpose of those fans.

Why do you believe this is a design defect? Does it really matter what temp Tablo is getting to as longs as it performs is designed functions. What is the normal operating temp for Tablo? Is 135* within the specs?

I do believe it’s a design efect, since the tablo blog mentions 125F for the 4-tuner device.

I do believe it’s a design efect, since the tablo blog mentions 125F for the 4-tuner device.

On that same page, it states:

In both the dual and quad tuner Tablo unites the internal temperature will range between 10 and 20 degrees C higher than the baseplate, but this is within the optimal operational range of all the electronic components and way below the maximum temperature for these components (110 Degrees C/230 degrees F).

230 degrees Fahrenheit. The silicon would probably liquify at that temperature.

If you don’t want to put the unit on it’s side just get a couple of short 1 inch by 1 inch pieces of wood and put them under each side.

Certain surfaces that a unit is placed on can hold and/or reflect more heat then others.

Yes… I do use the Spare USB port to power the fan. The fan draws very little current.

They have been running like that for 1 1/2 years now.

Yea, I’m going to let this slide for now. I did think it ironic that this image was on the Tablo support page for the forum community. 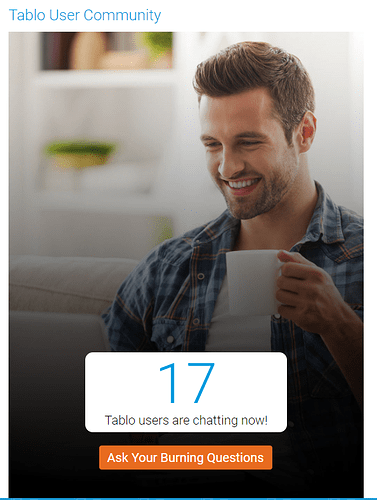 Next time I’m in an arts & crafts place, I’m going to look for a metal frame, alomg the lines of a metal soap rack or something and see if I can lift the Tablo off the shelf and if that ameliorates things a bit. In the meantime, I placed a ceramic dish under it to elevate it slightly off the wooden surface.

I suppose if I want to let this die a peaceful death, I shouldn’t comment on placing a metallic heatsink on the bottom of a device where it’s at the mercy of whatever surface the device is on with minimal airflow. After all, I’m not an engineer and what do I know?

I’ll just go back and do what I understand us old geezers are supposed to do, which is to tune in to Fox news and shout at the TV.

If you search the forum you might find the person who found some type feet or rack to place under their unit. I have 2 units that are 3 years old, they sit on 1x1’s on a real wood self. Never had a problem and it was 100 degrees 3 weeks ago.

You can also use the unit to cook bacon and eggs in the morning and pop popcorn in the evening as you watch your recordings.

I have used this from Newegg for the past year
EZOWare Mini Foldable USB Powered Laptop Cooling Pad - Supports up to 12" laptop Notebook
from Newegg. $5.98 sits under the Tablo … out of stock now but plenty of similar cooling pads on Ebay…

I would guess the components used in Table are commercial temp range, which is good for an ambient of 0-70C (32-158F).

Running at 135F on the outside of the unit certainly means that internal components are somewhat higher (unless they are directly heat sunk to the case), so you have at least 20F of headroom, and most likely the silicon die max temps on their processor/FPGA/controller is rated to 100C (depends).

I would just raise it up a bit off the surface at most. I don’t think you need a fan.

Would be interesting to hear confirmation from a hardware engineer at Tablo (that’s what I am).