It's Spring! Where is the AppleTV App?

When is the AppleTV app finally be released?
In January we were told spring! Can’t wait to have it before every other competitor launches their own product.

You should have mentioned you wanted to be part of the beta on the other thread, all the cool kids are currently beta testing it and it’s awesome.

Ugh…by the time its out, most shows will have wrapped up their season finales.

Lol yep in time for next year.

How do I get the beta? Does it work on the older ATV or only on the new thick one?

There is no beta yet. And it’s for AppleTV 4 only. Third party developers can only create apps for the ATV4. The older units will only run Apple developed apps.

Only the Apple TV 4 has an App Store so the Tablo app will be only for the ATV4.

So it’s not out yet. How long it’s taking so much time?

it would be nice if Tablo could release it before every competitor does in the next few months. Beat them and be the first.
Slingtv is prepping an AppleTV app for instance.

Sling TV is not really a director competitor. No DVR functionality.

Well, I guess this ca company has confirmed that it is SPRING - even in CA:relaxed:

Ah, spring. The time to sow seeds and shower them with love and care and well, water, so that we may expect a beautiful flowering in the months to come. Spring is also when those pesky weeds start poking their heads out of the soil. The joy of the garden is so much greater when they’re all pulled, isn’t it?

We sowed a few seeds and pulled a few weeds in your fabulous 1Password 6.2 garden and upgraded it to 6.2.1. You adventurous types will be happy to hear that we’ve added support for Safari Tech Preview. We also fixed an issue that occasionally caused QuickLook, viewing and exporting to fail when working with attachments. Webloc attachments will no longer cause 1Password to crash, sorry about that. Enjoy!

We love hearing from you! To provide feedback or get in touch with us, please join us in our discussion forums, email support@agilebits.com, send a message to @1Password on Twitter, or leave a comment on Facebook and tell us about the newest tricks you’ve learned

I’d worry about the folks with the Channels app now that they have stopped waiting on Silicon Dust to fix their API and are working on their own DVR solution. That is a pretty slick app.

Tablo should at least release a beta app so that we stop waiting infinitely.

Agree, I’d be perfectly fine with a ATV4 app that would allow me to only watch my recordings for now. I doubt it takes months to code that, seeing how the Plex tablo channel is working flawlessly at doing that. Having your recordings a bit more organized in it would be nice though 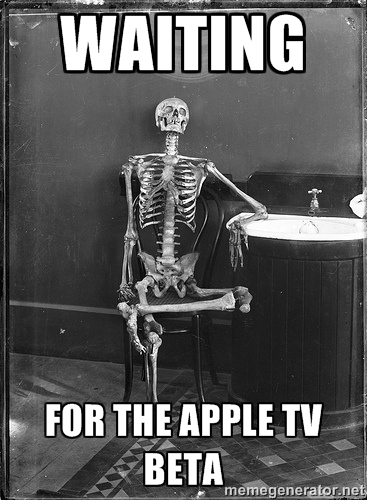 We’re SUPER excited for all of the things we have in store for this spring. We’re getting closer than ever to beta and we promise that the wait will be worth it.

Does one have to sign up for the firmware Beta in order to be part of any Apple TV beta program?

@Davebhc71 - Yes, you’ll need to have a specific firmware to use the Apple TV app.