If I could code...this would be my dream interface

I know this may be a pipe dream, but I would love it if there was an application that would aggregate all services into a clean interface. The user experience would be a heck of a lot more enjoyable IMO. The user could update through settings which service/services they have a subscription.

I know it may be a logistical nightmare, but hey I’m just putting this idea out there. So, what do you think of my “pipe dream”? 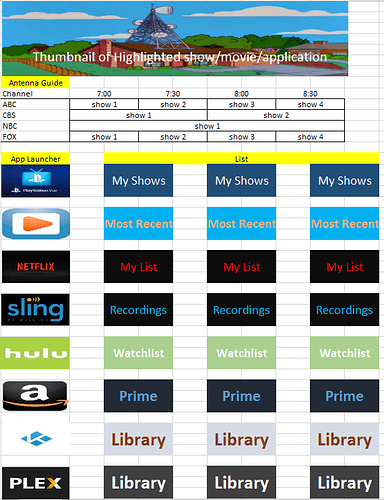 Doesn’t TiVo Roamio do that?

Only a select applications. It’s close though.
I would like it to operate on android, ios, roku, firetv. Not exclusively on tivo.

That reminds me of the Roku interface. Although I have to launch the Tablo app to see the antenna guide and I don’t get to see the “my list” stuff until I get into each application (netflix, plex in my case).

Actually getting that information from outside of the application would be really challenging, but I do like the idea of seeing either a “my list” or a “new” before launching the app.

I don’t see enough space on the screen to be practical having the live TV guide on the main interface but I can understand why you would want it.

… you have to run your “TV” in portrait mode. But think of all those iPhone videos that will look really great!

It would scroll, but keep the antenna guide at the top.

@eek Retrieving a list (either New or my list) would be the main challenge. Also the live tv guide does not have to be huge maybe showing a couple stations at a time. IMO, Too much space tends to be wasted on image art. But, I like to show “details” not icons while using my windows computer.

Too much space tends to be wasted on image art

Pretty much all Apps exist on Firestick/TV, Android, so this will be a good idea first to start. Well Kodi maybe a bit of a challenge since it’s not natively supported. But it’s doable unlike roku and iOs.