Hot Topic of the day: Tablo 4-Tuner - How warm CAN it get?

Right now, I’m experimenting with adding an air gap between the plastic bottom cover and the metal plate. It’s a very easy mod, just unscrew the 4 screws, remove the plastic plate, and added some metal washers around the stand-offs of the plastic plate and then put it back on. Adds about a 1.5mm air gap now. I’m going to let it sit horizontally and right side up for an hour and measure again to see if that helps lower the temperatures. If this works, the unit will pretty much look original and as intended with a almost unnoticeable gap between the plastic bottom plate and the metal plate. Will update with results later.

As promised, reporting back about my experiment with cooling by adding a small air gap between the plastic bottom plate and the metal bottom plate; which acts as a heatsink for the unit. Well, after letting it sit running overnight with air gap and horizontally right side up, the metal plate measured between 47-50C. So, not as good as flipping the thing upside down, but certainly a noticeable improvement over the usual 54-55C. If your ambient is warm, these methods could be a way to add a little extra margin.

next up, I have it sitting vertically right now and will measure tomorrow to see how well that orientation cools. I’m leaving the air gap in-place as I think that will be more effective for the vertical configuration anyway. To be honest, looking at the design of the plastic bottom plate, it doesn’t appear to allow much air flow over the metal heatsink. In fact, it almost seems like it creates chambers of static air between the plastic and metal, which in effective becomes an insulator.

in the end, I feel a bit uncomfortable with the amount of heat this thing generates, even though the kill-a-watt says the Tablo 4-tuner only consumes about 10-11 watts and I know Tablo has stated 55C is normal. I may try the laptop cooling USB fan idea too and take some measurements to see how effective that is and how much extra power it will consume.

Happy to hear, my channel master was a smoky mess I must say. You could smell the paint on the metal case in the hall outside my condo. I was really lucky.

Sorry but with a temperature of 55C how can that still be in normal range?

Am I reading this right?

My 4-tuner Tablo was warm to touch, but I went ahead and put this fan underneath and now it’s at room temperature (~30C):
AC Infinity MULTIFAN S1

It is very quiet, comes with rubber feet so you can just put it directly underneath Tablo. Highly recommended!

I don’t doubt that my tablo is in spec, but I am curious about the the many comments about managing the device temperature. I generally feel cooler is always better for electronics. Has anybody tried modifying the enclosure by adding ventilation holes?

I ordered the DEEPCOOL WIND PAL MINI Laptop Cooling Pad 15.6" Slim Design 140mm Silent Fan Blue LED from Newegg US for 9.99 with free shipping. I set my Tablo and 2TB Seagate usb portable drive on top of it and plugged it in. It makes NO noise and very little breeze …but my Table is now just barely warm to the touch and before it was HOT - 90++. And my HD seems to be just fine up there…so far - been running now almost 2 yrs with very few problems.

Now I know that they say that 90+ is normal for the unit, but I have always found that cooler electronics seem to last longer. and there seems to be some evidence on these forms that the cooled units work better.

I’m with you on this one. Few semiconductors or ICs really work well when very hot. May CPUs and GPUs begin to throttle back as they get hot. For most chips, failure point is about 185 degrees F (about 85 C). My thinking is “why chance it.”, especially when cooling is so easy.

I’ve placed mine on a laptop cooling pad and it has significantly reduced the temp. Before the pad, it was crashing multiple times per week, and was always very hot, to the point where it would not reboot without cooling down… Now, it crashes less, and doesn’t seem to be “heat” related. Reboots with the reset button.

Drilling holes in the case may violate the warranty terms. Tablo has stated that they use the heavy plate on the bottom of the unit as a heat sink. I agree with them – it does get hot. Not sure if additional holes in the case could provide enough passive circulation to cool it significantly, though.

But in many of the post and verbally 55 c is the tested running temp. Mine runs to hot to handle too. I tried putting it on a timer to reduce room temp due to heat from tablo, did not resolve the high temp issue.

I installed my Tablo 4 tuner about a week ago, and I stood it up on end, with the “T” in Tablo facing downwards, but my mistake was sandwiching it between my WD my book hard drive that I connected to my Tablo, and my WD my book live duo.

After a few days I noticed my Roku’s couldn’t connect to my Tablo, so I figured I would power cycle the Tablo, but when I touched it, it was very very hot.

I’ve been working in IT for over 26 years now, and I do know electronics can get very hot, but this was really hot.

I ended up disconnecting the power to my Tablo and letting it cool down, and then moved it away from my two WD external hard drives, and it hasn’t gone down since.

@robertjhocking - Yes, the Tablo needs room to breathe. It shouldn’t be cuddled up with other warm things. 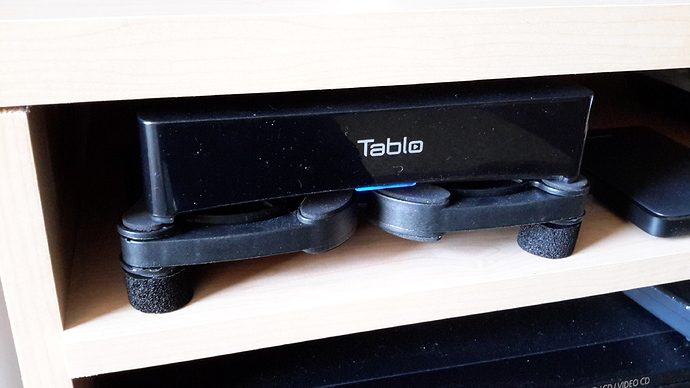 My Tablo is a refurbished Tablo 4, and it has always been very hot. I’ve had fairly regular problems with it locking up. Three times the first month or so that I had it. Then I put it on a laptop cooling pad. Now I’m having about one lockup per month. Still not acceptable, but much better. I refuse to believe that the heat isn’t harmful to the components. I know they don’t need to be at room temperature, but when the outside of the case is so hot you can’t touch it, I can’t even imagine how hot the components are getting.

FYI - I’ve seen that same cooler on aliexpress.com for $3-$4 for a single unit.

You can buy them in bulk for $1 each on alibaba.com

That’s a good deal! You could make a killing selling them to Tablo owners.

The metal trivet may have been creating interference.

Ha, sorry to be a Johnny-come-lately to this discussion (I’m still learning the ropes around here and haven’t found this topic until now.).

I’m so disappointed to hear this. I’m expecting this item (minus the cookies!) as a rack to store the multitude of devices I now need after having cut the cord. 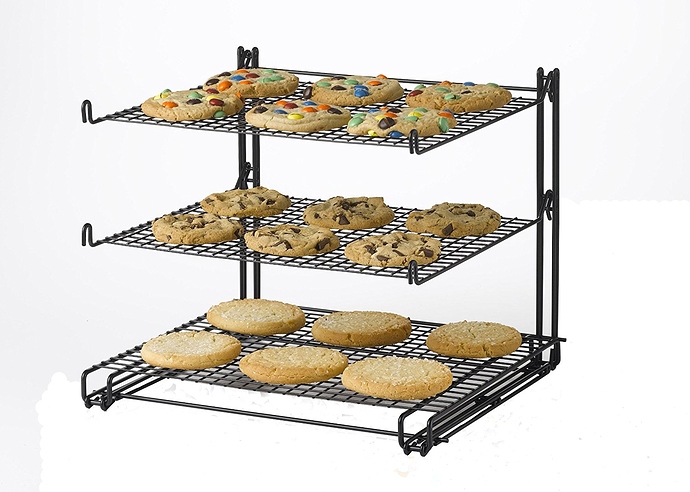 Now I see this that says metal devices (such as the aforementioned trivet), may/will cause interference with recordings?

I have my Tablo mounted in a recessed patch panel in a clothing closet. My computer room is technically the fourth bedroom

. Above the Tablo is a Netgear 24 port 1GB unmanaged switch. The netgear has a fan blowing air down toward the Tablo and everything vents out through the back of the patch panel. It is tight space but none of my equipment is hot.

Although this topic references the original 4-tuner tablo, the current generation Tablo Quad -

Doesn’t actually need extra attention for cooling. It may not have the same issue with interference. I have a Tablo Dual Lite, I have to sit my cooling rack across the top to keep my cat off it. I haven’t noticed any issues with reception, unless it’s about WiFi signal.

IMO, not that hot at all. They even decide to not bother installing a fan.