Display the number of tuners in the Tablo

I recently purchased a four-tuner Tablo. At least, I think it has four tuners. But who knows? Is there some way in the “settings” that I can find out how many tuners are in this particular Tablo? If there is presently no way, can you please make this answer visible somewhere in the settings screen?

Between now and when you add this feature, I’d really like to know how to tell whether the Tablo that I received has two tuners or four.

Doesn’t the model number tell you:

And I’ve heard of people going into the guide, picking the current time and starting 2 to 4 recordings to verify if all the tuners are working.

Next time I drive my car to the place where the Tablo is located, I guess I can look on the bottom of the device and use the information that you have provided – that the number of tuners is revealed by the fifth character of the model number.

This leaves unchanged the need for this information in the settings area.

I temporarily hooked up the tablo I got for Christmas to try it out (was out of town, wanted to try it out). One of the things I found a little disappointing was the lack of status type information page. Things like how many tuners are there? How many are recording? How many are supporting remote viewing? What are the next few shows that are scheduled to record (and when)? Guess to be honest, having used MythTV for several years, I was hoping for something along the lines of the MythTV status page I use frequently. Maybe there is something similar and I just didn’t see it? 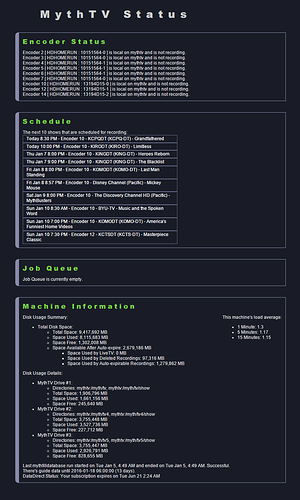 Isn’t the model number printed on the box it came in. Along with a statement that it is a 2 or 4 tuner with WiFi. Once you read the box it came in why would you need the same information to be displayed in the settings.

If you have a senior moment and forget, you can always pick the box backup and read the information again.

This isn’t a bad idea to display this in settings. Someone may repackage a 2 tuner in a 4 tuner box

Isn’t the information actually on the physical server. What is more important is whether all the tuners are functional.

That can determined by going into the live TV grid. Pick the current time and request 2 or 4 shows to be recorded at the same time.

Yes. The model number is printed on the label on the Tablo device itself - same label with the MAC address.

If you look at the LIVE TV grid, the number of stations flashing red will give you an idea of the # of tuners in use.

I hear that, 4 tuner and I find myself having to deal with conflicts

It’s rare that I find any conflicts @Jestep, and I always check to make sure that I don’t, given the 2 week window we have in which to search for them. This brings up an interesting point though, in that it would be nice to have a way to prioritize each show tagged for recording, so that if a conflict arises, the show with the lowest priority would drop off the to-do list. I was able to prioritize shows to be recorded with my DirecTV DVR. Hopefully, the Tablo folks have this on their road map, as I’m sure I’m not the only one who thinks this would be a useful feature.

Well, I have asked for notifications to handle things like this and other things like disk full, etc… Nada yet

Hopefully, tablo puts all of this nonsense on the same development path as the new Roku app. It’s been 14 months and only 50% of the Roku app development has been release.

Playing on everything streaming and being a small company has slowed rhem down.

The last customer survey I saw indicated that a Roku was used somewhere in the tablo ecosystem 85% of the time. The idea should be to satisfy both the existing customer base and new client opportunities.