Considering Tablo, looking for feedback on a couple points

Hi everyone! I’m considering taking the plunge to “cut the cord” moving away from DirecTV to an OTA solution. I’m considering options, including Tablo, but I’m interested in feedback on a couple things to help me decide. I thought I would include a diagram of my existing (black) & proposed (purple) setup in case it helps. 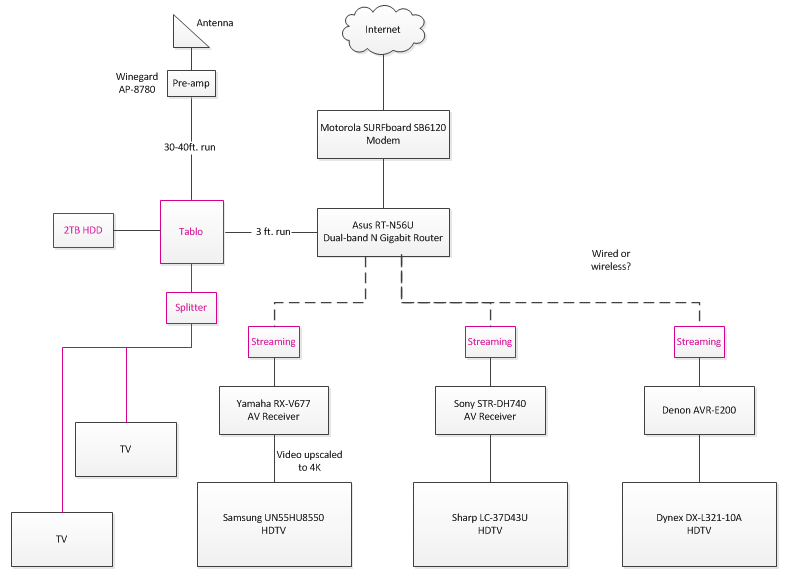 Here are the points where I’m looking for some feedback:

Looking forward to hear your thoughts on these?

You can’t split the Tablo out to TV. It would be OTA antenna split to Tablo antenna connection. Keep Tablo easily accessible to reconnect network, etc. Tablo has an internal wireless internet to initially connect to home network. Then Tablo recognizes wired LAN connection. Streaming recordings to 3 televisions, might push your network. Others can advise on antenna and which casting device to use as remote(s). You might read posts on Tablo Exporter script regarding download of all shows from Tablo hard drive via wired network to computer drive. Not sure that is relevant, but another piece. I use the Android Tablo app on a CipherTV (Canada West). Had been using a wired iPad. Hopefully others can post more helpful information.

Remember that the Tablo splits the antenna internally depending on if you get the 2 or 4 channel model. You will also need a USB 2 hard disk. Note that with the 2.2.2 firmware you can use just about any disk. They tested a Seagate 5 TB Desktop expansion model without any problems and is what I upgraded to from a 1 TB WD Elements disk.

Not all routers are created equally. What router do you have? Some are better at streaming.

Wired is best but I have everything witeless and it works. Note no other streaming going on while watching Tablo.

With today’s an announcement mentioned of FireTV 4 and expected Roku nouncement( I assume Oct or Nov) of the Roku 4. Do you have Amazon Prime? If you do, then FireTV is the best. If not, then Roku 4.

As others said, your diagram shows the splitter after the tablo. You want to use one splitter or distribution amplifier if you can, with all your devices coming off of it. I’d recommend running OTA antenna to all of your TV’s, if you can. You can watch live TV with the Tablo, but you add lag (if you surf channels) and lose 5.1 (at least for now)

With the new firmware, I am running a 5 TB drive and now recording at 1080p vs 720p with no significant issues. Yes, there are Roku reboots and a Roku that keeps dropping of the network, but that is not a Tablo issue.

Great post by the way, only thing missing that might help further is your TV fool report and where you’ll be setting up your antenna. Some expert antenna users could help you with that here. http://tvfool.com/

a. Wired at 1 GBPS (CAT 6) will always be better. If you have to do Wireless make sure you are using a 5 Mhz network.
b. I’m anxiously awaiting for the Next Gen Apple TV. The Tablo team is working on an app, no ETA. :A dedicated app will take the “airplay” issues away.

From my understanding, you should avoid any of the streaming “sticks”. I would go with the Roku 3 or Fire TV, the more expensive devices with better processors. I imagine the Nexus Player would work well, its on sale now (new device out soon I imagine) and has decent specs.

Each devices interface is different so its hard to pinpoint which will be best for you. Can you provide some input on your price preferences, apps that you use, and current ecosystem of devices (phones/tablets)? This info might help with pinpointing the right choice for you.

Personally I have a Roku and I’m growing tired of the bugs, some will say they have none but I find it to not be a stable environment. Other than the bugs, its a clean and simple interface. I would probably move to the Nexus Player if the Apple TV wasn’t coming out in October. I don’t like the FireTV locking me in the Amazon ecosystem.

@strav22 I agree
about FireTV and I only got the stick because of price, easy to travel, and Tablo Connect.

Thanks everyone for the great feedback so far. I want to read through it all in more detail and respond. But one thing I wanted to add was around typical viewing habits and how that plays into the question of streaming device to choose.

We mostly watch network broadcast TV and record a number of shows for later viewing and “time shifting” to avoid commercials. Other main viewing is sports which is generally on local channels but in some cases are in regional like Fox Sports North which I think is going to be tough to get. Otherwise it’s basically watching live TV or some Netflix or HBO programs on demand.

From my understanding, you should avoid any of the streaming “sticks”. I would go with the Roku 3 or Fire TV, the more expensive devices with better processors. I imagine the Nexus Player would work well, its on sale now (new device out soon I imagine) and has decent specs.

It may be so that a lot of people have had bad luck with the sticks, I don’t really know, but not for me. I have a Roku stick (in fact it’s a refurb I picked up from Newegg for 15 bucks) and I’ve had zero issues with it.

I’m not saying I recommend the stick, but I would not rule it out either. I have no idea if it’s up to top performance as my requirements are not as stringent as some (my 57 year old eyes really can’t tell between 720 and 1080

Plus 1 for Nexus Player … works perfectly.

My Chromecast works well when close enough to the router, but when in my wife’s studio, the wifi signal drops to a point where it struggles… Thinking about replacing it and just keep it handy for travel.

There is Sling TV, which I had my free month when it came out. it gives you all the ESPN, CNN, some other channels. The main problem with it, that while a great idea, they did NOT (I don’t know about now) have enough bandwidth for streaming games. The more people that watch it, the more bandwidth required. For example, IF the Superbowl were on ESPN or any channel on SlingTV, it would be UNWATCHABLE. The other two problems are only one stream, and you can not record it.

One thing that hasn’t been mentioned in this thread is NO Roku device will work away from the Tablo. Fire TV and Fire TV Stick WILL both work at a friends house, hotel, etc. Roku might be able to be used away from home WHEN the name/passsword is implemented, but NO IDEA how many years that might be.

Now questions for you:

For the price I would only recommend the new FireTV if you have Amazon Prime. I would wait for the Roku 4. The Roku has many channels to watch including The BW that are not on FireTV. Some, such Netflix, Smithsoian Channel, Hulu are on both devices. I find the Roku easier to update to a new version of the app than the Roku. Both offer “update automatic” box you can check. If you do, then it checks once a day. It is easier to add private channels on Roku than FireTV. For example:
To install new Tablo Preview Beta on Roku, I simply had to go to check for updates, and BAM! The new channel updated. To install the new Tablo Beta on FireTV, I first had to click on a link that was sent to add it to the Amazon cloud. Then Sync to clould, then install. In my mind, I should have just been able to update, since I already had the prior beta installed.

There is LOTS of additional free stuff on the FireTV if you have Amazon Prime (I don’t). I only got the FireTV Stick so I can watch on TV remotely. I have added a few other channels that are on both devices.

We have used the Roku, the AppleTV, and the FireTV. At the moment, the winner with regard to the Tablo app is the FireTV. Our Roku experiences the rebooting issues when you FF that have been discussed in other threads. The standard Roku app contains all of the features but has a clunky interface. The Preview Roku app has a nice interface, but only the LiveTV and Recordings feature. Eventually, I expect all of this to get resolved - the Preview app will be completed and replace the standard app and Tablo/Roku will fix the reboot bug (I hope). AppleTV didn’t have an app store open to developers so it was limited and we sold it (you had to use Air Play to cast from an iPad or iPhone to use Tablo). The new AppleTV will change that, but it will probably take some time to get all the apps into their store.

The FireTV app is full featured with a nice interface and has been working bug free for me. As others have mentioned, the FireTV is tied to Amazon’s ecosystem (in the same way that Apple products are tied to iTunes). So it is a great device for accessing Amazon content like Prime videos and music. But it’s app store is not as complete as Roku’s. It does have all of the major streaming services and I haven’t yet encountered anything I wanted that is not available in its app store, but hard core streamers may find it lacking compared with Roku’s channel store.