I understand that the future of Commercial Skip is in question now. Future subscribers will be unable to get this feature. This is one of the primary benefits to being able to record and watch back later.

I also understand that one of the reasons given for this is the ridiculous amount of cloud resources required to handle the current Tablo commercial skip post-record processing. So here’s a crazy idea - Move commercial skip processing to the local Tablo and let it do the Commercial Flagging (CommFlag) during down time. I defer to systems like MythTV that function in this manner. An average Tablo probably spends the majority of its time idle and not recording or streaming 24/7. Use that idle time to run the CommFlag processes. Queue up shows and then give them a flag or icon once CommFlagging is completed.

You could also add a local server like a raspberry pi and farm out the processing to it. A simple add on box to the tablo.

If the tablo had the process power… it would. If you read some of the early post when it was announced TabloTv/Suppost discuss this, I believe.

Older devices will always get aced out of features, especially those features that require increased processing and memory. It’s the way of the world.

I always thought that processing comm flagging in the cloud sounded way too resource intensive when there are devices probably sitting idle the majority of their day.

Old cloud, for sure, but for the past 7+ years, cloud resources are spun up on demand. They don’t sit “idle”, they sit “off”. And since you’re billed by use, it costs nothing (or practically nothing) when not in use.

But there is also the cost of the upload/download for analysis as well.

I currently have commercial skip, it works ok. I previously had Tivo and the skip was great when a first got it a 6 years ago. Then the networks started to get sneaky and introduce ads in such ways that commercial skip became less effective.

I would gladly give up commercial skip for a more intuitive fast forward. i.e., Most commercial breaks are around 3 minutes. I would like a configurable fast forward. Right now it is 10 second increments unless you use traditional 2x, 3x ffw. Configuring an option based on time would be cool. i.e. 1, 2 , 3 min,

Years ago I had a device called “Replay TV” which was a DVR for cable. It did commercial skip locally and was pretty good. Tivo did the same AFAIK.

It would be nice if there was an API that would allow you to pull off a recording, process it yourself, then put it back on. That way you could do your own editing with something like MCEBuddy, comskip, etc…

If you’re going to pull the recording off and process it, why bother putting it back on the Tablo? Just store it in a media manager like Plex or Emby. That way you can back them up, use a RAID, etc. IMO anyone using a Tablo with a cheap consumer drive as long term media storage is just asking for trouble.

Ease of use. Remember not all members of families are tech wiz’s I do good to get my wifey using the tablo. To add yet another method to watch her shows would cause serious discontent.

That would be nice, but the complexities and the db stuff that also needs to get edited just adds a lot of places for things to get mucked up. Best to leave well enough alone. If you want to download, edit, and move to another platform, then go for it. Tablo is what it is. Live View, Record, and Playback, not a librarying device. I also think that manually editing out commercials is a waste of time especially for shows that will more than likely be deleted after they are viewed.

I still say that a local CommFlagging routine, even if exceedingly slow or delayed, would be perfect. CommFlagging doesn’t need to be done quickly and can be done when Tablo is idle. Recorded shows (generally) don’t get watched right away - and if you do watch them right away, then manually FF. Shows would get queued for flagging and then they get done when they get done. After CommFlagged they get an icon that says that flagging is done. MythTV does it this way.

Maybe add a second playback button to playback using CommFlags or not. (not sure why you would choose to watch without CommFlags, but at least that might keep commercial interests a little at bay.)

So how is the existing commercial skipping performed? Does it ship the program off to the cloud for processing and then ship the commercial points back to the local box to be used? Is any processing done local?

See here. Processing is done in the cloud. 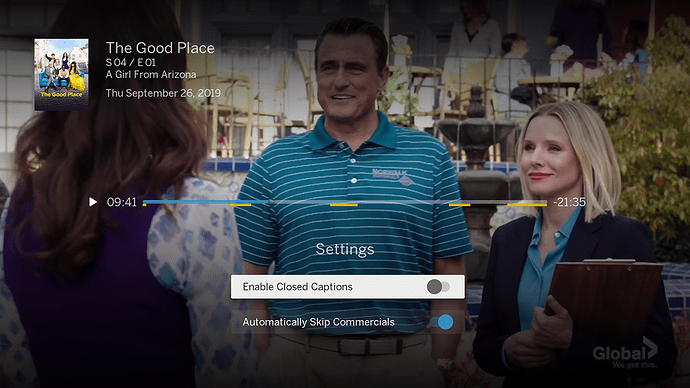 When Automatic Commercial Skip is enabled, the majority of completed recordings will play back without ads on our most popular apps and in the interface of TV-connected Tablo DVRs like the Tablo DUAL HDMI and Tablo QUAD HDMI.

Thumbnails are uploaded to the cloud server, not video. Then a playlist with the skip points is returned.

In the very early days, of com skip I stumbled across a beta.tablotv site from some real old posts. You could enable comm skip for testing. There was an actual playlist you could stream via external players, asked a 3rd party developer about exported commercial free video. Post marked

as well as site.

Last time I had looked physically at a drive (some time ago) it seems they now have a times list for the player to skip. Not actual new playlist, just a JSON file with timing for the player. I’m sure it’s makes sense to say it’s a new playlist.

This was during the free trial, after the beta… after it became available for the web app. I don’t access to com skip so I can say how it may have further evolved on the local side. I did look promising when we stumbled over the skipped playlist, using it for exporting.

Easy to use video editor for cutting out the ads? Third Party Apps (Rippers etc.)

It looks like they’ve completely overhauled the way the handle this now. There is no longer a separate playlist

I use the TabloTV as simple tuner for NextPVR, much like the HDHR but better quality IMO. All recordings are saved on a local or network drive and I use the fantastic standalone comskip program to process them. The generated edl files works with NextPVR clients and Kodi.

Can you elaborate a little bit more on how Tablo works with NextPVR and the setup process, or refer me to a website?

Install NextPVR via the instructions on https://forums.nextpvr.com for your platform and then follow this for the TabloTV tuner TabloTV Extra.