Cord Cutters News (limited edition) Coffee Cup. It’s stark, bold and beautiful. Only fifty of these in existence (so far), I’m a proud owner. And yes, I need a life. 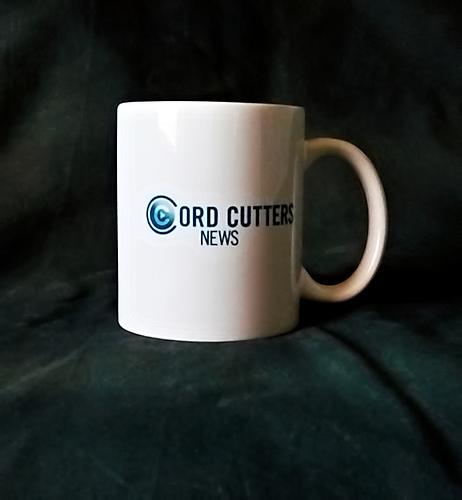 …
Will sit prominently on my desk, when I return to Los Angeles (hope it doesn’t get broken on the airplane). Now, if only Tablo made one.

And we’ve talked a lot about doing more Tablo merch on our web store. Maybe that can be a 2019 project.

Looking forward to that, I’ll try to be the first order in, when that Tablo cup rolls off the line.

Staples will do custom mugs (at ridiculous prices). I do think the blue/white/orange Tablo logo would look pretty good on a coffee mug.

Being Canadian, you could steal Telus’ marketing gimmick from a few years back and get a bunch of small stuffed animals (or TVs) to hand-out.

Maybe a limited edition Tablo 4-tuner with a built in coffee cup warmer (and more powerful power supply to handle the draw)?

Great ideas. Roku does accept 3rd-party screensavers, though it is at significant cost and (for some reason) they don’t have a lot of takers. I’ve seen ones from Drama Fever, Haystack TV and a few others.

That cup warmer is pretty cool.

Looks like they weren’t kidding, it really was a very limited offering. So between us, you and I comprise 4% of every CCN coffee cup in existence.

But was the CCN logo on both sides of the coffee cup so it could be used by either left handed or right handed drinkers?

Thankfully, the logo and print is on both sides, so you need not be ambidextrous to use it. Everybody qualifies.

I like this idea. Not into logos or names on my cups hats, clothes etc. I do like the idea of a cup that says something like’ “I do it OTA” or something like that. When people hear I’m a are cord cutter they have their own idea what it is even though they have never done it and don’t know how to do it. On the other hand, OTA is an acronym most people don’t know and it’s now a conversation starter. Forgive me, back into obscurity…

Tell someone you’e a cord-cutter and sometimes people will look at you as though you’re trying to “Stick it to the man” (as the Pluto TV guy says), or that you’re a member of some sort of subversive anti cable group. You don’t have to hate cable to love OTA, you can do either or both.

I thought the Tablo already had a built-in cup warmer. Just place your coffee cup directly on top! No USB required!

I thought the Tablo already had a built-in cup warmer. Just place your coffee cup directly on top! No USB required!

I’d wait for the waterproof model to come out.