Can't get past extreme pixelization

I have a Tablo Quad, which I have spent the last week-plus trying to get set up. I’m getting weary of trying to watch programs that pixelate to the point you can’t figure out what’s happening, and the audio is broken and not understandable. The situation is severe enough the automatic commercial-skip doesn’t work.

I live in a valley with mountains over 2000 feet either side. My elevation is 80± feet while the transmitter locations are both over 3000 feet. One transmitter site is 6 miles away, while the other is 11 miles. The are separated by almost exactly 90 degrees, which means I need an antenna panel for each. My antenna is mast-mounted above my roof (about 20 feet above ground). That should pretty much guarantee decent reception. However, looking at my Tablo station listing, and picking a channel with four green dots (which means, I suspect, I should get a good picture), the picture is so fractured, you really have to pay attention. I even have one channel showing four green dots and then showing low signal when I try to connect.

The Tablo is supposed to be replacing a Tivo Bolt 4-tuner. I had very little problems with pixelization with the Tivo (other problems, you bet, just not pixelization.) If this pixelization problem can’t be resolved, however, the Tablo is going to be returned and I will just have to live with the Tivo. I’ve already been told the Tablo uses a different scheme to resolve the TV signal than Tivo, which is OK by me, but if it can’t resolve signal as strong as I receive, it proves nothing.

Try running the Tablo with no HD and see if Live TV still pixelates. HD could potentially be an issue.

Do you have direct line of sight with the transmitters?

If so,and considering the short distances to the transmitters, you might be overloading the Tablo tuners. 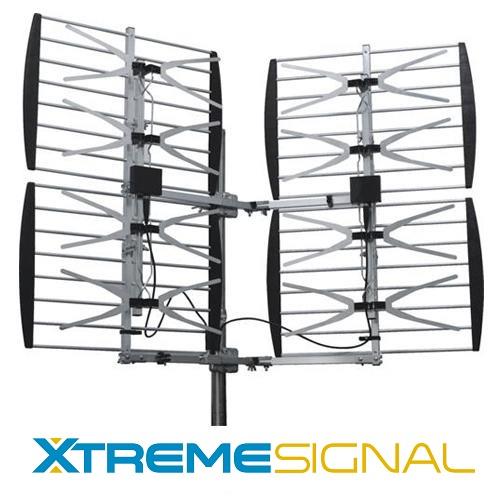 Xtreme Signal 8-Bay Bowtie Outdoor HDTV Antenna 65 Mile VHF/UHF (HDB8X) The HDB8X is one of the strongest low-profile HDTV antennas on the market. The 8-bowtie design is what allows us to acheive the power of some 10ft antenna in a small form factor....

As @sgnadeau points out, you’re likely overloading the tuners on the Tablo with too strong of a signal.

You may need to try pointing the bays a bit off the optimal direction, or adding some attenuators to tone the signal down.

I’m not having any issues whatsoever. I was replying to the original poster.

What’s the point of running without HD? Isn’t that the reason for having an LED TV set and digital TV transmissions? If HD is the problem, what’s the solution?

Trees are an issue in both directions. In one case, the trees are next dooremphasized text** in the other case, they’re a couple hundred feet away. In either case, I can point the antenna panels using information from Antenna Web and a compass. As far as overloading, I had to continually upgrade the antennae to finally arrive at a point I was getting decent reception from both transmitter sites with the antenna array I’m currently using. I would hope I didn’t go to all that work for nothing. However, it still may be worthwhile to try an attenuator to see if overloading is a part of the problem.

That’s the antenna I’m using, with two panels pointing to each transmitter site.

As I said in one of the replies above, I worked my way up to this antenna arrangement, because nothing short of it gave me much reception. If I’ve now gone too far, I’m going to be hugely disillusioned!

By HD they meant hard drive, not HD as in High Definition.

As @Nilex said, I did mean Hard Drive. I had an issue with pixelation and freezing (looked just like a reception problem) - turned out to be the hard drive.

I replaced with an SSD, no more problems. In hindsight, I suppose it could have been a weak power supply.

I had the exact issue and replaced my Tablo powered HDD with an HDD with it’s own power supply and I no longer have the pixelation and freezing either. So my original issue might have been power supply related as well.

Interesting… I have a 2Tb SATA drive in the Quad. Sounds like I may want to take it out, mount it in a USB case with its own power supply and see what happens. I didn’t want to do that originally. I really didn’t need two wall warts when I thought I could get by with one.

And while I’m at it, I may as well also address the too much signal ** issue. This will be my next thing after the hard drive, and, if I’m adding attenuators, anyone have a suggestion how big/small? They’re about nine bucks apiece on Amazon, so I’d just as soon try one that would immediately make a difference.

Before you do that much work you can run a simple test. Reboot your Tablo (quickly press the blue button) and then unplug your hard drive from the back of the Tablo during the reboot. If the problem goes away viewing live TV with no hard drive connected then I would suspect your hard drive may be to blame. And if it is your HDD, simply adding an enclosure with its own power supply may not help as the HDD itself may be bad.

Two problems with this scenario: 1) the hard drive is in the Quad enclosure - I was hoping for one less thing on the shelf in the equipment stack. 2) It’s a brand new hard drive, bought especially to be used with the Tablo. I know, it still could be bad, but what’s the chance of that? So… take the HDD out of the Quad enclosure? But will it even run without the drive?

But will it even run without the drive?

Yes - you can stream a single Live TV stream without the drive. This is the recommended approach to remove the drive from the list of potential problems. I’d be surprised if it was the issue in this case, but it’s an easy test that you can do yourself in a matter of minutes and requires no additional purchase so it’s worthwhile.

After all of the above, I learned today the problem is/was mechanical. I purchased supplemental VHF stick to go with my all-uhf antenna because two transmitter sites were broadcasting in VHF radio frequency. Although the all-UHF antenna was doing a credible job, I figured the VHF supplement wouldn’t hurt. My grandson-in-law went on the roof to add the stick and found the antenna misaligned considerably! The problem, as best as I can figure, goes back to the roofers. The antenna mast is on a chimney-mount, and they bumped it. I could see it wasn’t standing straight, so I had them come back and get it square. What I didn’t realize was they twisted the mast when they reset it! Between the VHF stick and re-aligning the whole antenna structure, I now have excellent reception! Pixelization for almost all channels is gone. The one channel that’s still a problem I can get on You Tube TV. All done.