I have been searching for my answer for 7 hours now, submitted a trouble ticket, and called/left msgs with support and no help yet. My phone confirms that i have many hours of programs recorded. When i access table it shows no programs recorded. i’ve rebooted/unplugged, all that stuff. anyone no the fix for this?

That post was made yesterday but it didn’t post. got an email from tablo. i rebooted as suggested without results. next was to delete tablo and re add. it tells me to open chrome, access mytablo, and open the sidebar. i can’t figure out how to open a sidebar. anyone can help?

situation: tablo shows no recordings. phone app shows them all. tablo preview shows a few recordings but before they can all show up on review, it cycles back to the tablo icon.,

@kitesurfer - Click on the three little lines on the top left corner.

there are not any 3 little lines on the left had corner.

You’re looking for the menu icon in the top left as circled in the image below. 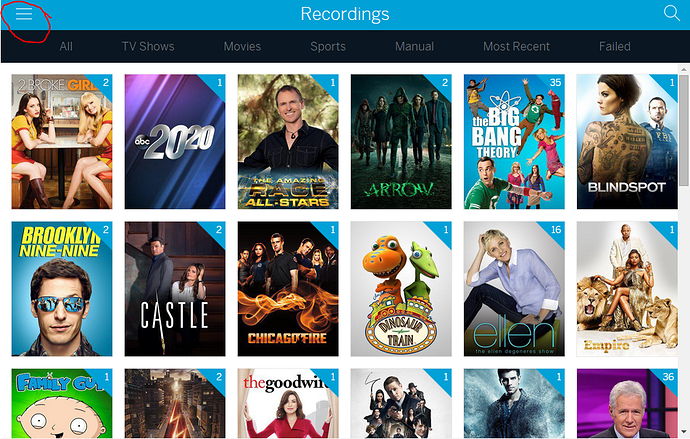 ok, i found it and followed the instructions–deleted and re added. all my recordings are still there in my phone and my computer. but on the tv, it starts to load the recorded tv icons and after the first 6 show, it recycles back to the tablo icon.

What device are you using to watch on your TV?

roku3 on one tv, roku stick on the other.

OK - it sounds like this is an issue that requires intervention from support. They’ll be in touch with further instructions.

thanks for your help. I’ve been ‘working’ with support since monday…

No need to ridicule TabloTV. They’ll get you fixed up.

ridicule? try FRUSTRATED! This is the 3rd day of me trying to figure this all out. Thanks form your encouragement.

For sure it does suck to be me! i’m a plug it in and hope it works kind of person as that is the limit of my expertise. If i knew everything about computers, i would be an admin LOL

so when will they be in touch? I bought this thing thinking it would be the best thing since sliced bread. I’m sure it would be if it worked. but it does not! My support ticket has been open since monday and today is Friday.

@kitesurfer - Sounds like the team was waiting for you to send a phone number. We’ve got it now and we’ll be in touch shortly.

i p;rovided my phone number monday…and a couple times since. this will be the 4th day that i’ve sat by my phone and tv.

dAVID from Tablo just called and had my tablo working in less than an hour. i am so happy now that i can see who won Americas got talent

and my wife can watch 36 episodes of Ellen…and NASHVILLE…I’M ecstatic! thatnks David!

What did he do to fix it?

why should he tell me? i couldn’t find 3 little lines…