One of the unintended results of cord cutting (for me) has been a proliferation of alternate streaming devices, appliances and accessories. This led to the next step, which was in finding a good universal remote, which then resulted in my (renewed) discovery of Logitech Harmony products.

Taking it one step further, I learned about the “Caavo”, which unifies Devices and Remotes, as well as content in various paid apps (such as Prime video, Hulu, etc.). Caavo takes a different approach to “universal remote”, by aggregating your Devices into one box … which is controlled by (it’s) one remote. 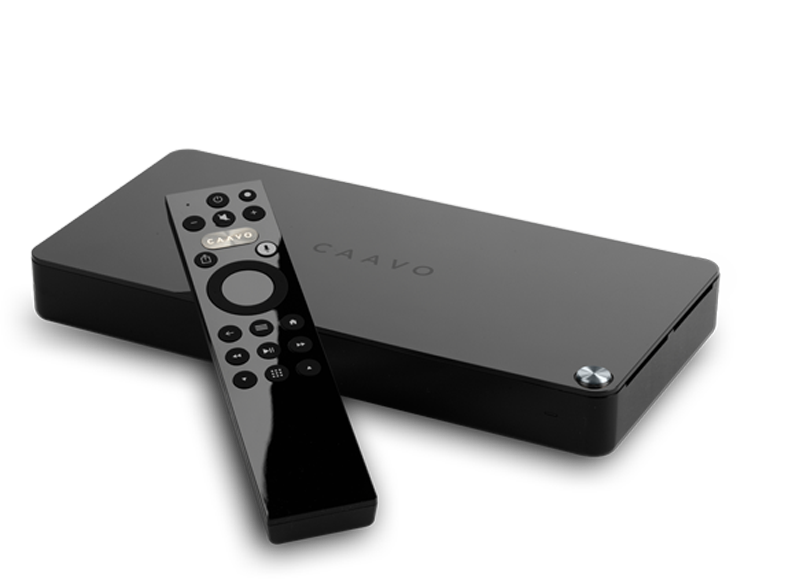 I had mixed feelings about this, but for $100.00 felt little to lose. Setup was a bit painful, after that, I felt it was a good move and worth the money. I used all four HDMI ports on the Caavo, leaving three available ports on my sound bar and a couple on the TV itself.

The Remote works well with Amazon Fire TV, Roku, Blu ray players and other devices. In addition to the Fire TV and Roku, I hooked up my Channel Master Stream + and AIR TV player. If for nothing else, it’s a great HDMI switch, which is easy to control.

Caavo has something they call “Deep Linking”, which allows you to search for movies, programs, etc. over all platforms, browsing curated links and some other benefits. The subscription cost for Deep Linking is $1.99 per month or $20.00 per year. It is not required, but I’m giving them the two bucks for now, to see how this goes.

Is this better than a conventional Universal Remote? Not sure because I love my Logitech Harmony Remotes, and probably prefer the more conventional approach, at least until I’ve had time enough to assess this oddity:

The Harmony 650 Universal Remote is pretty amazing. I’d had a Harmony 200 laying around in a drawer for several years & recently pulled it out to config for my Toshiba Fire Edition TV (works GREAT). I have two boxes that are of some concern, as they’re not identifiable by any of the generic appliance terms (TV, DVD, etc.): (1) Channel Master Stream+ and (2) AIRTV Player from Sling. Setup was easy, both boxes are in the (vast) Logitech repositories and identified instantly when typed in. Sel…

I’ll have the Logitech product available to fall back on if this doesn’t work out. A little bit of time will tell.

This thing is pretty cool. Considering my TV is also my Roku, my media files come from a server, and my Tablo is my DVR I don’t really need this. I’ll have to find something extra to plug into my TV so I can justify getting one of these. lol

If you’re needing more to plug in, I’ve got a Stream +, an Air TV player, a Xiaomi Mi Box, an (unopened) Nvidia Shield, an assortment of “Chinese cheapies” and a drawer full of old Fire Sticks, Rokus and Chromecasts (haha). I do think those Roku TVs are pretty cool, and I like the GUI / Guide on the OTA part of them.

If you’re needing more to plug in, I’ve got a Stream +, an Air TV player, a Xiaomi Mi Box, an (unopened) Nvidia Shield, an assortment of “Chinese cheapies” and a drawer full of old Fire Sticks, Rokus and Chromecasts (haha). I do think those Roku TVs are pretty cool, and I like the GUI / Guide on the OTA part of them.

I didn’t see the HDCP number on the site. Problems can arise from not having the current version, just FYI. I know the Roku premiere I had (and sold) would not work when plugged into my older A/V receiver.

Not unless members of your QA Team are incorrigible hoarders of electronics and devices.

Not unless members of your QA Team are incorrigible hoarders of electronics and devices.

At least we have a good excuse.

Most people with OCD respond to a combination of SSRI and behavioral therapy. Some also need anti-psychotics.

Others are never cured.

I try to limit my digital hoarding to just spares(redundancy) for existing devices. But you can never have enough extra underwear.

I’ll go along with you on the underwear part of this, adding that they must always be in top condition, as you never know when you might be in an accident (can’t let the EMTs think you’re a slob).

Interesting Tekthing just featured this device today. They claim there have been improvement over the original.

Price was the first improvement. The original had eight HDMI inputs, did not have 4K compatibility, was larger and a bit more difficult in setting up. It was very beautiful, less capable than this newer / sleeker version.

Works well with both Alexa and Google voice commands, finally got around to trying this out. Typical search routines (find me a drama, what’s on Hulu, etc.), but the greatest convenience I can find from this, is to say “shut it down” and Caavo will turn off the TV, the AVR system, Sound Bar and all associated devices, apps, etc. I’m not big on voice commands, but this is a good one.

Does the Caavo do strange things if you are listening to Drake’s song “Shut It Down”?

It doesn’t need any help in doing strange things. Still getting used to it.

I instead took a rather minimalist approach to streaming control.

When I first read about Chromecast, it appeared to me that I could use my phone for all media control. So I bought a couple of 2.4 G models, hooked them up to my TV’s, and started using my Android phone and Chromecast for streaming movies, videos, music; and to display anything and everything I could access from my phone, ranging from Skype sessions, to photos and surfing contests, casting the whole Android screen if need be.

It was great, and there was usually no load on my phone, since the video traffic was most often direct from my router to the Chromecast device to the TV; exactly what I wanted. It was very general and very orthogonal – could handle most anything, but with all apps installed only on my phone, to the extent that my whole digital world was with me on my phone, whether home or away.

Along the way, I had acquired several HDTVs. But I was unhappy with the quality of soccer games via cable, so I also acquired some HD antennas.

Then I read about Tablo, and noted that it supported Chromecast, which completed the picture. So I purchased a 4 tuner Tablo and a lifetime guide subscription.

I had read that Tablo was more Beta quality than a polished product, so suitable for early adapters rather than general consumers. But I had no idea how rough the Chromecast support was.

But I stuck with it, beta tested one of the releases to see if I could help with Chromecast stability, and acquired Chromecast Ultras to smooth out the streaming; but I was still having navigation problems, up until September 10th.

On September 10th, a whole bunch of the navigation problems went away. I still have no idea what cured these problems, and would be very interested if anyone has insight into this matter. My best guess is the fixes where in a Google Play Services release, but it might also have been a Tablo release I didn’t spot. My recent post regarding the resolution of navigation issues is here:

Beginning in September 2018, switching programs while using Chromecast no longer causes the Tablo app to abort. And stopping and resuming casts no longer causes app aborts. Prior to this, any attempt to switch from one program to another while casting caused the Tablo app to abort, and left the cast stranded in such a way that external cleanup was required before the app was restarted. Even stopping then resuming a cast while watching a program caused similar problems. A byproduct of this was …

The other major milestone was in December 2016, when I upgraded from Chromecast 5Gs to Chromecast Ultras. This basically cured all of my streaming issues, even at the highest quality recording level.

So, as of September 10th, Tablo with Android and Chromecast Ultras is working very nicely. There are still a few little glitches, and I haven’t checked everything on my list, but Tablo is vastly improved.

Caavo has been updated to work with Channel Master Stream+ and other OTA DVRs & components (such as Tivo Bolt, etc.). I experimented around with this and found you can now search for OTA content, switch channels, access channel guide, etc. on the Channel Master DVR … by Voice.

Stream + from Channel Master Off Topic

My Stream + arrived yesterday and it is Fantastic! I’ve never been crazy about the Android TV platform, but I love this streaming appliance, nonetheless. The Channel Guide is great. As an ancillary benefit to the OTA guide / grid, you can configure it to include Live online content, all on the same grid. I set this up with Pluto TV, for example, and it’s great! Once you’ve added all your desired sources, you can then go in and trim it down to the specific channels you wish to appear in the guid…

Just for the heck of it, I then tested it with my cheapie Mediasonic Homeworx (thanks again @MarkKindle for helping me discover this little oddity), and it works as well, something I did not expect. I originally bought the Caavo as a Universal Remote solution, it’s turned out to be much more than that and if I used it for nothing more than a voice-activated HDMI switcher, it would be worth every penny. This little upgrade is icing on the cake.

Caavo is on sale for $59 today at Best Buy, I think this is fantastic. Picked one up, to be used as a gift.

What is a HDCP number and how might it be important?

I do not believe there is a problem. I’ve used (and am using) my Caavo with the following peripherals:

I’ve been using my Caavo (two of them, actually) for over a year, have not had a single problem with a single peripheral device. My information is based upon actual, hands-on use and experience. So much so, that I bought a second Caavo, which I use in a vacation home.

Further: Bought one as a gift, while on sale, the recipient has had no problems either. She uses Roku, Fire Stick and a (Matricom G) android TV box.