I am sorry for those of you that like to watch infomercials but I would like to prevent the infomercials form filling up my prime-time grid.  It would be really nice to blacklist them or even better ignore shows based on timeslot and channel (e.g. ignore everything form 11PM to 4AM)  Adding the channel factor would allow you to see some things on a particular channel that are on in the middle of the night - like sporting events.

Did you know that you can choose which channels you want to see in your guide?  It’s under settings -> edit channel lineup, and just uncheck any channels that you don’t want to see.  I have a lot of shopping channels that I just leave off the guide completely.

If you want to ignore everything from 11 PM to 4 AM, then don’t look at the guide for that period.  It’s that simple.   There is no DVR on the market that intentionally shows less data in the program guide.
roberttco February 14, 2015, 10:19pm #3

I think you missed the gist of the feature idea. Removing a channel doesn’t cover it. If I want to watch or record what is on that channel that is sort of hard if the channel is absent. On the other hand the prime time grid had a lot of stuff in it that are infomercials. Hence the reason this is a feature request. If implemented properly Tablo could be the first to offer the infomercial filter.

Sorry but I think Tablo has other things a bit more important to address.

Must be a regional thing - I see little or no such “shows” listed. Maybe our stations don’t do much of that. Regardless, however, why black them out and have “holes” in the guide and wonder what’s not being displayed? What would be the true benefit of not seeing infomercials listed? Simply don’t look and record.

If you want the ability to record a channel, and thus don’t wish to remove it, it’s sort of like books in a library that you can’t stand - ignore said titles and move to the next book.
Just like forum posts that offend or that we don’t like - choose to “not see” them.
I guess if those were not listed you would have blank spaces there.
So the only benefit would be to see what’s playing.
Black spots would be preferable?

@roberttco - Weird… What channels do you have that are showing Ron Popeil in Prime Time?

One way to avoid these for now is to browse in the TV screen by genre.

I’m looking for a similar feature, but not just for infomercials, I would like to go through the list of currently available titles/movie and put them on a don’t care about list. This would shorten my regular browsing of new shows efforts quite a bit. I would say I currently have at least a hundred different shows that are on my browse list, most of them I will never watch, but sometimes something pops up that I want to start watching, so I browse the list often, but would like to have a blacklist filter I could apply to remove the cooking shows, the soap operas, and such that I’ve already decided not to watch

@LJ_LongWing - Tx for the suggestion.

If there are entire channels that you don’t watch (like home shopping) you can remove them entirely from the guide via the channel lineup in your settings screen.

Yes, obviously I’m familiar with the ability to turn off a channel…this doesn’t cover what I need…here’s an example 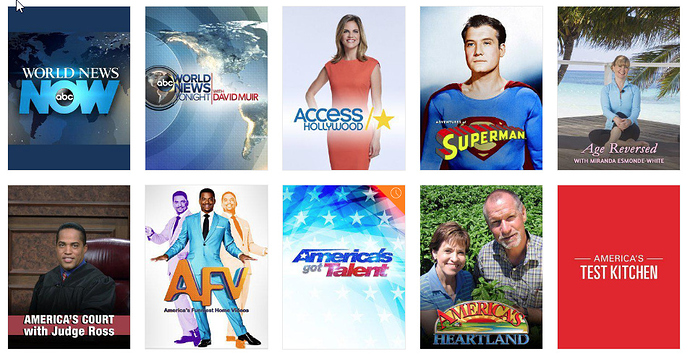 This is just a small list of my ‘All’ TV shows. You can see that I have America’s got Talent marked to record series…but the other 9 I will NEVER want to record…because of that, I would like to be able to mark them in an ‘I don’t care about this series’ list somewhere, so that when I’m browsing my ‘All’ section, I don’t need to look at them…At the moment I have 573 different series available to me on 10 different channels. Most of those series are of little to no interest. I have 42 series set to record new episodes, and currently have 6 ‘one off’ recordings that I have scheduled…it’s my interest in finding those one-off’s and new series that I’m looking for assistance with…this might be an awards show I want to catch, or a movie coming on, or a mini-series…or, as the season comes, a Halloween or Christmas special…these are hard for me to find because there is SOOOO much in my list…

and of course, the ability to manage that list as needed to remove items from it if needed.