Hello. Just bough a tablo Quad. Should be ariving soon. What are peoples experiences with the different tablo apps on different devices? What one performs the best? I currently will be using it on an apple tv 4k box and an xbox one S and will be purchased another streaming box or stick for a 3rd tv. My quation is which one performs the best in terns of fast response, load time, picture quality etc. Is there a difference between devices. Apple tv, roku, firestick, etc
At first though i would presume the apple tv 4k box since it might have the beefiest hardware? Your opions are welcome

We have a blog post here that outlines our recommendations: 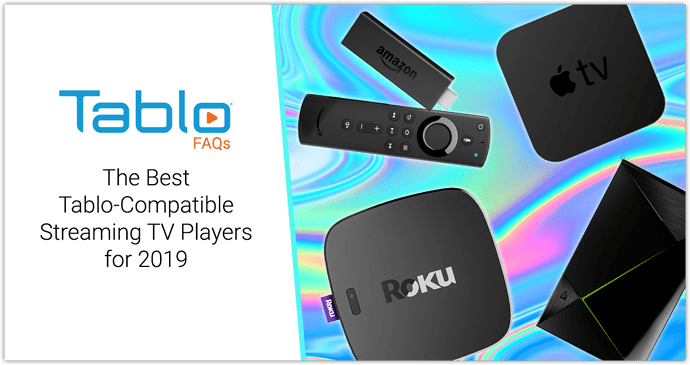 Best Streaming Devices to Use with Tablo OTA DVRs in 2019

Which Roku, Amazon Fire TV, Apple TV, and Android TV streaming devices and sticks are compatible with Tablo OTA DVRs? Which streaming platforms are best for your cord cutting needs in 2019? Keep reading to find out…

The apps are oddly different for different devices. The power of the device isn’t particularly important – it doesn’t take much to handle one HD video stream. What features you get in the app, though… that does change from app to app. Alas, I don’t know of any place that tells you which features are in which app.

My eyes glaze over trying to read and absorb this kinda thing. I’m a trial and error guy. For example, ATV4 app sorts recordings by recent but not using the IOS app. Is that even mentioned anywhere?

I can say ATV4 behaves reasonably well. In addition to IOS I also used a ROKU for a while and it was fine but as noted things just slightly different across many platforms and devices.

it probably depends on what you’re geared with. For example, if you have android phones / laptops, you might want to go with an Nvidia shield or such, if you’re apple then ATV 4k is probably a better option.

Between Roku and ATV, I prefer the option to switch between apps with the ATV, which if I’m not mistaken and from my personal experience you had to close the app to switch to another one with Roku. I like having one input and one device to rule them all, and it’s what I’m getting with my ATV, but again we’re with Apples for most of our devices.

Hello… I use a Roko 3, a Roko TV, an Android phone and an Android Tablet. I have used an Amazon Firestick which I will not use again since it had problems. The Roku 3 is good and I like the remote with the earphone jack so I can listen privately if I want to. The fast forward and back works the best out of all the devices mentioned here with small preview screens to see where you are. This is a big plus. The Android phone app works well and it has a 30 sec forward and 20 second back link on the screen. It would have been nice if the timing was user defined but the 30 S Forward and 20 S Back are workable.

I was looking over Tablo Apps & Compatible Devices, part trying to find some info to help someone, then just trying to figure things out. I realize not all device are created equal. The marketing terminology is vague and truly pointless if there is no reference. Not equally comparing devices/apps doesn’t actually provide answers. I realize that’s can be what marketing is. Eventually, here’s my question. Many devices have as Benefit: Access to all Tablo screens and filters including setti…

It’s a personal preference kind of thing. I have both Roku Streaming Stick+ (4k) and a 4k FireTV 2019 variety sticks both on my primary screen and always find myself in the 4k FireTV side. Your mileage WILL vary… For me, both sticks are crisper than the underlying TCL 55R525 HDTV but the Fire stick seems cleaner.

I believe you are correct about the Apple TV. I own an old old Apple TV and even then the hardware was always snappy. However, I have never tried Tablo on it. I use Tablo on Roku 4k Stick and Premier, I find both to be very quick (for what it does… buffering and such). But maybe the Apple TV is just as good, if not better.

OK then, which device seems to be most responsive (fastest)? Right now I use the Tablo app in my 2016 Samsung smart TV and, well, it is slow. Real slow. I just want to be able to move through the menus and down the live TV lineup without any (or much) hesitation. Right now it takes well over a minute to move down 40 channels.

Leaning towards the FireTV Cube (have Amazon prime) but wonder if it’s not as fast as I am hoping?

Rarely will I watch Tablo on a laptop or android phone or tablet. The Mrs uses her tablet some times for Tablo and is happy with it.

We mostly use Roku’s on our TVs for Tablo. Have a few sticks and an Ultra or two. They are cheap and work fine. We have an Amazon Fire TV as our travelling streaming device. It can do Tablo outside of your network. Roku will not. Roku has more channels than any other streaming device we have.

We have some Smart TVs. Their OS and stores are limited. We have Roku’s on all of our smart TVs. We don’t use their OS at all.

I would recommend seeing if the streaming device has apps/channels for your intended usage. Example, for a time, I used the Spectrum/Charter streaming only service. At the time, the Amazon Fire TV did not have a Spectrum channel. So, it was no good to me.

We use a Shield TV on our main TV and a Roku Ultra on our second TV and are happy with the performance of both.

Best Streaming Devices to Use with Tablo OTA DVRs in 2019

Which Roku, Amazon Fire TV, Apple TV, and Android TV streaming devices and sticks are compatible with Tablo OTA DVRs? Which streaming platforms are best for your cord cutting needs in 2019? Keep reading to find out…

I have tried apple tv, firestick and roku. I like the firestick best as it has the best fast forward feature for fully pre recorded shows. (This feature does not work if you watch a show that has not finished recording). It shows an entire bar showing multiple screen shots at 10 second intervals across the screen so it is easy for me to quickly fast forward and backwards as needed through commercials or get to where I am going on talk shows.

For the record, the Roku app has the same functionality.

I like using the Roku best. Mainly because of the simple remote. Just a few buttons with a good ergonomical layout. Don’t even have to look at it, I can operate it by “feel”.
Unlike my TV remote that has 30+ buttons with a horrible layout. Most of them I don’t even use.

I agree about Roku. The one big complaint that is common is that the darn mute button is too easy to accidentally press. If they moved the mute button off the side and on the front, the remote would be perfect.

One huge advantage of amazon firestick is you can use it anywhere on the internet and ‘remote view’ your tablo. As far as I’ve seen , Roku cannot do that function directly like amazonian/androidian devices can do and requires another device to ‘cast’ to it. Roku insists on searching only the local network for a Tablo. firestick/androidian devices will remembrer the remote/port-forward stuff to get to Tablo from outside home network. probably nvidia shield would act the same way but i haven’t tested it.