I recently setup a 4 Tuner Tablo and purchased an Apple TV 4K in preparation to cut the cable. I was so excited until I

The Apple TV 4K and Tablo are connected to my network via NETGEAR PLP2000s (HomePlug AV2) and all the Pick a Plug LEDs are green, indicating a > 80 Mbps link rate. iPhones and iPads have no issue streaming the HD1080 - 10Mbps recordings I’ve made without any real hesitation or buffering and I have the same experience with live TV. Unfortunately, the Apple TV 4K on the other hand is a different story. Takes a couple of minutes to load a show and it can only go a couple minutes before buffering again. This also occurs when attempting to watch live TV via the Apple TV as well.

Everything is running the latest software (iOS 12 and TVOS 12.0.1). I am unsure what my issue could be, I rebooted everything and I did turn down the recording quality to troubleshoot (will know more tonight as recordings are made in 720).

I also have a Roku Streaming Stick (3600R) that has no issues utilizing the HD1080 recordings (and it’s connected to a HomePlug WiFi Extender) with no obvious buffering.

Does anyone have any suggestions? I’d like to get back to the HD1080 if possible and move forward with cutting the cord.

We haven’t observed any reasons why the Apple TV would have more buffering issues than other platforms. Did you notice any kind of improvement after changing the recording quality?

There was some improvement after reducing the recording quality.

I am starting to wonder if I have an issue with bandwidth on my HomePlug AV2 setup. I’ve had no issues streaming from the Internet in 1080 HD.

Does the Tablo do any compression prior to sending the video to my AppleTV or Roku?

Yes - but you will always receive an average of the recording or live TV quality you have selected (e.g 10Mbps, 5Mbps).

I recently ran some Cat6 across my house over the holidays. I will say that the performance is significantly improved with gigabit wired Ethernet on my AppleTV on the highest quality setting.

I will be experimenting with MoCA 2.0 for rooms I cannot reach through my attic. Hopefully the performance is just as good.

Also consider DECA, it is cheaper.

I have the same problem. Live TV, as well as recordings keep constantly pausing to buffer (presumably). My tablo is wired directly to my Netgear Nighthawk router (R7000). I even bumped the live TV quality to one bitrate below recommended. Everything else (prime, netflix, etc) steams just fine, and I can stream live tv to my amazon firestick just fine too, but my tabloTV is pretty much unwatchable from my AppleTV 4K.

When I wired my house, I installed Ubiquity managed switches. I’ve observed the traffic from the Tablo and at the highest setting it runs 9.5-10 Mbps throughout the entire show or live TV I’m watching.

Is your Apple TV 4k wired directly to your Netgear (you don’t say)? I had a lot of issues using my Apple TV with Powerline Networking. I suspect that I was unable to sustain the high speeds on the Powerline, even though I had AV2 gear. I even played with the various bit rate settings without success on my Apple TV. Hard wiring fixed all my issues.

Not sure what the issues are on your network, but as another data point I am running Apple TV 4 and 4K over Ethernet cable that was installed 20 years ago. I have a TP Link AC5400 router and Linksys unmanaged switches. The Tablo is hardwired to a switch.

No buffering issues at all. My network is pretty simple and everything is running at Gigabit speeds. Obviously the Tablo is running at Fast Ethernet speeds.

I have one Apple TV running on WiFi and also has no buffering.

So the issue must be something particular to your network configuration. I have never used use any power line network gear but it seems the key with powerline adapters is that they need to be on the same electrical circuit to achieve their best performance. They can, in most cases, work across circuits, but their performance will suffer doing so. 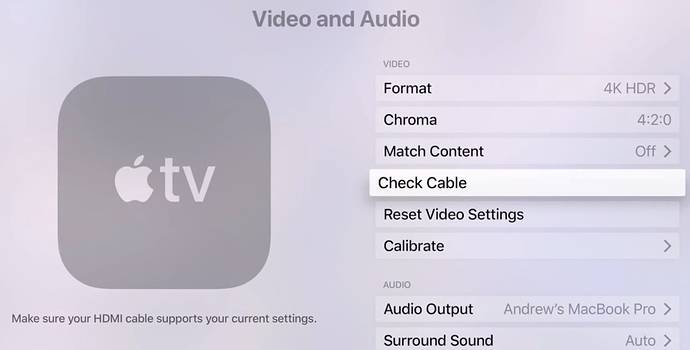 Hi, I see you also have a apple 4k. Im trying to make sure I’m getting the correct settings. I do not have the option of 4k HDR as an option. I find 1080p sdr seems to be a good option for me. I also have the match options in off position. I have a high speed cdmi cable, but just ordered the belkin ultra, hope it helps. Do you have any suggestions? I don’t like the lag time when I turn on match. But I want to make sure my settings are the best to keep tablo operation at peak speed. Also cant see check cable option, is it because i may have done that at some point. Thank You.