Any update on 5.1 audio support

I’m using a fire tv box, and am wondering if I will be able to get 5.1 audio soon.

We’ve been requesting it for over a year, so most likely not.

That’s really too bad. I would say that this is the biggest flaw of the device. This should be the number one item on the update list.

So no, I wouldn’t hold my breath.

I’d hold my breath if it would do any good. But my wife doesn’t like me in purple.

I just ordered the 4-tuner model before seeing this. I assumed Dolby 5.1 was supported - suprised to see it is not. Now I’m second guessing my purchase.
Does Tablo not realize sound quality is a big part of the TV experience? They go in to detail on how picture quality is better than cable due to higher bandwidth and then serve up crap audio. Hopefully they fix this soon!

Tablo doesn’t realize how important this is. Someone opened a thread on Reddit cordcutters last week asking for an OTA DVR solution:

r/cordcutters - Looking for some clarification on PVRs before I cut

After 21 comments, mostly positive about Tablo, I let the original poster know that it doesn’t support 5.1. His last comment - “Definitely a contentious issue for me. Glad you mentioned it” pretty much implies that this negated his decision to buy.

I just wish Tablo would definitively say if it’s even doable with the existing hardware, as well as provide an approximate ETA for this so that those who want 5.1 can look at other solutions such as Tivo or DVR+.

I just wish Tablo would definitively say if it’s even doable with the existing hardware, as well as provide an approximate ETA for this so that those who want 5.1 can look at other solutions such as Tivo or DVR+.

This is their last official post about it back in August of 2015.

Dolby 5.1 is not impossible. We do have in-house folks that work on our hardware and the firmware that supports it.

Adding 5.1 requires a significant amount of work both from our internal team as well as support time/hours from one of our chip providers which is why it hasn’t been tackled yet.

I contacted them today as I was considering cancelling my order. I got the usual ‘it’s on our road map’ response. I then asked if the hardware I was buying did support it with a firmware update, or might I be forced in to buying new hardware at some point. They did confirm the hardware does support it and this would be a firmware only requirement. So I asked for an ETA and got the usual ‘we can’t give an ETA’ response. So frustrating! I’ve got to believe more people want this than are speaking up, although I guess those that do want it are happy to spend $100 a month in cable?

When we voted towards the end of last year, I put 5.1 as the most important. I think 5.1 should come PRIOR to new devices (Apple TV and Smart TV). Unfortunately.that’s not what they are doing.

I’m surmising the majority of TV watchers don’t use an AVR. Of those that do, there are probably fewer that care or can tell the difference between 5.1 and a matrix-ed surround sound. I have a buddy who has his AVR set to send the same signal to all five speakers so he can hear it

(shame on the house builder to put the front speakers in the ceiling firing straight down).

If I were Tablo I’d do the same - try to get as many devices into as many homes as possible. I don’t blame 'em one bit.

I’m surmising the majority of TV watchers don’t use an AVR. Of those that do, there are probably fewer that care or can tell the difference between 5.1 and a matrix-ed surround sound.

I watch Tablo shows on three TVs, my computer, my Android phone, and an iPad. Of those, I have only one that has a true surround sound system. So I do agree with you. The support for so many platforms is the biggest selling point of the Tablo.

For those times I really want surround sound out of my TV (usually sports), I just watch it live. 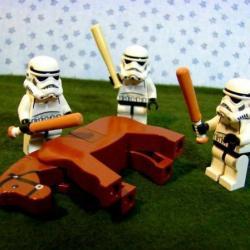 They might be able to crank gain up slightly with the current chips? I notice audio is a little low compared to most every other device (2 channel) in my common playback environments.

It’s not a deal breaker for me. I knew it going in and as long as marketing literature never publishes misleading language about it, I’m good status quo.

Might be a great reason to upgrade hardware someday down the road?

It’s not a deal breaker for me. I knew it going in and as long as marketing literature never publishes misleading language about it, I’m good status quo.

I agree. They never advertised it, they attach your lifetime subscription to your account, not the hardware.

Great pic MotobikeMan! I don’t think we’re intentionally beating a dead horse here. 5.1 audio is a big deal for many, especially for great action shows like The 100, Flash, and Gotham. I totally get Tablo wanting to maximize the devices it supports, but I think 5.1 audio would push fence-sitters over to Tablo and I think there are many. We all want Tablo to succeed and have been asked our opinion for features on several occasions (December 7 2015 was the last one). Pretty sure 5.1 would be either first or second on the list, but I don’t think that list has been published.

The no Apple TV client until I have my 5.1 just plain made me laugh…

As much as I want 5.1, I agree that the Apple TV app needs to come out first, if only for people to stop posting in that Apple Beta Testers thread which has 0 meaning until Tablo ANNOUNCES A BETA.

But seriously, Apple TV support will be a nice milestone for Tablo, and at that point they will have most of their audience covered with a solid app. Hopefully then they can start implementing features people really want, such as 5.1 support.

I understand that many tablo users, use the app on tablets or phones. I myself use these as well. However as a cord cutter, I use my big tv as well. I think most would agree that watching your favorite show or sports team on your main screen is enhanced greatly by 5.1. Apps like Amazon video and Netflix both have 5.1. It seems to me that the technology is out there, and that it should definitely be a priority for tablo since all major network programs are broadcast with 5.1. Honestly I can’t imagine that this wasn’t on the radar during conception of the device. I am coming to the end of my trial period with tablo, and am on the fence as to whether or not to continue with it. I do like it but I might look into the channel master and see if that supports the superior audio quality.