im about 40 miles away, so I hope so but keeping my fingers crossed … I sort put installing a low vhf antenna till this whole mess is sorted… I really dont want to be tromping up on the roof or attic farting around with antenna configuration every time something changes.

For the $40 million WGBH got for going low VHF in the repack auction, they should send someone out to your house to install a low VHF antenna. They now have the money to do this as a favor to OTA viewers in Mass… 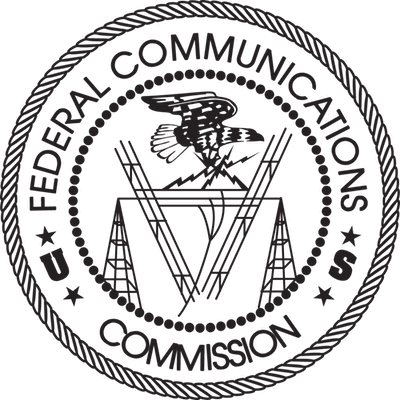 The FCC has announced the results of the Broadcast Television Spectrum Incentive Auction as $10.05 billion will be dispersed from wireless providers to licensees who either will turn in their station’s license or move to a VHF frequency. Many of the...

The list of stations - the money they got for moving is here:

Only those going offair or moving to vhf.

Since everyone else is showing-off their antenna installations, I figured I’d do the same.
Here’s my ANTOP AT-415B UFO HDTV antenna mounted on my roof using a Winegard DS-3000 39" J Pipe Mount.
It’s all connected to my 4-tuner Tablo DVR in my family room, which went from getting 19 area channels ‘ok’ to getting 26 area channels GREAT at 100% signal strength. The chimney isn’t in the way of any towers since there are none in that direction, so I didn’t have to mount the antenna any higher than the chimney.
I decided to go with an omnidirectional antenna because I have broadcast towers in three directions from my house and would have to get three separate antennas otherwise. The table-top antenna I had, previously, was aimed halfway between the ABC/NBC/CBS towers and the CW/FOX towers which caused all of them to come in at about 75% to 85% - even with the antenna on the top floor of my house - and I couldn’t even get anything from the PBS tower which was in a third direction. So the final decision on a new rooftop antenna was to get an omnidirectional antenna so I can receive all the signals from all the Omaha, Nebraska area towers for a change.
I just wish I could put some flashing LEDs around it to give it that real “UFO” look! 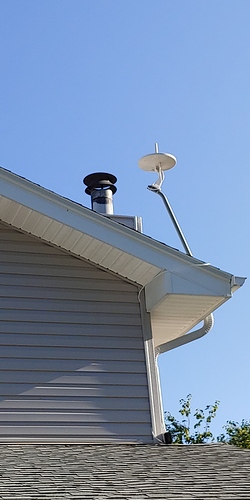 Nice install and great use of the pipe mount. I’m using one of those on a guest house, the results are sterling. I also like the way it looks.

That’s a really good antenna. My sister bought one of those and she loves it. She gets all the channels & they come in really clear. I get perfect results with my cheapie antenna but when I move to a new place I’ll upgrade to that one.

Plus. A friend of mine bought something similar to that from Antop, a space aged design and he get all possible stations with it.

I showed my new antenna to a friend who’s quitting cable, he got an antop instead. Paid almost twice as much as I did & he says its really worth it. He stuck it to the side of his house & you can barely notice it. Getting 40 tv channels from it, about that same as mine.

Where did you find a long J pipe like that? I want a longer one as I want to raise my install without having to buy a longer ladder for a shorter pipe.

@Zman_Tablo, click the link in my OP and it’ll take you to the Amazon posting for it. However, they only have two sizes listed - 22" and 39" (IIRC).

@sodaman_2000, good idea! Gonna have to do something to jazz it up some to give it an alien look.

Gonna have to do something to jazz it up some to give it an alien look.

May we recommend some glow in the dark spraypaint? Could be a hilarious way to freak out your neighbors

I second that emotion.

The other main difference was that most of the other antennas (like the yagis) had to be rotated to get some channels whereas the Antop did not have to be turned (identical to @yardbird’s review at this forum).

On two hard-to-get channels (WTXFDT & WNJB) that Antennaman uses in his testing for weak signals, it got them as well as all the other antennas (45% range).

This is one of the channels I subscribe to, it is excellent.

One of the things I’ve noticed about the Antop is the signal quality it gets. It may have signal strength equal to or greater than other antennas but where it shines is in the quality of the signal. A strong signal can still mean pixelation. At Amazon, a lot of the reviews focus on the picture quality from the Antop (less pixelation overall). Consistency in signal is important.

Cord Cutters News confirms this aspect of the Antop - consistency. Here’s his review (he places it in the top tier of antennas tested):

I’m trying to decide between the Antop 400BV and the 415B. I use an attic mounted 30+ year old Yagi and I previously tried a ClearStream 4V. Both provide very similar and very good but not perfect reception. I’m using a 40ft quad-shield RG6 cable and the signal is not amplified and I get 27 Db S/N on all stations except 23 Db on 41.x. I have a mix of UHF and VHF-HI stations and my ZIP is 55346 and the various antenna locators show I have a 48 degree spread between the antennas. My major network stations are near perfect but 41.x and 33.x are sometimes problematic. Will the multi-directional 400BV handle the 48 degree spread or should I opt for the omni directional 415B? If I forget about the 41.x channels (ION), my spread is a miniscule 4 degrees. Here is the antenna information for my area:
https://www.antennaweb.org/Stations?Address=Eden%20Prairie%2C%20Minnesota%2055346%2C%20United%20States&AntennaHeight=True&Latitude=44.87&Longitude=-93.49