Presently I’m seeing between -20 to -50dbm per TV Fool since I’m only 7 mile from the tower. Do y’all see there being an issue with overdriving Tablo and would a 4-tuner unit help since that would split the signal strength?

George,
What kind of antenna do you have in the attic on top of the roof? How many rooms…coax ports are u feeding?
Yes, u will probably overdrive a 4 tuner tablo because I am 18 miles away and just needed the channel master 4 port distribution amp cm3414
I did try the wineguard 200 ppreamp and it got worse reception
I get 20 720-1080 and 25 480 stations
So back to the 4 port amp

I was worried about over driving but was no problem antenna is a Channel Master Digital Advantage 60 on roof. Directional antenna, 90% of stations in one direction but I have many trees and live in a slight valley. Receive around 49 channels the network feeds in HD. Not using distribution amp but Tablo 4-tuner to Roku so a single run to rooftop only. New RG6 to roof from Tablo w/o any spices distribution to adjacent Tablo via Ethernet switch then to my remote Wi-Fi router, the other TV is Roku wireless and works great but it is only 25’ from WI-FI router.
My major complaint is the loading delay with Tablo it shouldn’t take as long as it does to load channel My TV’s are much quicker, I feel tuner quality electronics is lacking - should bring up picture/sound prior to buffering.

Good to hear you got it cleared up. I’m here to stay for the long-haul with tablo I think they’re onto something right, but like everything else it will take time and lots of updates but I’m OK with that. Besides, it’s working great with Apple TV 4

Your Tablo is converting the incoming OTA signal to a video file and then sending that file to your tv. So it will take time for that conversion. You are not watching th OTA siganal like if the coax went straight to your tv.

Have to give it time to transcode the video. Gotta be patient.

With 4 tuners and only one or two active it should come live first IMHO.

It simply cant, at least not with most streamer boxes anyway.

Roku (for example) can not play back live OTA signal, nor can it play video in non compressed mpeg2. For Tablo to work on Roku it MUST convert it to a video type it can play and that takes a few seconds.

The only way Tablo could bring up video instantly would be if it offered a direct to TV connection, which some have asked for but it counter to what the current Tablo was designed for. Many competitors already offer such an option as well as the new (up and coming) Tablo which will connect directly to the NVIDIA shield, but the existing Tablo was designed to sit on the network directly and provide universal video to MANY different receiving boxes… Hence the conversion.

That makes much more sense but it may behoove them to put a secondary output on the box in some future design but it all makes sense now, thank you

The Hauppauge company have a neat utility that works with their digital tuners. It is only 1679 bytes. It would be great if Tablo Programmers could incorporate a similar product in their diagnostic screens. 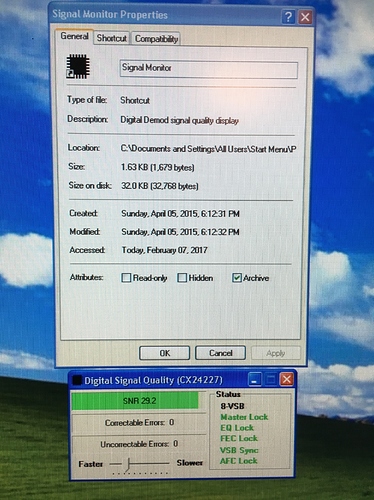 Look into the Tablo DROID software DVR engine for use on the NVIDIA Shield. It records in the native MPEG2 video, so no delay in tuning channels.