An Anniversary Thank You

Five years ago today, we walked across the parking lot at Tablo HQ to deliver a 2-Tuner Tablo OTA DVR to our first paying customer.

Today there are Tablo fans in every single US state and most Canadian provinces. We are SO thankful for each and every one of you, and for your continued support. 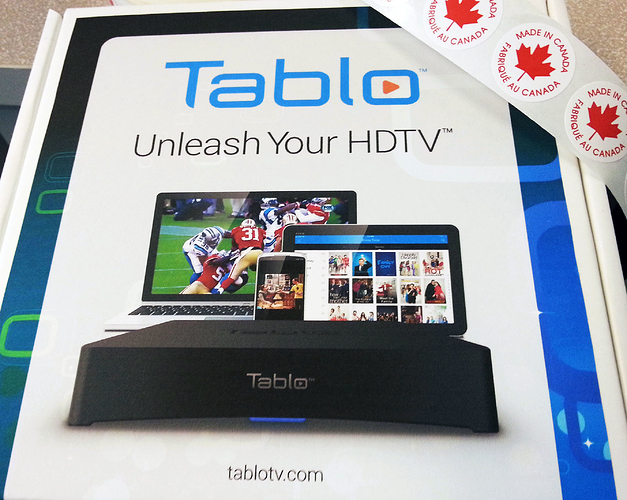 After reading one of your first press releases (https://www.tablotv.com/press/tablo-dvr-cord-cutters-now-available-pre-order/) and seeing some video from that January 2014 CES, I took a leap of faith and pre-ordered the original 2-tuner Tablo. Just having it on order inspired me to cut the cord and get everything else in my house ready for it.

Is there anyone here that owned a Tablo before the first big shipment was released in April 2014? What devices did it work on (I think it was just iPhones, iPads, Android phones, PCs, and AppleTv via casting)

What devices did it work on (I think it was just iPhones, iPads, Android phones, PCs, and AppleTv via casting)

We basically had the web app and the iPad app which you could use with the Apple TV via Airplay.

I remember creating a bookmark for the web app on my iPhone before we had smartphone apps.

Then we cobbled together our first Roku channel which was not pretty, but did the job.

I had no clue the product was so new when I bought our first one… And while the Roku App was basic, it worked very well.

This is great. Five years in a tech industry is half a lifetime, it’s worse than “dog years”. I’ll be hanging on for the ride.

My wife says this was one of our best purchases (3 years ago). Used daily as if it was a basic household appliance - has lived up to everything we expected and wanted in a DVR. Cordcutting, OTA + Tablo has saved us about $5,000 over the past three years. Congrats

I’m surprised you’re not in every Canadian province. I suppose that, when it comes to Canada, if you want to reach all of it, you must first reach Nunavut. (Bad pun; I’m sorry).

I’m surprised you’re not in every Canadian province.

Because of the way broadcasting is set up in Canada (content and the ‘pipes’ are owned by the same 3 companies) as well as the lower population, there are fewer (or no) OTA channels available for Canadians.

Folks in Toronto and Montreal have the biggest selection and we have a good number of customers in other major cities like Ottawa. There are a few spots near the border (shout out to Windsor) that have good coverage too.

when it comes to Canada, if you want to reach all of it, you must first reach Nunavut.

Kind of hard when there are more polar bears than OTA towers there.

It’s been amazing to see all the improvements over the years. I bought my Tablo just before the Fast Forward thumbnails and Live TV grid became available, and since then, we’ve seen some really nice enhancements, such as the ability to modify recording times, and change channels without having to exit a show I’m watching and go back to the guide. When I made my purchase decision, Tablo was the best OTA DVR for my needs, and these improvements, and others have made Tablo even better. Congratulations on the Tablo 5 year anniversary!

I totally agree with you and its actually been a fun ride!